Late Saturday night, at 11:01 p.m. shots fired near a pub in Omaha, Nebraska struck and killed a 22-year-old black man named James Scurlock. Numerous sources including KMTV News are reporting that the owner of the pub, Jake Gardner, a who says he is a former student at Humboldt State University, fired the fatal shots. [UPDATE: Humboldt State University says they did not have a student with that name in the timeframe he listed. “It’s possible he changed his name, or some other reason he’s not indicated in our records of attendance, said Grant Scott-Goforth, spokesperson for HSU]

According to another post by Lil Christ Kross, “Jake taunted these kids and went to the sidewalk to confront them with a gun instigating the situation… .” 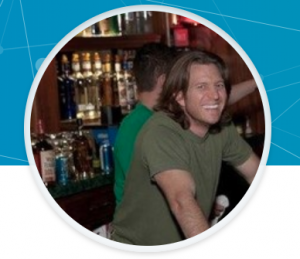 Gardner, a marine from 2000 to 2004, may have been upset because he was fearful his business would be harmed during the protests. The Daily Mail states, “Scurlock was killed outside a business that had been damaged earlier in the night.”

A screenshot purportedly of Gardner’s Facebook page shows him posting about two hours before the shooting, 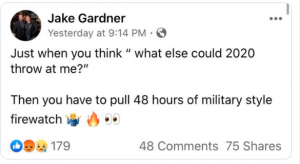 According to Omaha Police, “The investigation is ongoing. Anyone with  information or video of the incident is urged to contact the Homicide Unit (402) 444-5656. Information can also be reported anonymously through Omaha Crime Stoppers at (402) 444-STOP, at www.omahacrimestoppers.org or on the P3 Tips mobile app.”