This is a press release from the Yurok Tribe: 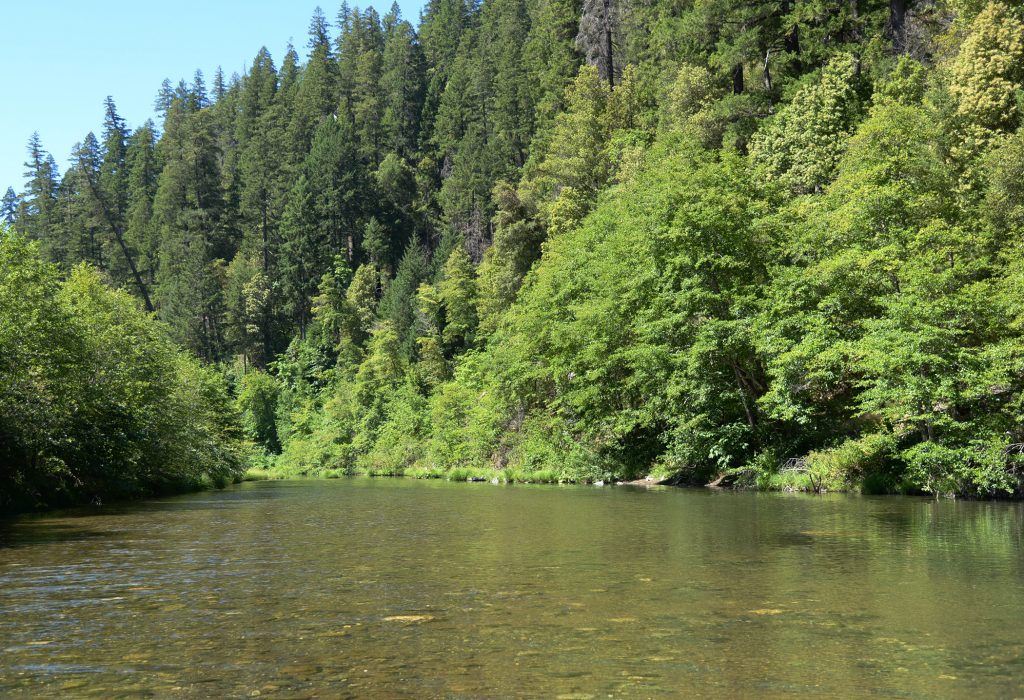 Starting on Monday, September, 24, the Yurok Tribe and the Watershed and Research Training Center, in partnership with Columbia Helicopters and others, will begin implementing a history-making fish habitat restoration project on the South Fork Trinity River, where spring Chinook salmon stocks are on the cusp of collapse.

The spring salmon population on this major Klamath River tributary is currently less than 1 percent of its former size, a consequence of severely impaired ecological conditions in the watershed.

“The salmon of the South Fork Trinity and the Klamath as whole are in serious trouble,” said Richard Nelson, the Director of the Yurok Tribe’s Watershed Restoration Program, Yurok Tribal member and subsistence salmon fisher. “Nue-mee ney-puy (Spring Chinook salmon) have sustained the Yurok people since time immemorial and if we don’t do something now, we are certain that these culturally important fish will cease to exist in the very near future.”

The South Fork Trinity Heli-Wood Loading Project will accomplish several objectives, ranging from improving water quality to creating new habitat for juvenile and adult salmon. Over four days, a Columbia Helicopter team will work with Yurok fisheries biologists and engineers to place approximately 300 whole trees in predetermined locations within a five-mile stretch of the river. The logs, up to 150-feet in length, will be positioned individually and in configurations, which mirror the big wood features found in healthy river systems. This proven biomimicry technique will facilitate the formation of wetlands, new side channels as well as many additional fish friendly features currently absent from the South Fork.

The South Fork Trinity River, the longest undammed river remaining in California, is one of the four tributaries that produce the majority of the salmon on the Klamath River. Prior to just 1964, more than 12,000, spring Chinooks used to return to the South Fork each year. Last year, only 12 of these fish made the migration back to the federally designated Wild and Scenic River. The South Fork’s federally listed Coho and fall Chinook salmon are also struggling.

“In a half century, humankind has nearly wiped out these crucial fish runs,” said Nelson. “This is completely unacceptable. While we did not create this problem, we could not sit idle while these fish hover on the brink of extinction.”

Central to this project is the use of the aircraft to precisely place whole trees, weighing up to 25,000 pounds, at strategic sites throughout this remote stretch of the South Fork Trinity River, located near Hyampom, Ca.

“Establishing these complex structures in the system, with no artificial anchoring, will emulate the natural ebb and flow of wood into the river, providing diverse and constantly evolving habitat for fish and wildlife,” said Joshua Smith, the Watershed and Fisheries Program Director for the Watershed Research and Training Center.

Large wood features were common in the South Fork until in 1964, when a catastrophic, 100-year flood event washed out many these salmon sustaining structures. During the 1950s and 1960s, most of forests surrounding the South Fork were clear cut, which drastically reduced the potential for natural wood recruitment and made it possible for heavy rains to send giant loads of sediment into the watershed.  The river’s previously numerous, cold pools, a critical habitat type for both adult and juvenile salmon, are filled in with silt. Former salmon spawning grounds are also blanketed in the fine material.

Depending on their placement, these wood formations, whether constructed by nature or fish biologists, can promote numerous positive, in-river responses, including enhanced water quality, the creation of deep water habitat and the dispersal of salmon-suffocating sediments from the river bed on to the bank, where the fertile substrate will support the development of much-needed, wetlands. The log configurations also create places for juvenile fish to take shelter from predators and supply a source of food for the colonies of insects that baby salmon subsist on during the most vulnerable part of the fish’s lifecycle.

The absence of these critical, wood-based components is significantly restricting salmon production on the South Fork. The river no longer has the diversity of features that salmon need to thrive. The intent of the South Fork Trinity Heli-Wood Project is to begin the lengthy process of reinstalling these fundamental elements within the once prime salmon spawning stream.

The South Fork Trinity is a significant distance from the Yurok Tribe’s ancestral territory. After seeing that there was not a coordinated effort to rehabilitate this critical salmon spawning stream, the Tribe reached out to the Watershed Center, the US Forest Service and multiple local land owners to form a formal partnership for the purpose of initiating this project.

“We are very excited about this new collaboration with the Watershed Center, the Forest Service and local landowners,” concluded Yurok Watershed Program Director Nelson.

The Yurok Tribe is the largest Tribe in California with nearly 6,000 members. The Tribe’s ancestral territory comprises 7.5 percent of the California coastline, spanning from the Little River to the south and Damnation Creek to the north. The eastern boundary is the Klamath River’s confluence with the Trinity River. The Tribe is a leader in natural resource management, fisheries restoration and cultural protection.

The Yurok Tribe is currently the largest federally recognized Tribe in California and has a Reservation that straddles the Lower Klamath River, extending for one mile on each side of the River from the mouth at the Pacific Ocean approximately 45 miles upriver to the confluence of the Trinity River. The Tribe’s major initiatives include: natural resources management, fisheries protection, watershed restoration, dam removal, condor reintroduction, cultural revitalization, language preservation and land acquisition.

The South Fork Trinity Watershed holds vast potential for restoration and wild salmonid recovery. The bulk of our local watershed stewardship work occurs predominantly within the South Fork Trinity Watershed where we are diligently working to build resiliency in the landscape through restoration, monitoring, prescribed fire, collaboration and networking, and the ongoing development of innovative and adaptive strategies.

This is an awesome effort on behalf of everyone involved. Way to go, good luck, and thanks from me and future generations.

Wonderful! As soon as this matures, local groups can use the data to justify doing it in the South Forkof the Eel. I’m predicting this is going to have big impacts on river health and fish populations. What I wonder about is the timeline.
It’s expensive, but on the other hand it’s also only four days and a helicopter crew. And acquiring 300 mammoth trees is also real work.

Wonderful! Thank you Yurok Tribe. What an uplifting and beneficial project!

Great news for the fish.
When I hear all of the negative
Talk about the natives fishing
Rights I know that if it wasn’t for
The Yurok and Hupa tribes fighting the Government for water and the fish we would
Not even have a RIVER!!!!

Sounds like exciting, but dangerous work. Would be nice to see a beginning in river restoration.

This is great news!
I just wish there was more being done to save the Eel River and it’s tributaries.

This is great news. I’m grateful to all involved. TY

This is great news. I’m thankful to all involved. Let get started on Eel River watershed soon.

Way to go! Mattole did the same helicopter whole tree placement of over 400 trees with good results in the past couple of years. Last year’s Chinook run was the best since 1980. All our rivers need wood if we are going to get the salmon to come back.

Great job Team! This work has definitely turned around the salmon runs on the Mattole. Yes we need this on the Eel as well. Good luck and stay safe. Gnome

Great investment in the future. Can anyone share which reaches of the SF are receiving treatment beyond the vague: 5 mile “remote stretch of the South Fork Trinity River, located near Hyampom”?

Guest
Guest who?
Reply to  Beel

Many if not most stretches of the SFTR are remote. The sections they are setting wood are historically the most productive in terms of spawning habitat, and pretty decent juvenile rearing habitat. The logs will help in that regard. The channel is pretty impacted by the ’64 flood. It’s still flushing out millions of yards of material stockpiled in the floodplain. Meanwhile, the climate has warmed, to the point we don’t get the same amount of snow, and it doesn’t stay as long into the summer.
The river is warming, refugia for incoming adults, juveniles, and out migrating smolts shrinks accordingly.
I used to work for CDFG counting these fish’ progenitors…charting the demise as it seems.

Years of lousy voting has gotten us to this place. Let her b...

Well…the original judge in this hit-and-run was Judge ...

To be clear, this is not an article written by a reporter. T...

[Update: Not as Reported] Report of Vegetation Fire on Dyerville Loop Road

Somebody needs to keep an eye on these guys…

[Update: Not as Reported] Report of Vegetation Fire on Dyerville Loop Road

That’s not a burn pile. Either they lost control of th...