After a Car Wreck, a Local Man Survived ’18 Hours of Cold Hell’ 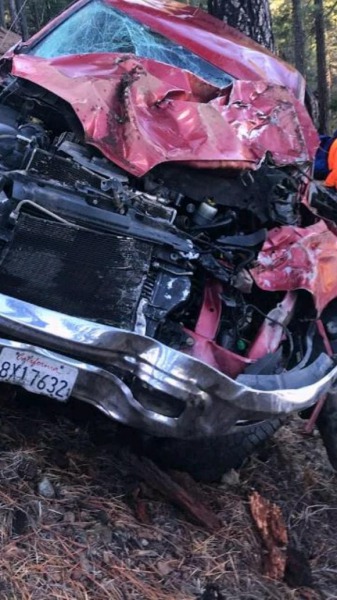 A photo taken after the crash shows the crumpled front end of Dana Porter’s pickup. [All photos provided by Dana Porter but taken by Elijah Burke]

About 5:30 p.m. on January 3rd, Dana Porter was heading west on Hwy 36 between Wildwood and Hwy 3 in his Dodge pickup. He had just called his family and told them he’d be home by 8 p.m. but he would spend the next nearly 18 hours in a cold hell after he says he was run off the road by another Dodge pickup.

“It was dark and there was like slushy snow on the ground,” he told us from his bed where he’s recovering. “Me and my two dogs–a blue heeler and a black lab–were in the cab.”

About halfway between Wildwood and Hwy 3, Porter said he saw a black suburban that was brand new but all muddy coming towards him. There were rocks in the road so the vehicle swerved into his lane but went back into theirs in time. “But, right behind them was a…I think it was a white Dodge…between a 2010 and a 2014. It just looked like a hill truck, a nice truck maybe a headache bar or a light bar.”  Porter, who has a major concussion that can cause memory problems, says they were in his lane and he doesn’t know if they hit his truck or if he just swerved to avoid them.

In any case, he came to inside his truck (he later heard the pickup was 410 feet down a steep hillside) near a creek. “When I woke up, I’m thinking well this isn’t a good spot to be,” he explained. “I got to get the hell out of here. [The truck] was making all sorts of weird noises…I could hear a lot of noise and there was falling debris. [The truck] kept rolling. There was smoke and diesel.”

Having recently seen a pickup that wrecked catch fire and burn quickly, Porter feared he might die. “I’m going to get out of here or I’m going to burn to death,” he thought. “I cut my seat belt…[I used a] seat belt cutter my mom gave me a few years ago. It’s on my right seat belt plug in.” 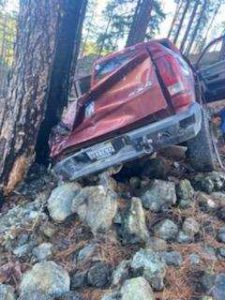 Truck smashed near a tree on the steep slope.

Porter said the door was jammed. “I had a lot of blood on [my] hands and couldn’t open [the] door…Cause it was smashed shut,” he explained. “It was all very confusing.”

In the thick darkness and reeling from the accident, Porter said he was disoriented. “My lab was right on me. My heeler was scared and run off. But she came back.”

After sitting for a bit, Porter took stock. “I had broke my front and my back tooth,” he explained. “My mouth was full of blood and dirt.” He also said his ear was “ripped apart” and side of his face was badly scratched up.

Porter said he fumbled his way to a creek. “I washed the blood and dirt out of my mouth.” But in doing so he fell in the water. With snow on the ground, he now was getting colder fast. He had lost his cell phone in the crash but he did have his hunting jacket on with a can of sardines in one pocket and spam in the other. One pocket also had a flashlight.

Even as disoriented as he was, Porter said he knew he needed to leave clues for searchers if he left the area, but he was afraid to stay still as he was so cold. In addition, he thought he heard emergency vehicles in the distance and thought he walk towards them. “I found a big log with no bark and  I wrote in blood an arrow pointing downstream so they’d know which way I went,” he explained. “I thought I heard sirens. I started walking towards them.”

He stumbled his way downstream with a flashlight from his pocket that was dimming but discovered what he had thought were sirens were coyotes calling. But, here he thought he might have found something to help. There was signs of an old marijuana grow. He poked around and found a duffle bag with clothes but unfortunately they were soaking wet. He strung these out in hopes they would provide clues on where he had gone.

As he moved, he said he tried to keep breaking branches.

Eventually, he sat. “One of the dogs–my heeler–wanted to play fetch and kept bringing me sticks…. I had a lighter so I built a fire.”

At first he felt hope. He said, “I’m a hunter. I’m in good shape. I figure I’ll be alright. But, then it started snowing. Then it started sleeting. It started raining. My fire started going out.”

He said he thought, “I’m in trouble.”  At first he tried to dig up under the brush. His lab came and snuggled him. “She crawled up under my neck between my hood and my neck. She was shivering and whining. She was freezing. She didn’t want me to go to sleep.”

And she wasn’t the only one. Porter’s girlfriend kept appearing. “Every time I closed my eyes, my girlfriend told me to wake myself get up and go home. She said, ‘You need to go home. You have a family.”

So Porter said he sat up. “And I had to start moving as I was soaking ass wet and I was cold….I crawled and walked.” He said he kept one hand on his lab–“I used her for search and rescue before.”  He kept stumbling in the pitch dark and his lab would balk and whine if he started to go somewhere unsafe. “I walked and walked until I found a outcropping. I dug out with my hands and my dog dug with her paws until I could get my head dry under it. By that time it was 10 at night I guess.”

The two snuggled together. “My heeler was keeping watch in the pouring rain,” he explained. “I love the dogs they stuck with me through the night.”

But even with his head dry, he was freezing. “I was getting so cold I was being incoherent,” Porter said. “Ice was starting to form up on my clothes. I was soaking wet from falling in the water and the rain…Then I started walking and used my lighter. It would flicker out. Then I would snap it on again… I had my dog by the scruff of the neck and she would let out a high pitch scream if I got ahead of her…Some of those spots I could fall off…[Once] I heard her go down a waterfall. I thought I lost her.”

His ears played tricks on him. He thought he heard music from a boom box once and tried to make his way towards the sound but soon found out that it was just water cascading and hitting the rocks.

“I walked and walked and crawled and fell down,” he described in a voice almost devoid of emotion. “The area had burned so the trees had slid. I had to crawl over [the downed trees], I had to climb over them…I was just praying….I started slipping and I grabbed a fir tree. I thought I was going to freeze to death.”

He kept fighting because he felt he had to survive. “[I] was pissed I was letting my 9-year-old son down and not coming home.”

But then it started getting light. Porter said, “I could see my feet. I couldn’t give up. I knew they’d be looking for me…I had the sardines. I must have them in my hunting jacket for years. I knew they were good.” He tried to eat them but he was nauseous. “I almost threw up,” he said. “I gave one to each dog.” Eventually, he forced himself to eat them.

He said he walked for miles. In one spot, he saw where a cat had pushed a road across the creek. He had to make a choice and go either left or right. He went left scraping arrows in the dirt for searchers to find.

“I hiked about four miles,” he explained and then realized that he was going the wrong directions. “I was up on top…Son of a bitch.” He had to hike back the way he came. “All the arrows I scraped on the road…I had to go back and change them.”

Once in a sunny spot he fell asleep. He awoke with a start to the sound of a plane. He thinks it was a search plane. He tried to signal it using the sun and a glass bottle he had found overnight and put in his pocket for that purpose but the searchers didn’t see him.

“I walked down that road and crossed the stream multiple times,” he said. He heard his dad tell him what to do when he got lost, “Go downstream, there is always somebody and it keeps you from going in circles.”

Eventually he heard a chainsaw off in the distance. He had to climb a hill to get to the source of the sound. “There was a guy running a saw,” he said. He didn’t want to scare the guy so he stayed a distance away and whistled. “I knew I looked bad…I have a camouflage jacket on and I’m all bloody.”

The man contacted 911 and unwilling to wait Porter kept walking until he met up with emergency crews on the road. “I walked down until I could hear engines coming,” he said. The Cal Fire crewmember looked at him and said, ‘You’re the guy we’re looking for.”

Porter was still disoriented and has trouble remembering all the details but he does know the emergency personnel started to help him. “The ambulance [crewmember] got me some blankets…I told them I wasn’t leaving without my dogs…Ambulance driver cleaned them up with the towels…She even got down on her hands and knees and scrubbed the dogs up with a towel. The CHP officer let the dogs in the back of his vehicle….They were kind people. ”

Porter said he was taken to the hospital and there he learned that family and friends had been looking for him all night.

He called what he went through “18 hours of Cold Hell.” But, in spite of all the suffering, he’s grateful for everyone who tried to help.

“I would like to thank Elijah Burke and Weston Downs for searching all night and morning [as well as my] brother and family…and my persist step brother Chris Arnold for harassing everyone in the county to help find me,” Porter said. He also thanked Brad and Jen Jack’s, as well as Colt Amen who also helped search. His parents and his niece, Hannah Arnold, who “have been there 24/7.” He is very grateful also, he said, to Cal Fire, Trinity Life Support and the CHP including the planes and the helitack. “[The] Chp officer had upmost respect for myself and dogs along with Cal Fire.”

He explained that he was still confused about all the details–“I’m bruised from my feet to my face”–but it was good waking up with his “angel” girlfriend holding his hand and crying and his family at his bedside.

“Now I’m looking at hundreds of thousands of dollars in bills,” he told us as he only had $10,000 in medical insurance on his vehicle policy. “But if I didn’t have the power and knowledge to survive, I’d be dead.”