In Defense of the Stars: The Use of “Mixed-light” Greenhouses Is Changing our Night Skies and May Be Altering our Nocturnal Ecology

The following piece is a guest article by Kyle Keegan. The numbers refer to citations at the end of the post.

Dark skies can be viewed as an imperiled resource, not unlike ancient forests and wild and scenic rivers. Until recently, rural Southern Humboldt served as one of the last great nocturnal landscapes in our state; star-lit skies sheltered by the vastness of the Pacific Ocean and the ruggedness of our inter coastal mountains—a rare and special place where locals and visitors alike could view our planet’s solar system unmolested by the excessive glow of nearby cities.

The current trend of “light-assisted” or “mixed-light” greenhouses in Southern Humboldt is rapidly changing our night environment, stealing our dark skies. The experiment of illuminating our watersheds might seem like a benign form of pollution in comparison to other documented impacts associated with the cannabis industry, but an increasing body of scientific knowledge tells us that altering the day/night cycles of environments can have a profound effect on the physiology of human and nonhuman species, as well as ecological systems.5,7,8 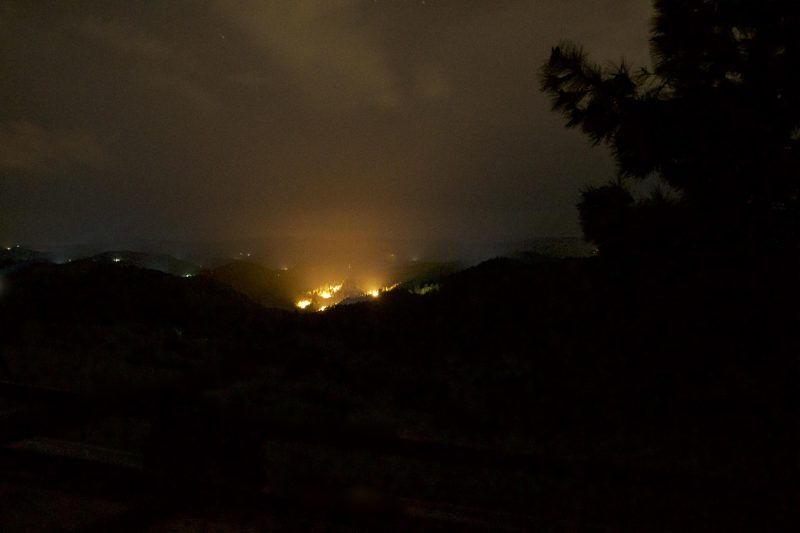 (Looking south from Elk Ridge into the Mattole watershed. Two years ago, this area was mostly black at night. As of 2016, the skyglow of this sub basin in early spring now rivals Garberville. Photo was taken two days before the new moon in May 2016. [Photo by Kyle Keegan]

Light pollution is now being considered as one of the hidden drivers of biodiversity loss and in recent years has garnered the interest of scientists worldwide. (See here and here.)4,7Aside from being unneighborly and disrespectful, the severity of light pollution being imposed on our communities far exceeds being a visual “nuisance.” Disrupting the circadian rhythms of our watersheds must be recognized as a serious environmental threat. (The “circadian rhythm” is an approximately 24-hour day/night cycle that governs the biological processes of all life on Earth, including humans.) 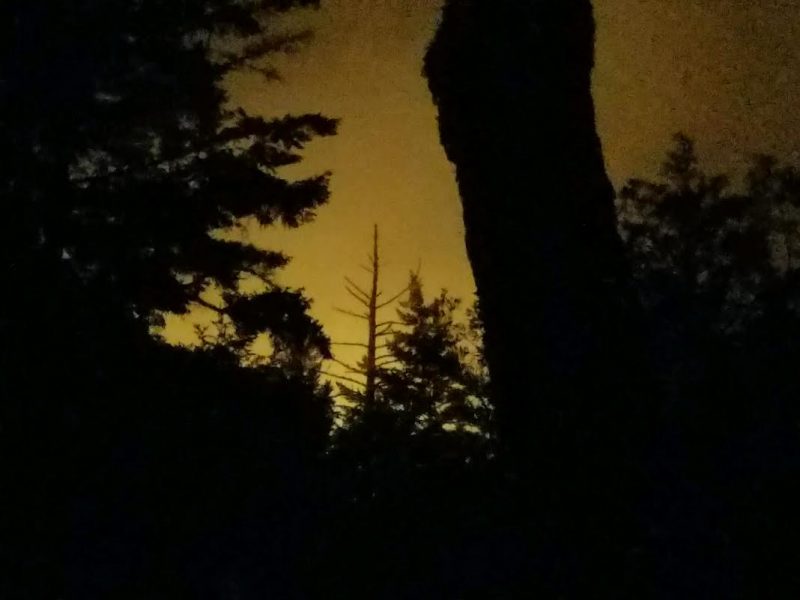 Light from a neighbor’s greenhouse obscures the night sky as seen through the window of one rural cabin. [Photo provided anonymously]

Given how rapid the changes are occurring in our communities amidst the continued growth of the cannabis industry, it is essential that we collectively act to prevent uncovered, illuminated greenhouses from becoming more widespread.Most scientific studies involving light pollution have focused on the light spectrums utilized in urban and suburban areas. It is important to consider that the impacts of artificial light at night in the Emerald Triangle region may be amplified by the intensity and spectrum of the grow lights being used as well as the ability of greenhouse fabrics to scatter light in all directions.. Current scientific studies may not reflect the severity of our local problem.

This photo was taken on May 27th, 2016, at 11pm looking N/NE from Elk Ridge towards Myer’s Flat. The ambient orange glow to the left is assumed to be Myer’s Flat and vicinity and possibly some cumulative light from the Weott area? The bright blue/white light on the right is from a single cannabis factory and appears to be meeting or exceeding the skyglow of Myer’s Flat. The bright blue/white light in dead center is one of the largest greenhouses to be viewed from Elk Ridge and some nights (depending on the cloud cover) dominates the northeastern night sky. It is estimated that this greenhouse is about 20 miles away from the photo point. All other nearby lights are uncovered greenhouses. [Photo by Melissa Walbridge ]

Artificial light that escapes into the surrounding night environment has the potential to create an unnatural stimulus that can affect the orientation, metabolism, reproduction, competition, and predation of both nocturnal and diurnal animals and insects.1,2,3,4,5,6,7,8,9 The spectrum of lights that are utilized to “trick” cannabis plants into growing at a different rhythm than existing natural cycles inside a greenhouse may have the ability to alter the growth cycles of plant communities in the surrounding areas outside a greenhouse.9 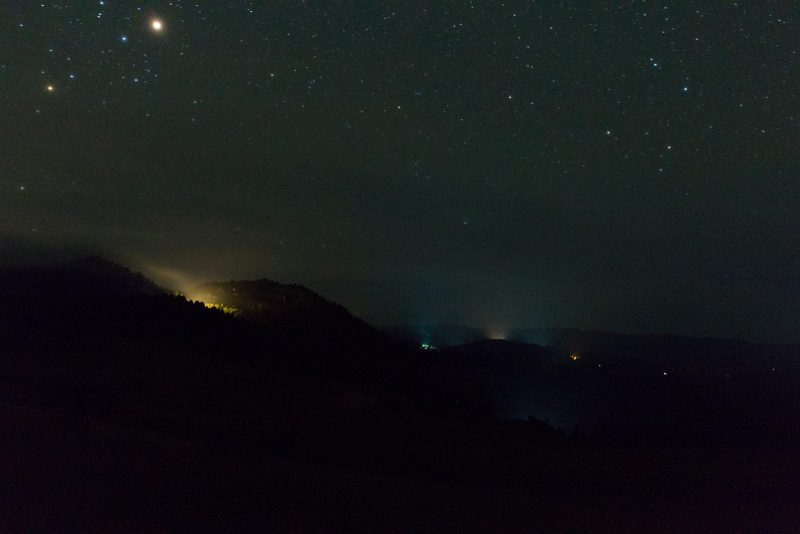 This photo was taken at 11:15 p.m., May 27th, 2016 from Elk Ridge looking due south. It is clear in this photo how the incursion of light from one factory can affect the day/night cycle of a large area. The greenhouses below in the valley shine like sports stadiums. Luckily, as summer solstice approaches many of the greenhouses shut down for a few months before starting up again in the fall. [Photo by Melissa Walbridge]

Light-assisted greenhouses have the capacity to affect an area much larger than the surrounding property depending on the size and number of the greenhouses, the type and intensity of the lights being used, the cloud cover present, and the topography of the area. Cloud cover can serve as an amplifier, increasing the effect of “sky glow,” as well as concentrating the dispersal of horizontal ambient light. A large cannabis factory (or multiple small factories) can illuminate areas of a watershed similarly to, or exceeding the light emissions radiating from a small town. Here is a site that allows us to view the light pollution for our area. Click on the “Bing Map (hybrid) overlays” and check the changes from 2010-2016. Most of the new light pollution sources for Southern Humboldt appear to be illuminated greenhouses.This site uses NOAA/EOG overlays to asses light pollution via satellite images from 2010 to 2016.  Below, in the top screenshot from the site, you can see light pollution radiating from our small towns as would be expected. (Keep in mind that the amount of light accessing the satellites changes given the cloud cover present.) Looking west from HWY 101 in 2010 there are no visual signs of light pollution. These were once some of our best dark skies for star viewing. In the lower image (2016) you can see several new sources of light pollution. By using the link to zoom in closer, one can see that most (if not all) of these appear to be light-assisted greenhouses. Some of which are emitting light intensities that are greater than adjacent towns. In this area, twenty to thirty “black-out” tarps could completely eliminate this problem overnight. 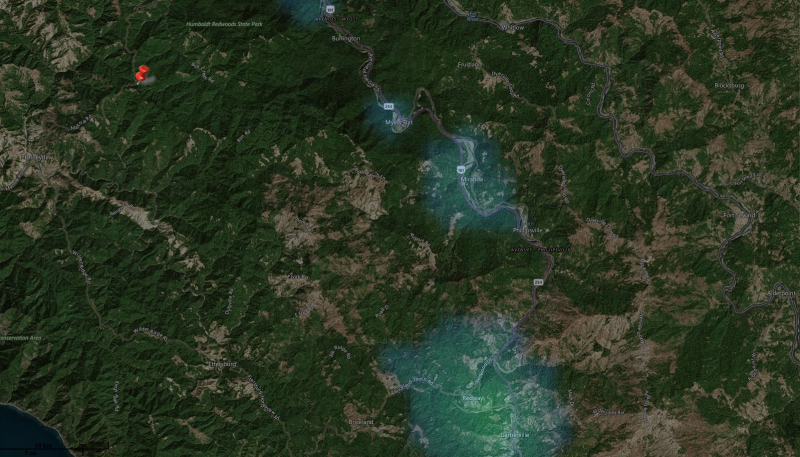 This screenshot from 2010 shows that the main source of light mostly came from towns. (Note: Though the site cautions that “[d]ata from 2010 and 2014/2015/2016 is not comparable” for our purposes a comparison between no light in an area and light in subsequent years is helpful.) 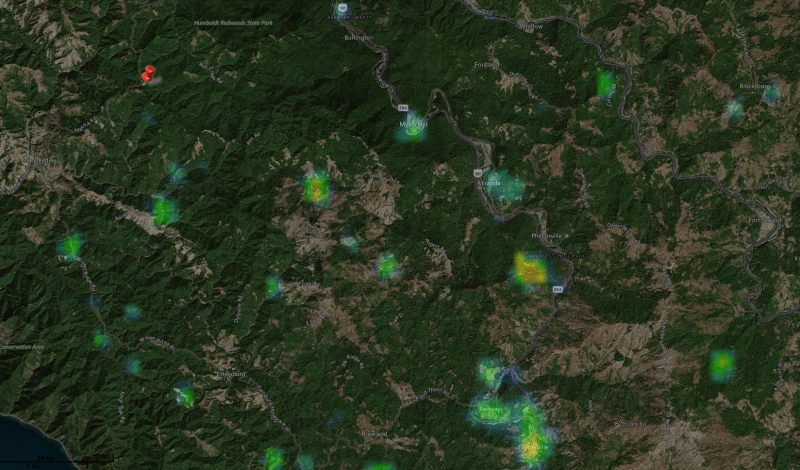 This screenshot from 2016 (from a composite created between March 1 and March 31) shows that a single greenhouse can give off more light than an entire small town. Notice the size of the light glow from Miranda and that of greenhouses in the area.

The energy required to sustain this new light-assisted greenhouse phenomenon has created another diesel fuel delivery boom in our watersheds. Thus, coupled with light pollution is the increased potential for diesel spills, carbon emissions, sound pollution, and the heightened risk of wildfires from generators.

Not so long ago it was in the best interest of a grower to be discreet. The current absence of discretion that allows commercial cannabis production to alter the nocturnal environment of communities is a glaring example of an industry whose scale has exceeded the capacity of state and local regulation and enforcement.

The new County Medical Marijuana Land Use Ordinance (CMMLUO) allows for up to ½ acre of mixed-light cannabis cultivation. If the county does not follow through with regulatory oversight and enforcement, our watersheds face further threats from this (and other) forms of environmental pollution. In the words of Second District Supervisor Estelle Fennel regarding uncovered greenhouses at night, “Every single one of these greenhouses is operating outside the CMMLUO.” What remains to be seen is if the county (and all of us together) care enough to no longer enable offenders who aim to maximize production and profits regardless of the cost to our shared environment.

Outlaw communities that have traditionally practiced an “oath of silence” by refusing to report environmental crimes have now become the fertile grounds for outside interests looking to parasitize these “safe havens” that have been created. It is becoming increasingly clear that the silence of the past has now left communities feeling disempowered and hopeless as recent complaints filed with local and state authorities regarding large-scale environmental degradation go unanswered. Have we reached the point of no-return where the power of our local mono-economy reigns over the health and safety of our communities?

Potential Solutions: The first and most obvious solution is for farmers to consider growing cannabis within the Earth’s natural daylight cycles. Is it not possible to compete in the market without the multiple harvests provided by mixed-light cultivation? Do growers really need to use this light-assisted technology to produce quality cannabis?

For cultivators that feel reliant on mixed-light production, the use of “black-out tarps” to keep light from escaping is undeniably the answer. Education on this part of the solution must become the moral imperative of our local garden supply stores. When the sales of grow lights are made, the slogan might be “If you’re going to light-it-up—cover-it-up.”

In preparing for a legal future, it is in the best interest of cannabis farmers to recognize the seriousness of these light pollution impacts and take action to form a public awareness campaign to educate growers. In this way, farmers and collectives can continue on the path to building trust with local and state agencies, environmental groups, local government, and community.

For those looking to find their niche market in the “Humboldt Artisans” arena, emphasis needs to be put on the value of growing within the Earth’s natural photoperiods.

This will require cannabis consumers to be educated on the difference between a product that embodies a large carbon footprint (indoor and mixed-light cannabis) compared to a low-impact product grown within the natural cycles of the sun. We need a “Slow-weed movement” if a future legal industry plans to truly walk the sustainable cannabis talk.

We can all contact our local supervisors and ask when the enforcement of the new “CMMLUO” guidelines is going to take place. Perhaps of most importance is to call or talk directly with our neighbors (new or old) and request that they cover their illuminated greenhouses at night.

Light pollution might seem like yet another inevitable loss as our watersheds succumb to industrialization imposed by the cannabis industry. But unlike many of the other forms of land degradation we are experiencing, this one has a simple solution and can be changed quickly with persistent education and vigilant public pressure. “If you’re going to light-it-up—cover-it-up.” 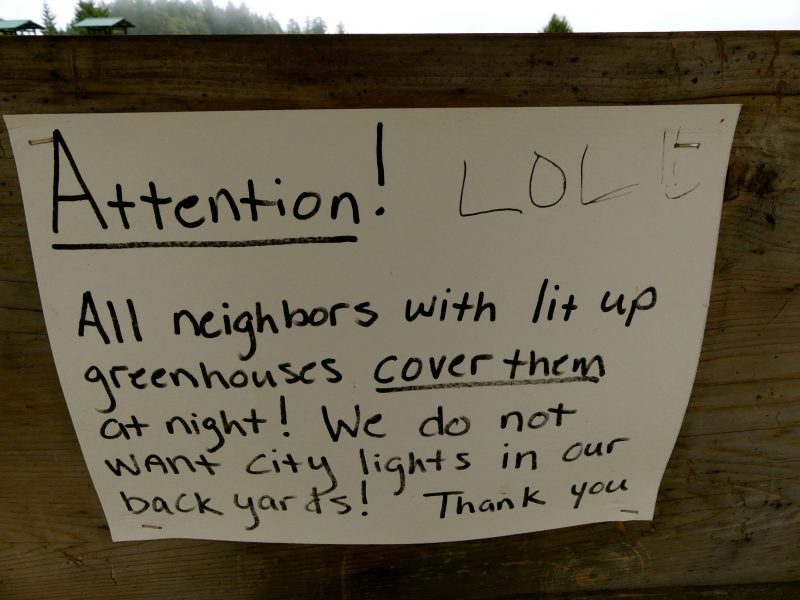