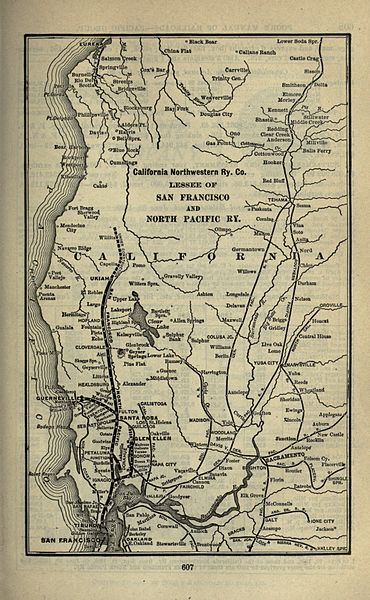 1901 map of the North Western Railroad tracks. [Image from Poor’s Manual of the Railroads of the United States]

The construction of the Northwestern Railroad up the Eel River canyon was a time consuming, massive endeavor employing thousands of workers to lay the track and bore the needed tunnels. The 1890’s and early 1900’s were a very good era for surveyors as numerous plans for railroad lines were reported in the news, and surveyors were out in force across Mendocino and Humboldt Counties. As early as 1894, surveying stakes were in the ground as far south as Phillipsville along the South Fork of the Eel River, though that route plan never came to fruition.

Supplying the construction sites and workers was a large task in itself. Warren A. Bechtel was the superintendent of the construction in the early days of his business empire, and was credited with the first use of the steam shovel to dig the bed for RR tracks.

Steam shovel at Island Mountain in 1915. [From Humboldt Room Photograph Collections at the HSU Library]

As we have previously reported, shipping supplies upstream on scows and barges was employed for awhile. Besides the better known Poison Oak and the Laurel, the Pepperwood Klipper plied the waters of the Eel River at a record setting pace…for slowness. Carrying heavy mill equipment upstream at an “astounding” one mile a day, the “Klipper” was pulled by a donkey engine and cable taken 1000 feet up the river and anchored.

Dynamite was an essential tool in the arsenal of the builders, and many tons of earth were simply blasted into the river. The comment section of that post has much more information about the damage to the Eel River done by building and maintaining the railroad over the years.

As we will see, the completion of the NWP track section south to Fort Seward heralded the end of the era of using river craft to supply the railroad builders. But first, this week’s Odd Old news takes a look at the logistics of moving dynamite to the railroad site, and how Eureka was spared being “blown off the map” when a shipment of 50 tons of dynamite was offloaded on the docks.

GASOLINE AND POWDER ARRIVE ON THE NORTHFORK
Twenty-five Tons of Explosive Shipped to Ft. Seward for Construction Work
Humboldt Times
5/16/1913
Fifty thousand pounds of blasting powder, enough to blow Eureka off the map, were yesterday morning shipped to the construction camp a few miles north of Fort Seward, it will be used in grading the right-of-way between Fort Seward and Island Mountain. The shipment consisted of 2000 cans, each containing 25 pounds of the powerful explosive. It arrived late Tuesday night on the steam schooner North Fork and the following morning was discharged at the warehouse of the Northwestern Pacific railway company. As there is an ordinance against that amount of explosive remaining in the city over a certain amount of time, it was loaded on freight cars late the same night and yesterday morning forwarded to its destination. The powder formed only a portion of the North Fork’s cargo. c Had a fire started on the North Fork, Captain John Nelson and his crew would have “mysteriously disappeared.” 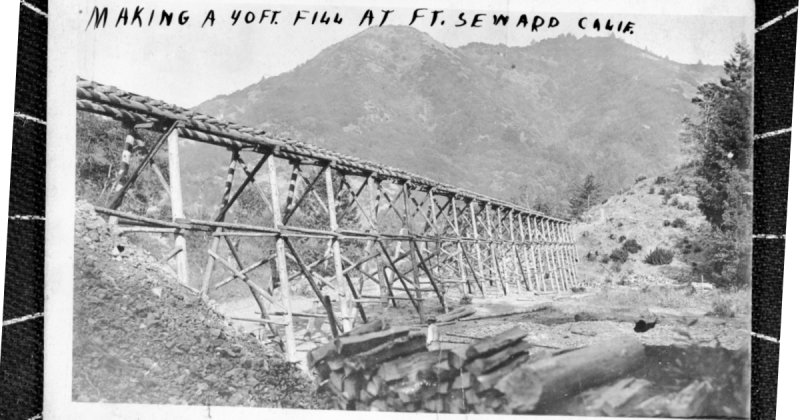 RAILROAD REPLACES OLD METHOD OF FREIGHTING FREIGHT
ROUTED TO SEWARD
Barges Which Cost Several Lives Are Abandoned When Rails Are Put Down
Humboldt Times
7/13/1913
Since the first of July the merchants of Eureka have had their trade territory considerably enlarged through the fact that the Northwestern Pacific railway since that date has been accepting freight consigned to McCann, the present passenger terminal of the road, located 5 1/2 miles south of South Fork. A still bigger addition to the trade territory was made the first of the week when the railway began accepting freight consigned to Fort Seward, 25 miles south of South Fork. Under present arrangements, the freight for McCann and Fort Seward is placed in the same car when loaded at the local warehouse. The car is taken to McCann by the regular freight train and the local freight there discharged, the car being then taken on through by the construction trains.
Enables Progress
While the routing of freight through to Fort Seward from this city means considerable to local merchants, its greatest value lies in the fact that the railway contractors are better enabled to get in their supplies. Large quantities of these supplies are being sent forward to A. C. McLean at Fort Seward and to W. A. Bechtel. Bechtel is superintendent for the Utah Construction company and in addition to having some 2000 men employed on the construction work south of Island Mountain, has recently established a camp on this end of the big tunnel and at Alderpoint. Owing to the June rains very little could be done on the work there, as it was impossible to haul in supplies, but now that the trains carry them to Fort Seward and the roads are open for freighting to Alderpoint, the work will go forward very rapidly until the fall rains set in.
R. R. Replaces Barges
Two years ago the railway contractors were hauling supplies up Eel river from Shively under the greatest difficulty. Boats pulled by horses were tried, barges built and even the scows “Poison Oak” and “Poison Ivy” were constructed at an enormous expense. After making one or two trips the effort was abandoned and the scows now lie nearly buried in the sand and gravel of the stream they tried to navigate and failed, as far as practicability is concerned. A number of men lost their lives in these efforts to conquer the Eel and haul in supplies to the railroad crews which were pushing the work forward.
Pack Mules Were Used
Later a wagon road was built along the south side of Eel river from Fort Seward down to near Dyerville. The load was blasted out along the bank and at intervals was built upon the gravel bars. Meat and supplies were hauled into the camps by wagon and pack mules from Fort Seward. Now all this is done away with and the remainder of the road will be built by men who obtain their camp supplies by rail from Eureka and Dos Rios. It is a far cry from the present times and conditions to those obtaining two years ago. Those not in close touch with the rapid progress being made can hardly realize that freight ran now be shipped to Fort Seward from Eureka.

There are many, but here are the most recent: