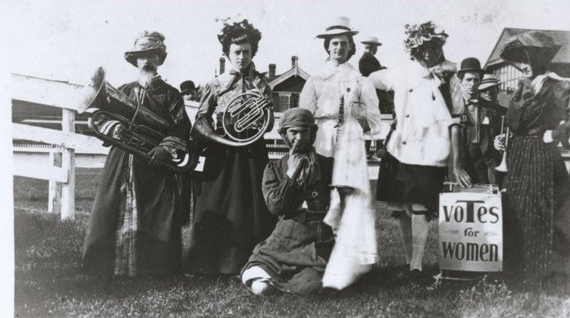 “—Ancient and Horrible order of CALATHUMPIANS! will parade where they please and do as they like, then march to Centennial Hall and observe their peculiar ceremonies.” —Humboldt Times, 7/3/1886

Many may still be in mourning from the cancellation of this year’s iconic Humboldt Bay Kinetic Sculpture Race. Odd Old News takes a look at some 19th and early 20th century parade entertainers who were predecessors of the Kinetic Sculpture Racers in eclectic spirit, if not form of expression. The word calathumpian is from the Latin “calathus” (rubbish bin), and has sometimes been used to disparage those whose beliefs belong in the rubbish. To parade goers of yore it had a very different meaning. Calathumpians were a highly entertaining cross between men’s societies and clowns who would show up at the end of parades “in queer and grotesque costumes”…with a reckless disregard of the beautiful.”

4th of July celebrations have historically been large events with a full day’s schedule of contests, parades, Patriotic speeches, prayer, dances and music. But for fun entertainment, nothing surpassed the appearances of the “Calathumpians, a Motley Crew of Comus. Such fantastic costumes; such fanciful equipages; and unearthly music from such uncouth instruments; such sorry Rozinautes of steeds—both horses and mules; such queer mugs of pasteboard faces, and such a joust at barrel hoop ; such fun, and frolic, and jollity, we have seldom seen”.(Russian River Flag, 5/22/1879).

They were known to perform funny stunts, and sometimes played cacophonous instruments such as the “horse fiddle, two bows made of hoops, stringed and rosined with a beef bladder, inflated and pushed between the string and bow”; the ‘great trombone’–a dry-goods box turned upside down and played upon with a long scantling propelled by two men in a sawing motion, and the ‘gyastacutas’ —a nail-keg with a raw hide stretched over the opening like a drumhead with a string hung from the centre of the drumhead that was worked by pulling in the string and releasing it. “The infernal regions could not equal it.”

However, the Calathumpians were not the only men’s society to celebrate the 4th of July in the Humboldt Bay area in 1878 as the local papers forewarned:

“The Calathumpians of this city, the Snolliegasters of Ferndale and the Double Tooth Greeks of Rohnerville are preparing to celebrate the Fourth after their own unique styles. No doubt the Snolleys and Double Toothers expect to eclipse the Thumpys, but we guess not. The latter will not only make a magnificent display themselves but will be assisted by several outside delegations. The Outcasts of Poker Flat, Exiles from Poverty Ridge, Fugitives from Last Chance Gulch, and the entire body of honest Miners from Eel River have signified their intention of parading with the Calathumpians. This ensures victory for our boys. Greek may meet Greek and Snolleygaster grapple with Snolleygaster, but the real tug of war will be right here in Eureka. You hear us!”(Democratic Standard, 6/28/1878).

Another version was captured here:

The Modern and Unimproved Order of the Ferndale Snolleygasters order of business on the 4th included: A Tin Horn solo by the band, the Pounding of the Hoodad, the Proclamation of Unsophisticated Principles, a Bass Drum solo by a gentleman from Picatoo Island, an Evolution of Antics speech, a reading of the poem “Exquisite Thoughts” by an unexpected Snolleygaster, followed by the Grand March of Tibee, and a Grand Walk-around. (Humboldt Times, 7/2/1878)

Eureka’s 4th of July celebration did not disappoint, and the Calathumpians were likely not outdone for roisterous, rumbustious fun, sartorial splendor, and customary abstruseness.

July 5, 1878THE CALATHUMPIANS.—Pursuant to notice the Ancient and Honorable Order of Calathumpians gave the outside world a glimpse of their inner mysteries on Thursday last. The procession formed at 2 p.m. the vanguard of the cortege was led by Gog, Magog and Memphramagog.

Old Memphry seemed to have the best of it as far as gorgeousness of apparel was concerned. He was elegantly attired in a close fitting suit of red flannel, cut bias on the selvages and gored in the upper seams; at least it seems to us that it was thus. Following these striking figures—and Gog struck at everything and everybody he could with a stuffed club—came the Fair Maid of Perth and the Chief Mourner. The bystanders could plainly see the cause of his grief whenever he looked at the closed door of the saloons. For the proprietors made haste to shut up whenever he came in sight.

The Outcasts of Poker Flat and Refugees from Last Chance followed, while the rear of the procession embraced the Rag, Tag, and Bobtail of Hungry Gulch, and the Scot, Lot and Pot Wallopers of Simpson’s Divide—although what they had to divide would be hard to imagine.

The United Order of Vulgar Little boys acted as an escort, while the police and large body of special constables took care of what property was laying around loose on the sidewalks. The Antique exercises of this venerable body were held at Centennial Hall. They were sent there by the Mayor to get rid of them.

The Grand Panjandrum made a speech, of which the following is a brief abstract: Fellow Cathumps, (“Who do you call feller?”—from a red nosed Outcast from Poker Flat.) We meet (“yes” said a Hungry Gulcher, “yes, mutton, I suppose”) We meet, said the speaker, “to denounce tyranny in every form, whether it be the tyranny of a German Emperor—(“You had just petter look a leedle oud how make foolishnesss mit der Kaiser, don’t it?”) said a Teutonic member of the Order, for which G.P. called him to order, pending which our reporter adjourned. The remaining ceremonies were too abstruse for his comprehension.

Comus: “In Greek mythology, Comus (Ancient Greek: Κῶμος) is the god of festivity, revels and nocturnal dalliances. He is a son and a cup-bearer of the god Dionysus. Comus <a/) represents anarchy and chaos.”

🕯🌳That was pretty good David it kind of goes along with the times, and thank you Kym for sharing. 🐸🌍🖖

The Calathumpian’s must have been very effective in their protest for women’s suffrage. Women won the right to vote in 1920, five years later. Who’da thought…

Strange that I have never heard of these groups. I wonder if women were allowed to participate?

Thank you David for another tid-bit of our history.

No wonder hippies were attracted to Humboldt county! Re-unite modern day Calathumpians!! I think it’s possible to be safe&smart(Corona), and still have some rollicking silliness.

Ernie Branscomb
Reply to  For sure

After a little research I discovered that there are calathumpians all over the world. There is even a calathumpians religion in Austrailia.
One definition of “calathumpians” is ‘the beginnings of a religious sect’.

We are in the Age of Calathumpian after which there is no accounting for history at all. We make up history as we go along.

BCE and CE were introduced to avoid the common mistake you include in your post. AD has never referred to ‘After Death’, but instead abbreviates the Latin ‘Anno Domini’ (aka ‘The Year of Our Lord’). It’d be pretty silly to use BC and AD as you present, ignoring the 33-year gap in between.

Here is a photo I inherited of Calathumpians celebrating 4th of July in Crescent City, about 1907. The man in the top hat standing 3rd from left is my grandfather, George T. Berry, Sr., and he was portraying Uncle Sam. I have a newspaper article he wrote in 1954 in which he describes 4th of July celebrations there at the beginning of the 20th Century, including the Calathumpians or “horribles” and their antics.

That is so cool! Thank you.