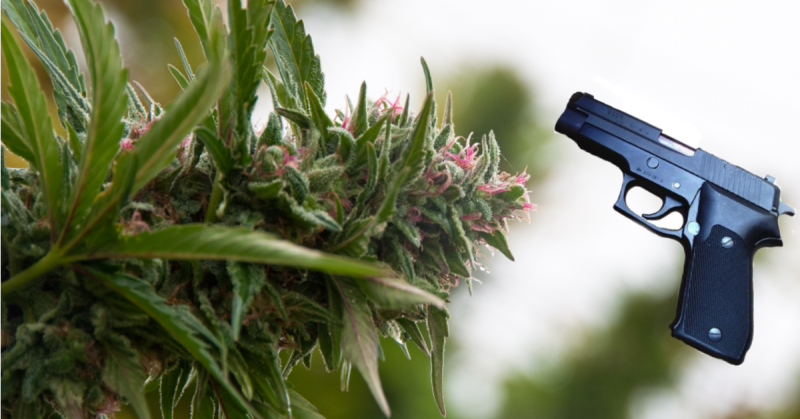 Cannabis farmers in northeastern Humboldt believe that a well organized and heavily armed criminal gang is targeting them and may have done so for years.

The Humboldt County Sheriff’s Office has begun placing a team in the area in order to respond quickly to criminal activity, a lieutenant told us.

Many of the robberies went unreported, one farmer told us. However, law enforcement has been notified about a few that farmers believe may have been the victims of the gang. (One robbery in 2017 that was reported and identified by multiple people as likely to have been committed by the gang is here.)

Several growers tell us they believe a property in northeastern Humboldt that has been violently robbed twice in the last month is a victim of the gang.

Chris Martin, the manager of Old Goat Farms, told us the permitted cannabis grow he manages on French Camp Road northwest of Hoopa was initially invaded by armed robbers on October 10 and then more recently on Halloween Day.

“They came at seven in the morning,” said Martin who was at the property when it was robbed the first time. “The generator got shut off, so, thinking we were out of gas, I ran out of the house to [find] six people with guns.”

Almost all of them wore some form of face covering, he told us.

One of the first things, the robbers did was make it difficult for him to see any identifying characteristics on them. “They took my glasses and broke them,” he said. He explained if he looked in one of their directions, they would act menacing so he tried to avoid anything that might make them angry.

He added that the armed robbers made everyone lay on the ground. When they told everyone to get down, Martin said he thought, “Dying is not worth the weed.” He explained that he believed that the men were “not here to hurt us; they are just here for the weed.” He decided to cooperate to make sure no one was injured.

“At gunpoint, they made us take off all of our clothes,” he explained. Then, he said, “They made us clear out the place. They didn’t want to do any work.” Without even the protection of their clothes, he told us, the robbers forced the victims to load a number of vehicles, including two that belonged on the property, with stolen cannabis and other items.

An odd juxtaposition with the violence of having guns pointed at them while they were forced to do work unclothed was the encouraging words of the young armed robber who had a gun trained on him a good part of the time. “He was the only one that didn’t have a mask on,” Martin told us. “He was so young, he had peach fuzz…While we loaded all the trucks and everything, he kept saying things like ‘Hey, man, you are doing a good job.'”

Martin marveled, “He’s cheering me on while he has a gun on me!”

But without his glasses and with the menacing response to any attempts to look at his captors, Martin said he doesn’t really have any descriptions. “I spent four hours with the guy and I couldn’t tell you what he looked like,” he explained.

Between the robbers with guns and those driving away with stolen items, Martin believes there were a large number of individuals involved. “There had to be at least 15 people,” he said. “There were six people with guns that were crowd control. They were older by the sound of their voice…and then that young kid.” Then there were more than those though, he told us.

The robbers took not only the vehicles, but firearms and other items of value and what Martin described as about half of all the cannabis on the farm. (Some hadn’t yet been harvested.)

One of the two vehicles taken was later found abandoned in a waterway. But another, a bright blue 2001 Dodge Ram 2500 with a white tailgate, is still missing.

As disturbing as the first robbery was, the second robbery–early Halloween morning–was much more violent. Martin wasn’t there but he spoke to people who were and he is intimately involved in the farm’s operations. Below is his account of what happened. In some aspects it conflicts with earlier accounts. Please be aware that this is his account and while we believe it to be accurate, we have only been able to corroborate parts.

Martin said the farm had hired Omni Security Services. Early on Halloween morning, the armed guard was in a fifth wheeler with two of the owners of the property, there were a group of people in the home, and a third group of people in a cabin. Martin was away for the night.

Even though the initial robbery had made everyone nervous, the Farm had decided to hire security and finish the harvest. “The first time [the robbers] never touched us,” Martin explained. “And the other half of the farm was still standing…This year could not be a complete loss. Everyone involved decided to finish.”

“We were like 90% done [with harvest],” Martin told us. “Everything was into totes.”

A little after midnight on Halloween, a number of armed robbers (a smaller group than the initial robbery) broke into the main house.  “They came straight to the bedroom where everyone was at,” he said he was told. “They tried tying the workers up to a pole…They were so messed up on drugs that their hands shaking so badly that they couldn’t tie anyone up. So they locked them into a container…When they were locking people in the container, they asked them if there was anyone else here.”

After being told there were people in the trailer, the robbers went there next, Martin said. Besides the security guard who was on a break from patrol, Martin described there being “two older gentlemen”–one about 70 years old.

The robbers started banging on the door and “yelling to come out,” Martin said. “And then from what one of the owners told me, [the robbers] had shotguns and were just shooting into the trailer…After they started shooting, that’s when security guard started [firing back].”

The robbers then upped the level of violence even further, Martin claimed. “They threw like an incendiary device,” he said. “They were prepared! Who has one of those in their back pocket?”

He paused and added, “Setting shit on fire especially right now…Fire is a scary thing right now. They could have set the whole rez on fire. There is no care for life. No care for community. There’s nothing.”

At this point one of the owners fled the building. “The older gentleman jumped through a closed plate glass door and landed at the feet of the robbers but managed to run up…to the top of the hill to the cabin where the workers lived.” These workers had just woken up, Martin explained. “They were just watching  everything unfold.”

At least one of the workers had a cell phone that the owner used to call law enforcement for help. A scratchy transmission of the beginning of the dispatcher sending law enforcement can be heard below. (Note: 1144 means deceased.)

Martin said that law enforcement and fire engines arrived in the remote area remarkably quickly. The trailer, the security guard’s car, and a rental car were badly damaged in the fire.

According to Lt. Mike Fridley, the reason the Humboldt County Sheriff’s deputies were able to get to the incident so quickly was because they had a team aleady in the area to be ready in case of another robbery. “We had complaints and we are taking this seriously,” he told us.

In an earlier interview, Lt. Greg Musson of the Humboldt County Sheriff’s Office told us, ““Nobody was shot that we know…All the good guys and gals were accounted for. We don’t know if any bad guys were hurt.”

Although Musson said that as far as he knew, no drones were involved, other farmers in the area have told us off the record that multiple drones have been seen flying over private property as well as men wearing tactical gear scoping out trails. “I don’t know where they are getting all their tactical gear,” one told us. “Some of what we [saw] is stuff you could only get if you were law enforcement.”

Martin said that one of the phones taken in the robbery was traced to seven or eight totes of the stolen marijuana by the Sheriff’s Department. He wasn’t clear on how that happened but he said that it was wonderful to get even that amount returned. “[Law enforcement] brought it back,” Martin said in amazement. “I was kind of like ‘Wow! We had a really bad day but this is cool.'”

But he said he also felt like the deputy who returned it was unhappy. “I thought he felt he was wasting his time,” Martin explained. “He could have been helping society, but instead he was bringing back dope to dope growers.”

He added, “I get it…The pot growers have been fighting the police for a long time and now [we] are asking for help. But we are paying taxes. I’m not asking for [law enforcement] to sit on the property and patrol but [the robbers] tried to kill people…You play by the rules; you expect to be under the umbrella.”

Martin and other growers we spoke to feel that there is an armed and organized gang operating in the area.

One grower said that he believes the group has been operating for at least four years. That grower said, “This thing is much bigger than a couple of ripoffs. It warrants an FBI investigation done.”

Martin agrees that the situation in the area is dire. He said it is just a matter of time before someone is killed or badly injured. “It’s real. [the robbers] are not messing around,” he said.

Note: the initial story has been updated with information from the Humboldt County Sheriff’s Office’s Lt. Mike Fridley.