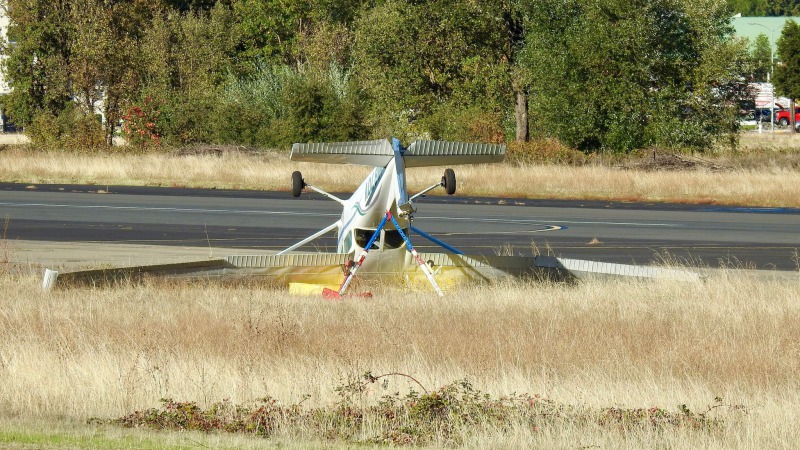 The City of Ukiah in a statement released this evening has confirmed that single-engine aircraft that crashed today at the Ukiah Municipal Airport resulted in the death of the pilot.

The Ukiah Police Department, the National Transportation Safety Board, and the Federal Aviation Administration are currently investigating the crash. 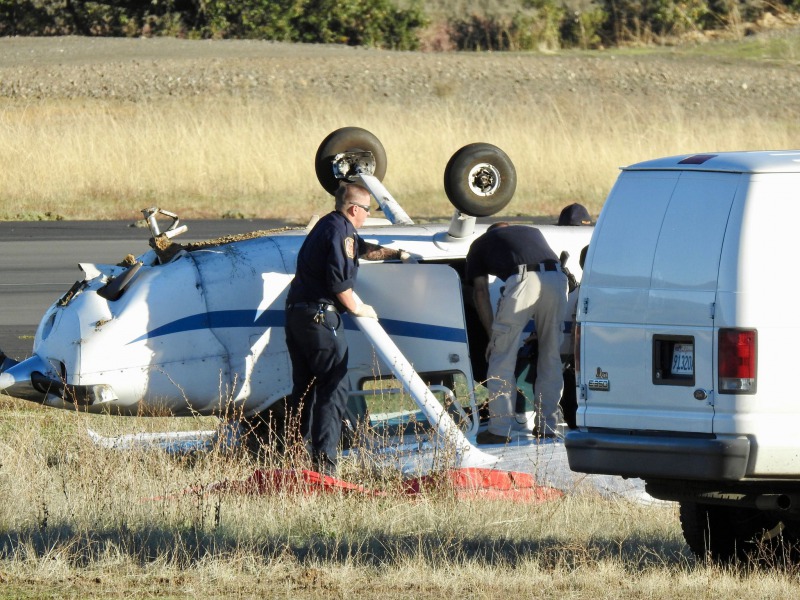 A Ukiah resident who lives near the Ukiah Municipal Airport told us around 1:00 p.m. the plane was taking off and was going nearly take-off speeds when the crash occurred.

The flight plan as documented by FlightRadar24.com shows that the plane was landing rather than taking off as the eyewitness believed. 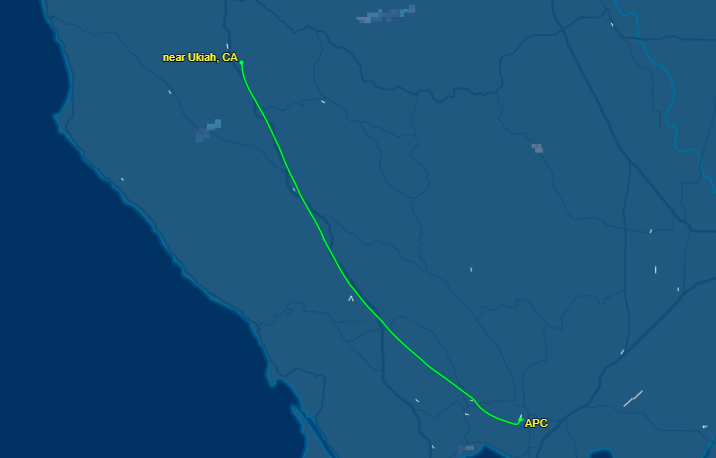 This screenshot from FlightRadar shows the flightpath of the plane today from Napa to Ukiah.

The eyewitness went on to say that the plane was on the runway when some sort of malfunction took place. One of the tires associated with the landing gear reportedly broke off the craft which “caused the plane to flip,” the eyewitness said

It’s worth noting that the landing gear underneath the plane’s nose is visually damaged in photographs taken of the scene. Also, where there should be a tire, there is none. 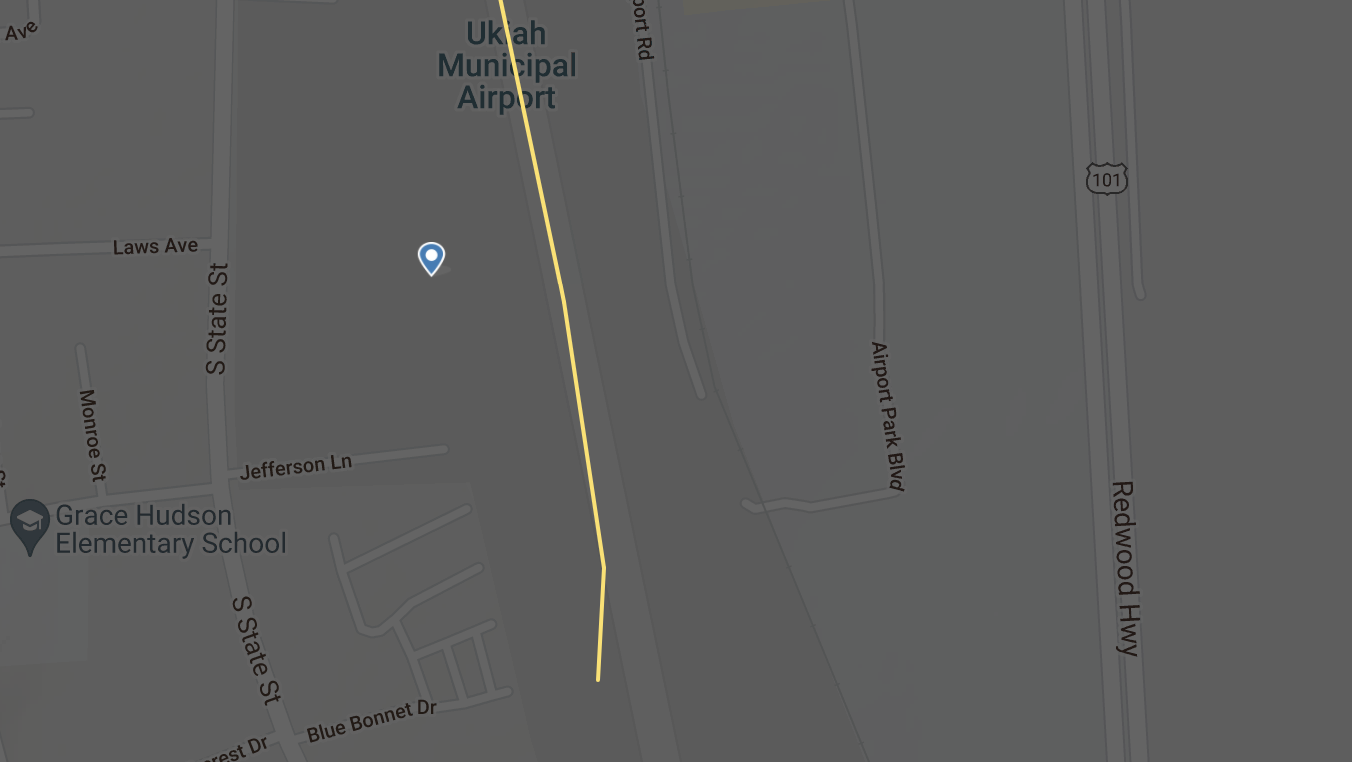 This screenshot from FlightRadar24.com shows a sharp turn off of the Ukiah Municipal Airport runway.

The plane’s path deviated as a result of the malfunction and it veered off the runway and struck a patch of earth. The eyewitness described the plane flipping over when it struck dirt. Nearby residents climbed the airport’s perimeter fence in hopes of assisting the pilot but said the pilot appeared deceased by the time they got there. 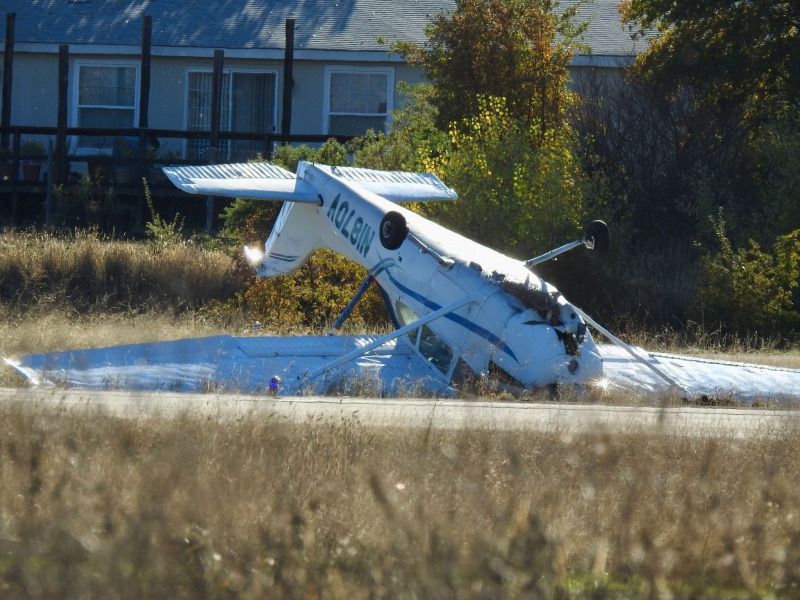 The landing gear appears to be damaged. [Photo by Matt LaFever]

The plane originated from Napa Valley, as per flight records documented by FlightRadar24.com, and its make and model is a Cessna 172 M Skyhawk.

The plane’s tail number 1870V is associated with a flight school in Napa County called Mike Smith Aviation. We spoke with Mike Smith himself who confirmed that one of his planes was the craft that crashed today. He said NTSB is actively investigating and could not comment further at this time.

Praying for the family, I’m so sorry for your devastating loss and pain 💔

Based on the ADS-B data, it looks like the pilot made the approach at a rather high speed. The aircraft was traveling 90-100 knots throughout the approach and never really slowed (ADS-B data is, of course, indicating ground speed, not air speed, but this is still potentially significant). Whether this was due to an inexperienced student pilot or other cause (or causes), I won’t speculate, but it is odd. Nose gear failures have occurred in Cessna 172s in fast, porpoising landings, though it doesn’t seem terribly common. I’m quite surprised that this was fatal. The impact does not appear terribly significant.

The neck gets whipped around pretty bad in a “high side” or frontal flip like that. Very sad.

Yes, very sad 😞 a Basilar fracture I believe it called.

Agreed. My first thought upon seeing the photo was that I was quite surprised this was fatal.

A porpoise or just a really hard nose wheel first landing is certainly a possibility. Although it could be something as simple as a blown tire, or even just a crosswind, that caused the plane to veer off the runway and then the nose gear collapsed once he hit the dirt on the edge of the runway. None of those scenarios are particularly uncommon, but having it lead to a fatality is quite uncommon. So sad.

Oh, BTW saying the landing gear “malfunctioned” is probably not quite accurate. This is a fixed gear airplane, so there really isn’t much to “malfunction.” That term usually refers to a retractable gear aircraft that has issues getting the gear back down and locked.

Equipment malfunction is not limited to active systems only.

If the structure of the landing gear failed it’s eq.malfunction.

What failed?
Attachment stays at the body?
Gear framework?
Hardware?
Bearings?
Wheel?
Tire?
All are equipment that may malfunction.

Easterly crosswinds are very uncommon here when prevailing winds are not Diablo adjacent off shore flows.

Just because something failed does not mean it is a malfunction. That is not the way that term is used in the aviation world. If the nose gear strut failed because the pilot hit the ground too hard, that is not a malfunction, the stresses simply exceeded its design strength. In the aviation world a “malfunction” refers to an active system. A problem with a static system is simply referred to as a failure.

Very sorry for the pilot and friends and family. OK, I get your point (he said through gritted teeth). The front wheel assembly could have met full structural specs, but collapsed under a too-hard landing. Thus, it wouldn’t “fail” if it was not designed for the stress incurred. Also possible that a sudden medical crisis affected the pilot at a bad time.

Flaps in up position and sightings of being hot on final. It appears he buried the nosewheel. Possibly a medical situation where he lost focus. I’ll wait for the NTSB report for the final word. That said, I always get that empty feeling when something like this occurs. R.I.P.

The ADS-B read out showing a ground speed of 90-100 knots is not a surprise to me. My first thought when I saw the report of the flip over, was the pilot was too fast on approach. If the investigation shows that was the fault of it, you have to ask why was he landing so fast. I flight instructed many years ago and that was one of on going problems in teaching a student to pay attention to their approach speed. Another item I read in a lot of these accidents is the loss of directional control on landing and find they don’t seem to realize the rudders are for that not the control wheel.

I’m not sure where you’re getting this. ADSB track shows 65 knots over the threshold, which is given calm wind is right about on the money.

I read in another article that an eye witness has observed the plane doing “touch and go’s”. Could that have been why it was going so fast?

Thank you everyone, for saying all those kind things, he was my uncle.

My sincere condolences for your loss. Always sad to lose a brother in the sky. I hope you can take some solace in the fact he went out doing something he loved and something very few people in this world get the joy of experiencing. Was your uncle a new pilot or was he experienced?

He was just getting his license yesterday. That was for the test.

Oh man, I’m so sorry!
You mean he was flying to Ukiah to meet with the Designated Examiner to do his checkride?

Oh God. This was my husband. Please report anything you know or saw so we can figure out what happened. He was so competent at everything he ever did.

My deep condolences for your shocking loss. We in the pilot community feel the loss as well.

Mrs. Parsons,
Our thoughts, prayers and condolences are with you and your family during this time.
Sincerely,
Members of the Travis Aero Club.

I am so sorry for your loss this is a true tragedy. Since you’re asking for information, I saw a post on Facebook from an eye witness stating that the pilot had been doing “touch and goes”. The writer noted that pilot appeared to be skilled and in control of the plane. The only reason I mention this is because I haven’t seen it stated in any other published articles. I hope this helps. Prayers for you and your family.

So Guys, i just figured out that one of our family friend’s husband died in a gear failure crash like this there in ukiah on thursday. its so sad . EMail me if you got questions.