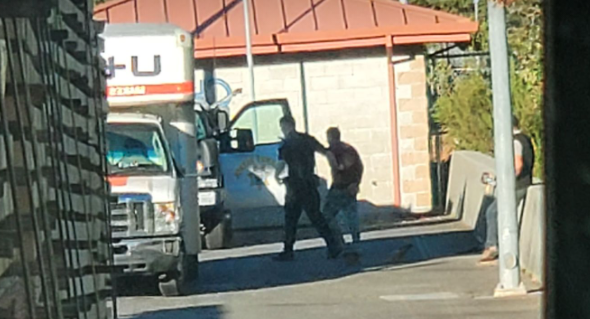 Man detained at the Ridgewood Summit scales near Willits this morning. [Photo provided by a reader]

At approximately 10:05 this morning Marco Antonio Ochoa Sanchez, out of Stockton, California, was arrested at the California Highway Patrol Scales located at Mendocino County’s Ridgewood Summit off Hwy 101 for transportation of cannabis.

CHP Public Information Officer Olegario Marin told us Sanchez failed to enter the scales and was pulled over immediately afterward. Officer Marin explained that “all commercial trucks have to pull into a scale facility including U-Hauls.”

Marin said responding officers inspected the U-Haul and found Sanchez to be in possession of a large quantity of marijuana in the cargo area of the U-Haul truck. Officer Marin said Sanchez did not have the proper documentation to indicate the marijuana was part of the legal cannabis market.

Marin said Sanchez was booked into the Mendocino County jail where he faces charges associated with the possession and transportation of marijuana and conspiracy.

Hmm… I was kinda amazed to see that scale open, it is usually closed most of the time.
Wonder if they er… knew he was coming.

Since when are Uhauls required to stop at the Scales on Ridgewood Summit, seems like an illegal pullover or that he was pulled over for a different reason. Racial Profiling is alive and well at Harvest time in Nor Cal.

NO , you are mistaken.. you ARE a racist!

You’re not racist dude. You are just ignorant as anybody can be about economy, history and the real world. Grow up and get educated.

Bozo – I was thinking along the lines that I hardly Ever see RattleSnake Summit weigh station open either. Wonder what else they might hope to catch?
Or if some admin type decided, Oh, Highway 101? – maybe we can catch some action there if we actually put it to use.

The CHP doesn’t have resources to staff the inspections at every scales every day, so they move around. A truck driver keeps their shit together assuming a scale will be open along their route. You either get a fix it ticket or a sticker that indicates the last month you got checked out. A few high traffic spots like on 80, and 880 by SanJose are open all the time. I’ve been pulled over and inspected by a TruckerFucker away from scales as well, so it seems like a uhaul could get the treatment anywhere, anytime!

Do uhauls always have to stop at scales? I’ve driven uhauls and have never stopped at one. Clear from LA to Eureka.

Yup.. supposed to. All commercial vehicles

🕯🌳Damn I told them to go east not south, idiot’s.

Watch out everybody they’re really poking around a lot. Saw three other people pulled over today in the 101 Willits corridor. By Fish and Game at one of em. Vehicles open, contents shifted about, folks out of the car.2 trucks. 1 car. Anybody waiting on a call, a visitor or box thats overdue. Heads up.

Guest
In my 1911 I trust
Reply to  Mendocino Mamma

Ah Laytonville through Ukiah, the good ol gauntlet, drug profiling at its best.

Guest
Use a different mule
Reply to  Mendocino Mamma

Well duh. It’s drying and packaging time. The earlier ones are moving product. But its the brainless wonders that haul…in U-hauls, the most obvious rig to haul weed with. Fault the guy for being too obvious and skipping the scales when they were open, which more often are closed. But he decided that $2000 was worth the risk so there he goes…

Mendocino County and the State are both broke, pulling over uhauls for not stopping at scales is not routine! Hopefully Kym can get some more information, Is this cause and legal reason to pull over Kym?

I spoke to a trucker and he assured me that it is the law for U-hauls to pull over at the scales.

Any trailer that can gross over 10000 lbs that is not considered recreational requires a class A.

Not any vehicle over 10k. Pickups, motorhomes, and ag vehicles, are exempt.

Ag has to follow all weight laws , only exempt on some hours of service. Your right about recreational vehicles, but pickups used for business that can gross over 10000 lbs are required to pay weight fees and pass through scales, but most don’t .

Sorta, not quite!
Class B is 26,000 or over, straight truck no trailer. Class A if you add a trailer, or if your truck is a tractor trailer combo exclusively, even under 10,000 GVWR trailer. 10,000 or over you need to piss test now with a commercial license. There are alot of cool guys out there pulling big heavy trailers with pick ups and class Cs. Its probably up to CHP if they want to tell you about it! And: you dont pay at the scales. Ones fees associated with the weight class of your vehicle are paid with registration to DMV.

Guest
Smile Under Your Mask

Interesting they are targeting the product moving South rather than the easily obtainable cash that is flowing North for purchases. Anybody notice the fancy jets flying in and out of Ukiah Airport. Investors from out of State are collecting their returns. Great time of year, everybody has some extra cash and a smile under their mask.

Guest
Thesteve4761
Reply to  Smile Under Your Mask

How are they supposed to confiscate the cash? Having cash and a plane are still legal, right?

Also, the garbage bag thing is funny. As well as the idea your gonna drive down the 101 with a U-Haul full of weed.

Busted at the scales but no weight, lol.

Lets not forget that Mendocino is a County Guilty of Genocide that was organized by the citizens in the 1850’s, Mendocinos History is dark and murderous and not just. In the 1930’s County agents were harassing , busting and murdering its own citizens for making wine, Catholic Italians were targeted as being Mobsters, The County Government which has continued to this day has been founded built and is still ruled in secrecy with secret handshakes and under the table contracts and bids. The entire County Government should be disbanded, all monies taken away and the entire County Government restructured with entirely different people in charge. MENDOCINO COUNTY GOVERNMENT is corrupt to its core

All those words and none of them relevant to the article.

The county govt should be “disbanded,” hmm?

Is that your studied opinion, professor?

Wow! You went totally off on another track…weird

I was uncertain what they meant, too.

Guest
Sonoma laughs at you
Reply to  Mendo Historian

Not any more corrupt as some of the citizens that have called it home. Do you really want country justice to prevail, full of people with no disregard for any laws? Your whole county would be reduced to rubble and ashes.

If you drive a uhaul truck past the scales you are more than likely going to get pulled over – drive through the scales, most likely not.

Unless your van stinks like Cheech and chongs from up in smoke. Fukt either way.

I saw a U-Haul pulled over by multiple CHP on the 299 last Sunday Oct 11 around 4pm just a few miles west of Wilow Creek with the rear door open full of black and yellow Costco totes. Any news of that one?

U Hauls are tough to find in Ca these days, at first glance of this article I thought they were being arrested for moving out of this trash state!

“any truck with a modified bed” such as a flat bed,dump bed, or utility (tool box) bed is also required. to stop….this includes smaller trucks under 10k gvw with modified beds like Toyotas or Nissans etc… typically they don’t pay much attention to those types of vehicles. Anything over 10k gvw requires CA or motor carrier numbers and the associated tag from the state also. I know this to be a fact as I own a 10k gvw pickup with a dump bed and have owned a number of flatbeds as well in the last 30 years. I also live near a CHP scale so I have to pay attention too see if they are open. Its true they don’t seem to pay much attention to rental moving trucks most of the time but each CHP commercial truck officer has a different perspective

U haul U dont haul weed in them. Simple.

Only commercial have to stop. If its personal belongings you dont. But doesn’t mean that cant pull you over and do whatever they want. Cops do not decide the law. So…. if you dont stop.. they give you a ticket… will you have to pay ticket…. No. Because you are NOT driving a commercial vehicle and the ticket will be waived as long as you dont have other crime going on… it’s like being arrested for resisting arrest…. just find a new way to break the law.

If your hauling a trailer do you have to stop? I always blow by them but I always see people pulled in to weigh aswell, with trailer(pickup with trailer not T&T)..

Thank you to all that made the day so very special for many ...

Just glad that no one was seriously injured or killed in tha...

Vehicle vs. Pedestrian in Eureka

Wow, this just seems to be happening on a fairly regular bas...

Velocity Communications Customers Without Internet Due to AT&T Equipment Failure

Starlink works great as long as you can locate the dish wher...