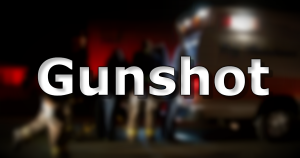 At 9:43 p.m., a male reported that his friend was shot with a .22 in the 3800 block of H Street in Eureka, according to a dispatcher speaking over the scanner. The victim reportedly has a gunshot wound to the abdomen.

The incident is far south of the protest and at this time appears to be unrelated.

An ambulance was dispatched and asked to stage outside the area until law enforcement had cleared the area.

There is at least one juvenile at the scene guiding officers to the victim, according to a report from the scene at 9:51 p.m. Medical was told to leave the staging area and head to the incident.

UPDATE 9:54 p.m.: An officer requested that the detained juveniles be checked for a .22 pistol. The shooting, he said over the scanner, is accidental.

UPDATE 10 p.m.: The officers were searching for the weapon. They were told to look under the bed. An officer reported soon afterwards that the weapon had been located.