Kathy Shoopman is one of the four victims who died in the first few days of the McKinney Fire. 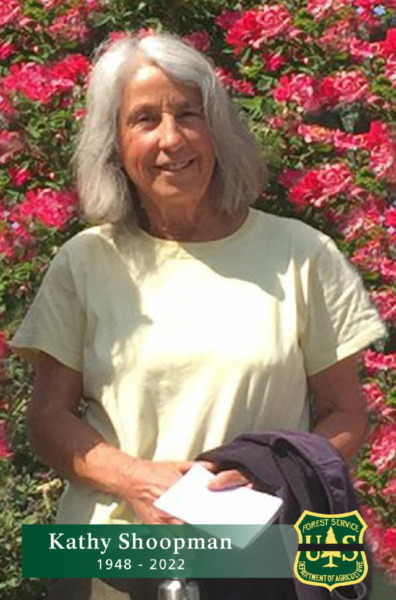 It is with great sadness that we must announce that the Klamath National Forest has lost one of its own. Beloved long-time Klamath National Forest Lookout Kathy Shoopman has passed away. Kathy died in her home in the community of Klamath River as a result of the McKinney Fire.
Kathy started her career as a lookout at Baldy Mountain Lookout, west of Happy Camp, in 1974. Since then, she has staffed Lake Mountain Lookout, and most recently staffed Buckhorn Lookout, a post she has held since 1993. Kathy lived in the community of Klamath River for nearly five decades. Kathy was also a talented artist, gardener, and a devout animal lover.
We share this sorrow with each and every one of you and we know that individually, and as the supportive community that we are, we will find many ways to honor Kathy’s life and service and keep her spirit in all of our lives.

Very sad that a fine community member and servant of our fire prevention personnel has been lost.

There is some lingering mystery though. Are we to assume her home burned from the fire? That is not consequential now, yet the press release offers few details to help us understand what aspect of the McKinney fire brought her demise.

Such a wonderful person and a great loss to the community. She spent 50 wonderful years looking out for our forests, only to be claimed by fire. It is one of those things that make no sense to me at all. My most sincere condolences to her family and many friends. RIP Kathy Shoopman and know you are loved and missed by many. God bless.

Thoughts and condolences to friends and family. I did not know Kathy but if she has worked for the FS since 1974 she must have a strong background in wildland Fire behavior. Very concerning.

Rest In Peace Kathy… (I’m a former lookout in MEU)