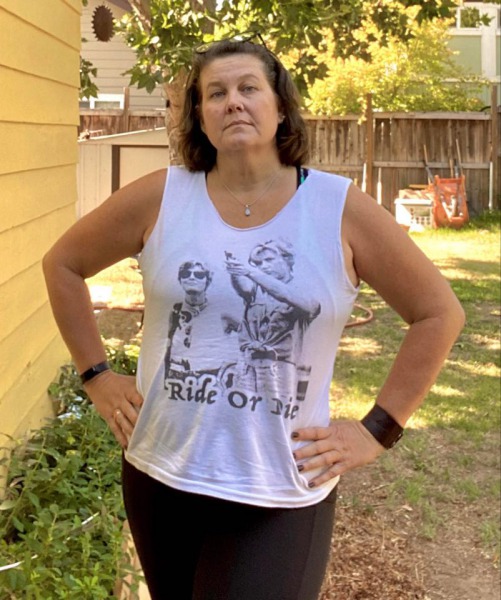 Since the beginning of the COVID-19 pandemic, Mendocino County resident Kristin Hills worked remotely, wore a mask, and practiced social distancing seriously. In the interest of utilizing Mendocino’s County’s virus testing apparatus, Hills volunteered to be tested in June and, within one week, she got notice she had tested positive for the virus. What transpired from there, from the quarantining to the contact tracing to publicly outing herself as having the virus, provides insight into a rural public health agency’s efforts to build a bulwark against the advancing tide of the global COVID-19 pandemic lapping at the county’s shores.

Hills rigidly followed pandemic protocols working towards “protecting others more than myself.” She described wearing masks in public settings, maintaining a distance of six feet from others, and utilizing hand sanitizer and handwashing after venturing into public places. Hills generally refrained from public gatherings other than small, outdoor, one-on-one visits with friends and two Ukiah Black Lives Matter events. She carried herself with Public Health’s mantra in mind: “act like you have it and could potentially infect others.”

Hills identified pandemic protocols that were hard to manage: maintaining consistent home/social/work bubbles. She described her spouse and children working hard to keep their physical interactions with a select few but found their stable home grouping soon expanded to 15 people.

On June 7, Hills attended one of Ukiah’s Black Lives Matter rallies. Later that week, acting out of “good health practice and good civil duty”, she registered for a testing appointment. The earliest appointment that she could attend was on June 23. With the test nearly two weeks away, Hills carried on working remotely and helping run her household. Around June 15, she described having a mild sore throat throughout that week. She said, “my symptoms were so mild that I honestly didn’t even notice the slight numbing of taste/smell until I found out I was positive on June 30.” Upon learning of testing positive for the virus, Hills said, “I was retroactively trying to reconstruct my symptoms.” 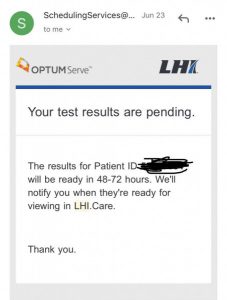 Hills feels “fairly certain that I did not contract it at the Black Lives Matter events due to the timing of the onset of symptoms, the date of the event (6/7) and the date of my test (6/23), and my other actions that have been in line with public health order.” She surmises that “I contracted it by shopping, but potentially could have gotten it from someone in my home pod (although I was the first to experience any symptoms), particularly as one of our members was working in customer service. For that to be plausible, though, they would have had to have been asymptomatic.”

Seven days after getting a swab inserted deep into her sinus cavity inside an ad-hoc medical facility housed in a fairground multipurpose room, Hills received an email informing her she tested positive for the virus. When she got the news, she described being “surprised” and feeling “concern for my family and anyone else I had been in contact with.” 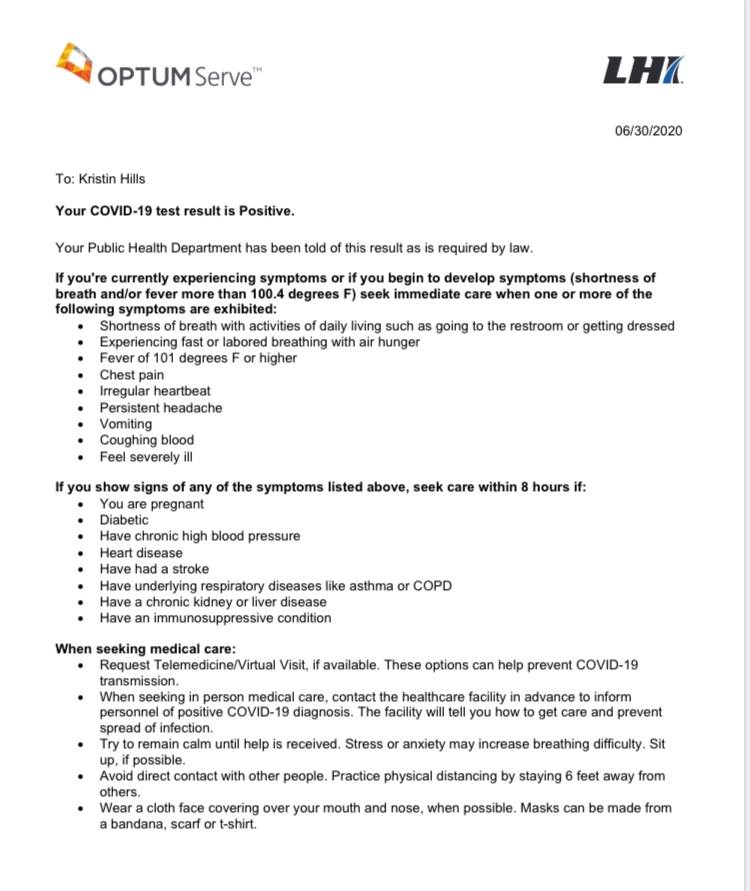 Immediately, Hills said Public Health “worked with me on my symptoms and contact tracing and gathered the information of all of my friends and family.” Hills described “there are 6 other people who live with me (three part-time by staying overnight) and a total of 15 people on our ‘quaran-team’, which includes the families of three teenagers and young adults who have been here overnight.”

After consulting with Public Health to assist in contact tracing, Hills was directed to isolate from July 1-3, for a total of 10 days after her positive test. Hills said her immediate family was directed to quarantine until July 7, 14 days after her positive test, “and therefore, 14 days after they had known contact with a positive COVID case.” Mendocino County Public Health asked that all of the members of Hills’s quaran-team be tested.

Public Health also ordered Hills family to undergo testing at Ukiah’s OptumServe site on June 30. Hills said they just “showed up” and personnel at the testing site said the tests would be processed through the University of California San Francisco because “results were expected faster” in approximately five days. Hill said that Mendocino County Public Health “did nothing to facilitate” the testing. After nine days and being “incredibly persistent,” they were contacted and told all results were negative except one was “lost.” While waiting for the test, Hills said her family chose “to remain under quarantine as a precautionary measure to protect our community at this point, without direction from Public Health.”

Reflecting on her experience within Mendocino County’s Public Health apparatus, she described the county’s public health personnel as “patient, kind and interested in my experience.” Hills ended up talking with “officials from Ukiah and also with folks from LHI/OptumServe in Ukiah, and even Wisconsin and Florida while they followed up and tried to get to the bottom of the results from my family’s tests through UCSF.”