Odd, Old News: A Trip Up the Coast to Crescent City 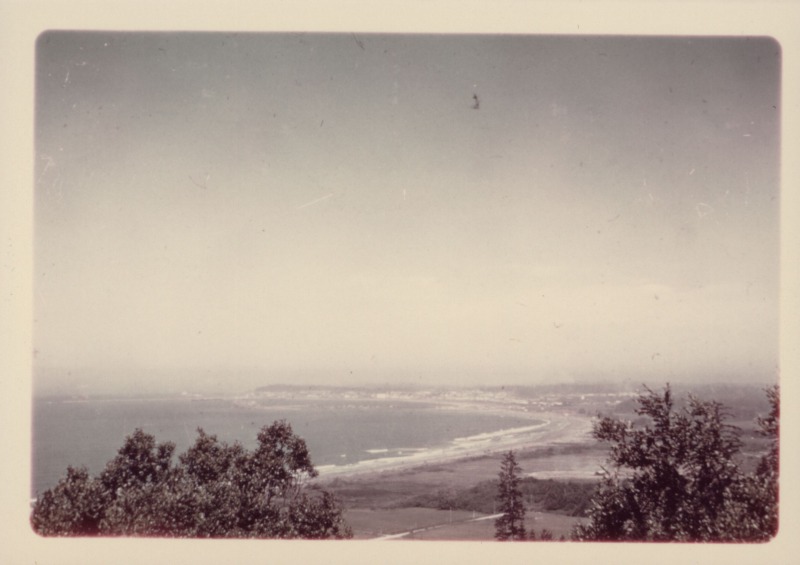 Nuggets of old news are served up by David Heller, one of our local historians.

The State Highway Act of 1910 made possible the construction of many new roads in California, including all of the highways now connecting Humboldt County to the rest of the state. For the first time, convict labor was used for much of the road building in Mendocino and Humboldt counties, a practice followed in thirty-two other states. County roads were widened, re-routed, graveled, and made ready for increased traffic as state highways.

Last week’s Odd Old News comment section brought to light the Last Chance section of US Highway 101, and prompted this week’s article about the communities along the northernmost stretch of the highway that was still under construction in 1919.

By 1922, most of the new route up the coast north of Blue Lake was drivable, but construction continued for a number of years in problem stretches. The building of the Douglas Memorial Bridge over the Klamath River at Requa began in 1924, and was finished in 1926, soon eliminating the use of the Requa ferry that was deemed “the worst single obstacle on the highway”.

After procuring the necessary right of ways, the final unfinished gap of six and a half miles was completed in 1928. It extended “from the end of the present state highway at Wilson creek to join the completed roadbed of the new highway on Hunters creek, about two miles the other side of the Douglas Memorial bridge, which section was built by convict labor a couple of years ago.”

It took about a decade of hard labor to turn the route into the Redwood Highway which “paved” the way for the coming flood of tourists travelling north to experience our magnificent redwood forests and parks, and the coastline’s scenic beauty. This week Odd Old News will travel up the North Coast’s Redwood Highway and look at the local news from towns along the way.

A TRIP UP THE COAST TO CRESCENT CITY From Blue Lake to Oregon Line, a Distance of About 125 Miles, Greatly Enjoyed MANY IMPROVEMENTS ARE NOTED Crescent City and Del Norte County Looking Forward to an Era of Great Prosperity in the Near Future
Blue Lake Advocate
September 13, 1919

A trip up the coast as far as the Oregon line in Del Norte county, a distance of about 125 miles, always creates to the traveler a desire to visit that section of country again. The scenery is simply grand. From Blue Lake to Trinidad the roads are in fine shape. Despite a few sharp turns in places between Trinidad and the mouth of the Klamath River an ordinary automobile can make good time, averaging twelve miles an hour. Such was the record made by F. E. Peaslack, the district representative of the International Correspondence Schools of Scranton. Pa., who, accompanied by A. L. George of the Portland Feed Company and Editor Gus. Perigot of the Blue Lake Advocate, made the round trip this week in his Ford. The roads were muddy in places owing to the rains of several days previous, otherwise they were found in fair condition.

Trinidad and Vicinity– At Trinidad the people there were waiting for the visit of the Pacific Fleet while on its way from San Francisco to Oregon and Washington ports, but they were somewhat disappointed as the big ships passed there too early in the morning. It is understood that on their way back some of the big ships will swing into Trinidad for a visit.

At Stone Lagoon– At Stone Lagoon Mayor John Plitsch, who owns 400 acres of fine dairy land, reports good crops all through that section this year and the dairymen and farmers are doing well. He is also acting as road foreman in that particular section and he takes pride in keeping the highway in excellent order. Mr. and Mrs. Plitsch are now driving a fine new Mitchell six car. William Graham and wife of the Stone Lagoon Inn reports as having done a good business this year there being many tourists going back and forth almost every day. The ducks in the lagoon are already coming in, which presages early rains and fine hunting there next month when the duck season opens.

Orick Is Prosperous– At Orick a crew of men are busy building a new piece of highway, about three miles long, from Freshwater Lagoon to the foot of the hill. The road follows the ocean nearly all the way, just around the bluff, and when finished it will be a great improvement, doing away with the steep Orick hill. Reddy and Wilthemherst are the contractors, receiving $37,000 for the job. Webster & Chaffey, who conduct the store and hotel, are enjoying a good business there. The cheese factory managed by A. D. Oliver is also a busy institution, making some of the finest cheese in Humboldt county. A fine new school house will soon be built there, and taking everything in consideration Orick is as flourishing a place as can be found anywhere along the coast. Some fine dairy ranches exist in that valley and along Prairie Creek. 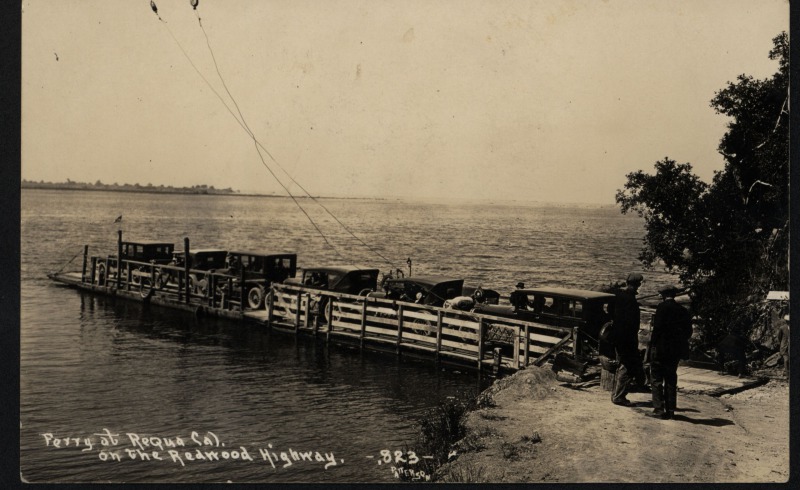 (Continued…) At the Mouth of the Klamath at Requa– At Requa much activity prevailed this season. The salmon cannery in charge of Superintendent Field has been kept quite busy since the opening of the fishing season from July 1st to September 6th. It is estimated that about 6,000 cases of salmon were canned during that time. The fall season will open on September 20th, lasting until December 1st. The fishermen made good money there this year, receiving seven cents per pound. Jerome Hackteman, the secretary of the Fishermen’s Union at the Klamath, reports that more money has been paid the fishermen this year than at any time before.

The shake mill at Requa has been running steadily all summer, but it is expected that it will shut down within a few weeks. Shakes are commanding a good price at present. Del Norte county is having a new ferry boat built at the Klamath, David Ball being the contractor. The latter reports that the new boat will be finished within a few weeks. It measures fourteen feet wide and forty feet long, and it will accommodate eight small auto cars at one time. Stacy Fisher is the trusty ferryman. The ferry will be operated by an endless wire cable, which will give perfect satisfaction.

Engineer Norman R. Smith is also busy building a new boat at Requa, one which will carry 100,000 feet of lumber. When completed, the boat will ply between Requa and up the Sacramento River, via San Francisco. It will transport lumber to the Sacramento Valley and returning it will bring all kinds of freight from that section. It is built in such a shape that it will be able to cross the Klamath River bar at almost any time. The cheese factory at Requa in charge of Superintendent Tinner is also a busy institution, receiving at present close to 1500 pounds of milk daily. Some rich dairy ranches can be found in that section as far up as Terwah Creek, some six miles from Requa up the river. 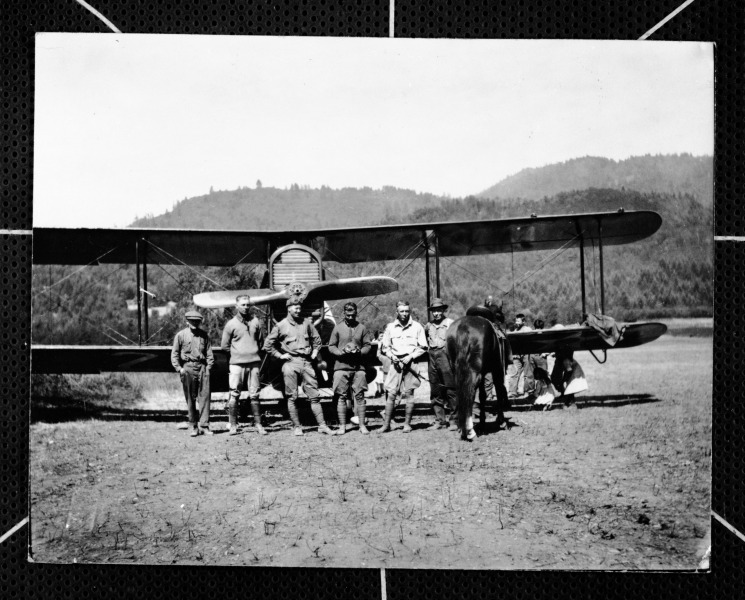 (Continued…) At Crescent City– Before reaching Crescent City, Contractors Palmer and McBryde have a crew of about 25 men at work building the 8 miles of State Highway from Last Chance to Cushion Creek at the foot of the steep Ragged Hill. The handsome sum of $198,750 is the contract price paid them by the State Highway Commission to grade that distance. It is an exceptionally rough country to build a road through, following the ocean nearly all the way from where it begins on the DeMartin ranch.

Crescent City people are very anxious to see the Highway Commission continue the building of that highway to the city limits, a distance of about four miles, thus doing away with that back road along the beach, which is almost impassable six months in the year on account of shifting sands and huge logs and debris washed there by the high tides. This piece of road is a necessity and it should be constructed at once.

Last Saturday about noon the beach was lined with people who waited for the landing of the Curtis biplane of the Humboldt Aero Club of Eureka. The aeroplane arrived in time, covering the distance between Eureka and Crescent City, 100 miles, in one hour and twenty minutes. Dayton Murray of Eureka was the aviator in charge and he was accompanied on the trip by Irving Clay of the Humboldt Times. It remained here Sunday and Monday until 3:30 p. m., when it flew back to Eureka in about the same time. Walter Caltoft, the manager of the Central Creamery at Crescent City, accompanied Dayton Murray in the flight. While here Saturday afternoon and Sunday the plane made 33 “business” flights, taking one passenger each time who was more than willing to pay the sum of one dollar per minute while in the air. Each flight lasted ten minutes. Aviator Murray is an expert at the business, and he is always safe in his flights. He will give Humboldt county people some demonstrations at the Ferndale Fair next week.

It is the intention of the Humboldt Aero Club to soon purchase a 12-passenger aeroplane which will be used between San Francisco and Eureka and Portland, a distance of about 700 miles.

The Del Norte Supervisors at their meeting next week intend to pass a resolution giving the U. S. War Department power to use the $200,000 raised by the county to start the building of the 3,000-foot breakwater. The Government has agreed to appropriate $290,000 for the improvement of the Crescent City harbor. Ultimately it will cost the Government about $6,000,000 to complete the work as projected. With its harbor improved and with the advent of a railroad from Grants Pass, Oregon. Crescent City and Del Norte county will be bound to forge ahead. The natural undeveloped resources of our sister county are immense and once in the act of development its people will realize a period of genuine prosperity. The county boasts of having the finest redwood timber belt in the world, saying nothing of its mineral and other undeveloped resources.

At Smith River– Smith River Corners, as it is called, is a lively place these days. A large new creamery plant is in course of construction, expecting to be completed within a couple of months. It is owned by a San Francisco firm. A large new public hall or auditorium is also being built there, and there is some talk that the Brookings Lumber Company, nearby, may erect a shingle mill In the near future. The Owens people of Eau Claire, Wisconsin, are principal owners of the Brookings mill, and they also own 87,000 acres of fine redwood timber land in Del Norte county, including the famous redwood grove on Mill Creek and along Smith River. It has been estimated that a particular claim of 80 or 160 acres in that grove will average one million feet per acre, which is probably the largest stand of timber per acre in the world. This would be an ideal place for a redwood park and the Government may take advantage of this fact if it wishes to “save the redwoods.”

Del Norte County Road Work– On September 3rd, the California Highway Commission directed Highway Engineer Fletcher to call for proposals for the construction of a section of the State Highway in Del Norte county between Crescent City and Cushion Creek, a distance of about three miles.

There are many, but here are the most recent: