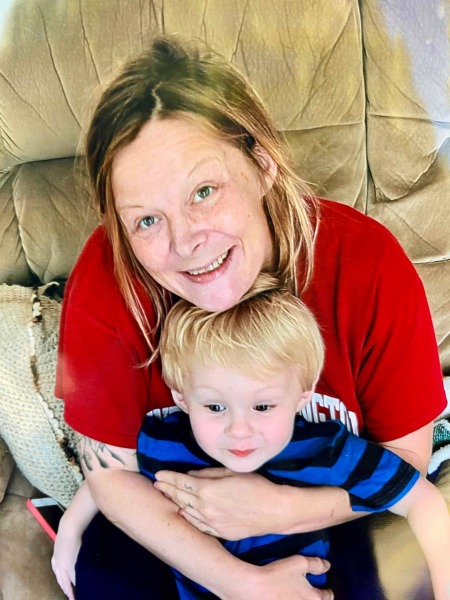 A mother and child are still missing after a crash north of Leggett 24 hours ago. The woman, Trinity Bray, was driving a vehicle that struck a tree south of Confusion Hill at mile marker 98.3. The adult male passenger received major injuries.

The 34-year-old McKinleyville woman and her 3-year-old child, Anthony, left to get help. They were seen walking northbound on Hwy 101, but they haven’t been seen since.

According to Trinity’s adopted mom, Julie, “Anytime she has ever gotten into an issue she calls me. I tried to call her, but [the phone] keeps going right to voice mail. All I can think that she’s unconscious in the woods.”

Julie believes Trinity would have tried to come home if she could because “she was supposed to be signing a rental agreement yesterday; she was going to be getting her own place.”

Yesterday, Julie, began searching alongside Hwy 101 on foot. She went out looking again today. “If I’m yelling for her and she can actually hear me, she’ll probably come out,” Julie told us.

If anyone has time to help, Julie said, “We need some assistance. It is just me and two of my girlfriends.

If anyone has any information, they are asked to please contact the Garberville CHP Office at (707) 923-2155.

On 11/30/2020, at approximately 1150 hours, a 2011 Toyota Sienna traveling northbound on US-101, south of Confusion Hill, collided with a tree along the east road edge, for reasons still under investigation. Officers from the Garberville CHP area were called at 1200 hours, responded to the scene and arrived at approximately 1218 hours. One of the occupants identified as Steven Gutierrez, sustained major injuries and was transported from the scene for medical care. Two other occupants, a white female adult identified as Trinity Leigh Bray, and a male juvenile identified as Anthony Florentine-Perez, voluntarily walked away from the scene prior to CHP arrival. Bray and Florentine-Perez were reported walking northbound along US-101 and did not appear to be injured as a result of the collision. Officers searched the surrounding area and businesses and were unable to locate Bray or Florentine-Perez upon arrival.

CHP Garberville was notified by friends and family of Bray’s, she had not made contact nor been seen since the accident. Officers were dispatched to all known current and prior addresses of Bray’s to confirm her and the child’s welfare. A welfare, “Be On the Look Out” was broadcast to adjacent and neighboring law enforcement agencies. CHP Air Operations, officers from the Garberville CHP, and Leggett Valley Fire Department conducted a coordinated air and foot search of the area surrounding the collision scene and were unsuccessful in locating either party. The investigating officer attempted contact with Bray at all known prior contacts and a cellular phone locating ping was initiated to attempt to locate Bray. All attempts were also unsuccessful.

If anyone has any further information regarding the whereabouts of Trinity Bray and/or Anthony Florentine-Perez please contact the Garberville CHP area office at (707) 923-2155.