Convicted Sex Offender Living in Willits Allegedly Beat His Wife With a Maglite, Fled, and Has Not Been Seen Since

All photos of John Couthern were shared by his wife unless otherwise noted.

On the night of June 10, 2020, convicted sex offender John Lann Couthern allegedly used a Maglite to savagely beat his wife in Willits, California. He fled the scene, cut off his parole-required ankle monitor leaving it on the side of Highway 20, and has not been seen since.

According to the Willits woman who suffered at the hands of Couthern (Redheaded Blackbelt has chosen to withhold her name so as not to revictimize her), he was released from a 22-year prison sentence in January 2020. She described marrying him in February 2019 while he was still incarcerated. The woman said that, in the last month, “we agreed that the marriage was not working. We didn’t know if we could do an annulment or divorce because the courts have been closed because of COVID.” Once they decided to dissolve their marriage, the Willits woman said, “It was awkward for sure but there was no screaming, yelling, or fighting.”

On the night of the attack, she described sleeping outside in her yard where she had set up a bed and television “because it gets hot at night” and woke up startled at 11:00 pm feeling “like John was standing over me.” She recalled getting out of her bed and looking around the yard and found him “lurking by some bushes.”

Though odd, fatigue took over and the woman recalled returning to her bed. It was approximately 1:30 a.m. when she woke up to Couthern “smashing me in the head with a flashlight.” As the blows rained down upon her, she remembers Couthern saying, “I love you. Look what you’re making me do. I’m going back to prison for attempted murder.”

Lieutenant Hendry described Willits Police Department Officers arriving on scene and finding Couthern’s wife “bleeding profusely from the head and holding her head with a towel covered in blood.” She was taken to Howard Memorial Hospital, officers proceeded to obtain a search warrant, and officers searched the property for any indication of where Couthern might have gone.

After beating his wife to the point of requiring 30 stitches and staples, Willits Police Department’s Lieutenant Derek Hendry surmises Couthern fled the area driving his gold Ford Ranger and removed the ankle-monitor required by his parole conditions. Lieutenant Hendry says parole was notified the ankle-monitor had been removed and left on the side of Highway 20 and Couthern could have proceeded west.

Couthern’s wife said she knows him as a “survivalist” and described many letters sent to her from prison where Couthern described how to live off the land. In the days preceding the brutal attack, she had been informed by a friend in Willits that Couthern was seen at the local Dollar Store buying large amounts of groceries and supplies. In the aftermath of the attack, she recounted a strange decision Couthern made that now makes sense in the light of his disappearance: he dyed his gray hair brown. These two factors led her to conclude Couthern was “planning his escape.”

Since his release from prison in January 2020, Couthern has been overwhelmed with life outside of the institution. His wife described him saying, “The world is crazy, it moves too fast, and jail was helluva a lot easier than this.”

Couthern is listed on the Megan’s Law website for the crimes that led him to his extended prison sentences. His wife said his previous crimes include “oral copulation with a minor” and “kidnapping a young girl and a 25-year-old woman.” 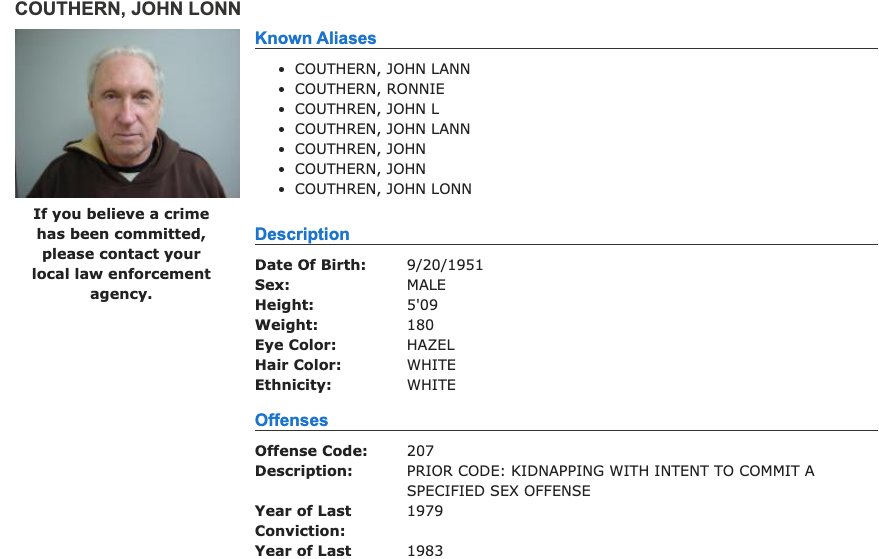 Lieutenant Hendry said a BOLO has been sent out to all Northern California law enforcement and Probation told him they were collaborating with Federal Marshalls and Fish and Wildlife in their search for him.

John Lann Couthern is 68 years old, 5’ 8’’, and 180 pounds. He is clean-shaven and currently has brown hair. He was last known to be wearing a brown hoodie with the text “VOKAL” across the front and possibly Kirkland brand blue jeans. The vehicle he is last known to be associated with is a Gold Ford Ranger with a gold camper shell (License CA#5W25626). 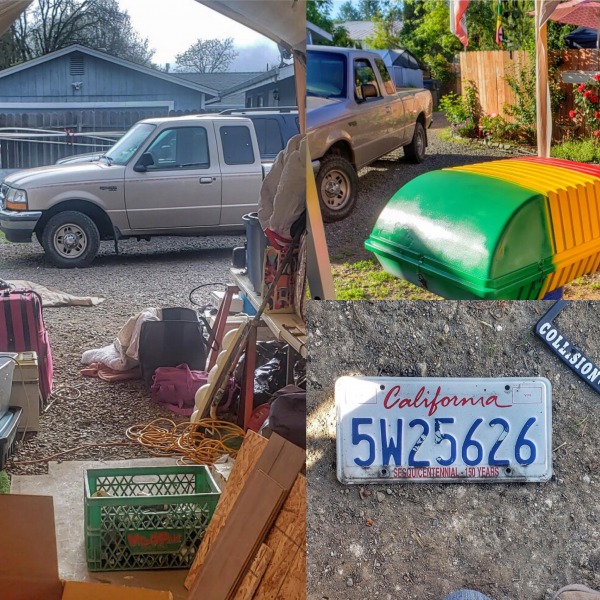 Collage of truck and license plate.

Lieutenant Hendry asks for the public to keep their eyes open for Couthern: “We know this guy has been in prison for 22 years for a sex crime. He gets out, he beats his wife with a flashlight, he cuts off his ankle bracelet to avoid detection. If the public happens to see him or his vehicle, keep your distance and dial 911.”