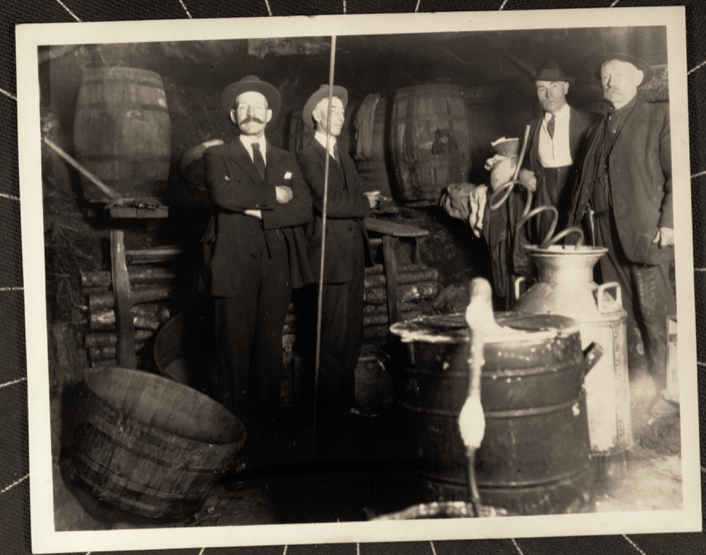 “Four well dressed men standing with a row of barrels behind them looking at the canisters in front.” [Photo by Charles Edward (“Ed”) Seely from HSU’s Humboldt Room Palmquist photography collection]

For the next few weeks Odd, Old News will be taking a look at the 1920-33 alcohol prohibition period in Humboldt County that followed the passing of the 18th Amendment. Federal law was ignored locally in much the same way as in the modern marijuana prohibition era. Making moonshine was widespread, and required some ingenuity to avoid the county dry squad out to enforce the law. Underground operations, tunnels, and the use of goose pen redwoods were some of the tactics used by bootleggers to hide their production. In Southern Humboldt dodging revenuers became an art form as will be shared in a future post.

Widely viewed as a failure, the “noble experiment” of prohibition did cut back on America’s consumption of liquor somewhat, but it did not achieve its goals of solving social problems and curbing crime and corruption. In fact it increased organized crime. Although it made it harder for the drinking man to get his potations from the local groggery, hotel bars and saloons found ways around the law. In some areas the term blind-pigging came into use as thirsty patrons were directed into back rooms to meet the ‘blind pig’. Personal consumption of alcohol was still allowed in the home in limited amounts. 10 things you should know about prohibition stated, “The Volstead Act included a few interesting exceptions to the ban on distributing alcohol. Sacramental wine was still permitted for religious purposes (the number of questionable rabbis and priests soon skyrocketed), and drug stores were allowed to sell “medicinal whiskey” to treat everything from toothaches to the flu. With a physician’s prescription, “patients” could legally buy a pint of hard liquor every ten days. This pharmaceutical booze often came with seemingly laughable doctor’s orders such as “Take three ounces every hour for stimulant until stimulated.””

Homemade moonshine was made with care and pride by some, but many took shortcuts in making their product and alcohol poisoning was not uncommon, particularly when moonshiners moved away from the use of stills and went to using denatured or wood alcohol… to deadly effect.

In the next few weeks we will be sharing some “Still life portraits” from the first prohibition era in Humboldt county, first up are accounts of two of the more ingeniously hidden moonshine plants that were found.

“Staggering, elated chickens, laboring under the influence of too much ripe mash on the ranch of Joseph Loren at Mad River slough on the peninsula west of Arcata, Thursday, brought grief to their owner, for their actions confirmed a lurking suspicion in the minds of the dry squad members, who unearthed the most elaborate and completely hidden still and moonshine plant yet found in their numerous raids.

Suspicion changed into certainty when the raiders saw Loren suddenly take off across the fields at their approach, and after bringing the proprietor to a sudden halt with a shot fired in the are, the squad started a long difficult search for the hidden still. Not until after a long time spent in searching the brush around the house and penetrating every possible hiding place for the contraband kettle and coils did the raiders find the object of their hunt at the end of a 40-foot tunnel under a sand dune.

The entrance was made through the top after probing had established the squad being unable to locate the almost perfectly hidden entrance, a trap door at the end of a hog pen built up against the sand hill. At the end of the tunnel they found a room dug out of and boarded up to house safely and comfortably two large stills, one capable of holding 50 gallons of mash and the other 25 gallons. The stills were cemented into place and fitted with a perfected oil burner, draft being supplied by compressed air, according to the squad.

Ready for use, they found 13 50-gallon barrels of mash, and 30 gallons of newly made moonshine, enough of which was taken for evidence and the remainder destroyed. Loren said that the larger still had a capacity of about a gallon of moonshine an hour, and that by the use of two men, both still could be kept going 24 hours a day.

The squad had gone out to the slough to raid another place, where they found nothing, however, and as they had a warrant for Loren’s place, and notice the antics of the chickens, made the raid there.

Loren was taken before Justice of the Peace A.B. Adams in Eureka who set his bail at $1000 cash or $2000 bonds. He was unable to raise the money Thursday and went to the county jail. 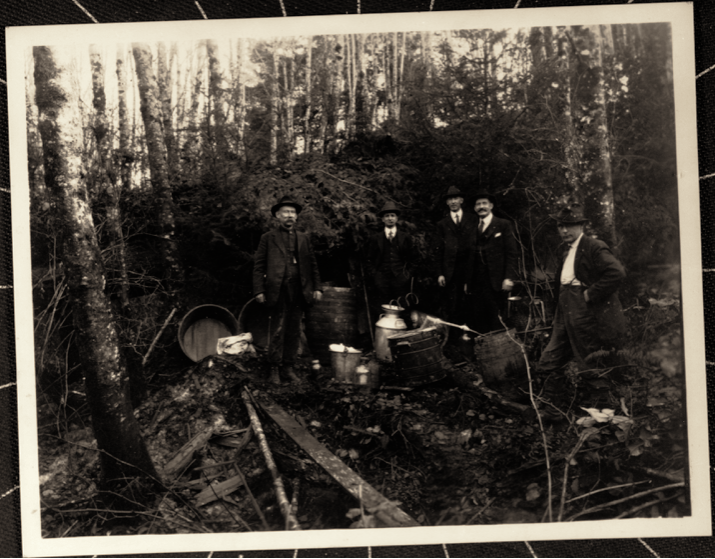 Fruit juice or wine, it makes no difference, is a good fertilizer as proven by the splendid growth of cabbages depicted above. The picture is that of the cabbage patch of Ben Dandrea of the American Exchange hotel, at this home 415 S Street, in the East End. The value of the red wine, although Dandrea and his attorney call it ‘fruit juice’, as a fertilizer was discovered by the County dry squad last month when it raided Dandrea’s home and was attracted by the luxurious cabbage growth in his garden. Being farmers themselves, naturally they were interested and began digging to get earth for a soil analysis. As they dug a more familiar odor became more and more pronounced and when their implements struck wood, the secret was out. The wood was that of a barrel and further examination developed that the barrel was filled with red wine and that the fumes of the wine seeping through the wood had nourished the cabbages. There were 17 cabbages all in a row, and under each cabbage was a 50-gallon barrel of wine.

Much Fertilizer on Hand

Of course a farmer would have a reserve supply of fertilizer for the next crop so Dandrea’s bar was investigated and in it were found 10 more 50-gallon barrels of the fertilizer, fruit juice or wine, whichever the court may determine it to be, besides a 700-gallon tank of the same liquid. As the Wright act had not yet gone into effect the county squad could not seize the wine so leaving it where it was they reported to the City Police and to aid the city further one of the dry squad swore to a complaint in the Police court charging Dandrea with the possession of wine.