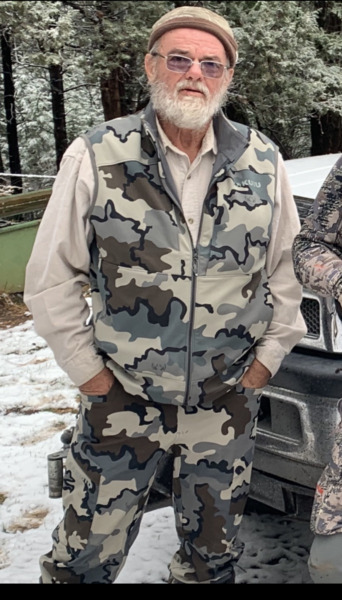 With heavy hearts we announce the passing of Clifford Roy Wilson, of Klamath falls OR, Cliff passed unexpectedly on December 20th, 2022,in Fortuna, Ca, at 71 years old.

Cliff was born in Scotia California on September 18th, 1951 to Jack and Barbra Wilson. He grew up in Fortuna California and attended South School, Town School, graduating from Fortuna High School in 1969. He married his wife Lydia “Lee” Rogers in 1974, they were blessed with three sons Shiloh, Seth, and Luke. His children were the light of his life.

Cliff worked hard providing for his family, passing down his incredible work ethic to his sons. Cliff followed his father in the timber industry for a few years until he found his passion, line work. He was indentured as a lineman in 1984, a career he loved and was very proud of. He began his career at PG&E in Northern California for ten years, he retired in 2021 from Pacific Power in Klamath Falls, Oregon after 37 years of service as a respected lineman.

Cliff was an avid outdoorsman who loved ocean fishing, hunting, cutting firewood and above all spending time and making memories with his family. When Cliff was not working you could find him enjoying the outdoors whether he was fishing or hunting Caribou in Alaska, Elk hunting in Eastern Oregon, Salmon fishing out of Humboldt Bay or Tuna fishing out of Brookings. Cliff was an amazing fisherman and hunter.

In lieu of flowers please bring your favorite story of Cliff.

Nature Versus Progress: A Look Back at the Early Days of Highway 36

Very cool article that weaves the past and present plus the ...

The problem is people that have no immunity against the BS ...

School Bus and a Small SUV Collided Near Orick This Morning

My guess is a Subaru

Trees Down and Asphalt Buckled: Mattole Road 'Still Not Passable'

That section of road is owned by the parks, explaining why t...

Man Barricaded Himself in RV, Woman Assisted Him, Says HCSO

I’m betting they did hide the real stash… Hence ...