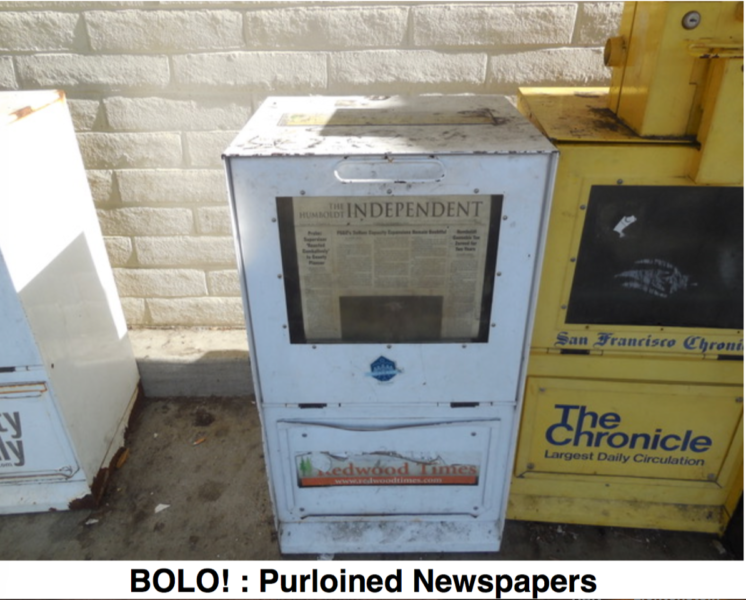 The Independent So Hum newspaper in a box. [Photo by Paul Modic]

Is it time to call 911 and get out the torches and pitchforks because I am outraged at this latest sign of social degradation and desperate thievery in our little town! What can be done?

Do you ever go to the newspaper stands outside Ray’s to get The Independent on a Tuesday or Wednesday and find that they’re already gone? Hey Garberville. What’s Going On with that? Uncool.

I drove into the parking lot yesterday and saw a guy go up to the Indie box, take out a big pile of papers and stash them in his bag, probably about fifty, ones which Ray Oakes, octogenarian paperboy, columnist about all things Los Angeles music in the ‘50’s, and pulse-taker of the community with his Question Man segments, had put in earlier in the day.

What to do? Take his picture, another of his license plate, and then follow him home to get a photo of him unloading the purloined papers at his near by house like a good Garberville citizen and bored busybody? Publicly shame him for his lack of ethics?

I mean, it’s one thing to steal a bottle of flavored water at Ray’s, that doesn’t hurt anyone except Ray’s bottom line, but using the Indie for fire starter seems like book burning to me.

The guy needs to be brought down! Hard! Found guilty in the court of pubic opinion and tossed on the scrap heap of alleged violations of our codes of conduct, right? Or I could interview him, ask him why he feels he has the right to deprive us news-starved denizens of another two thousand word story about the demise of the weed business, and other compelling news.

No, he’s a hothead and would get upset at me, me, just the messenger in this sordid tale of malfeasance. Then we’d be shouting at each other on Main Street and someone might report me for disturbing Garberville’s fragile peace, another example of G-ville’s southward plunge, and I’d get thrown in the stocks, A K A ridiculed on the Hey Garb site..

Why do I care? It’s just some very thin newspapers, maybe he hands them out to cold people to make warming and cooking fires? Maybe he’s actually an unsung civic hero, a humanitarian?

Well, I care because I wrote a story telling how a group of us started the Indie, it’s going to be published in next week’s edition commemorating the 25th anniversary of its birth, and I don’t want him taking those papers also. It’s a good one and everyone should have the opportunity to read it. (I have a bunch of old Independents and other papers awaiting recycling—I’m thinking of trading him a pile of those in exchange for not taking any of next week’s issues.)

His car was parked next to mine with the window cracked open half an inch and he had gone into Ray’s. I slid the copy of my story through the opening, and it landed face up on his front seat.

Hmm, I wonder if he’ll get the message: we’re on to you dude!

Later I was driving home, saw him walking along the road a mile from his house, had an idea, stopped at Ray’s parking lot, took out a notebook, and wrote a message: “Please don’t take the Independents next week. You wouldn’t want your picture, name, and license plate on the local crime and gossip Facebook page, right?” (Of course I would never do that, I’m not that gabby.)

I drove over to his house, slipped the unsigned note under his windshield wiper, and drove home thinking really? I was feeling a little giddy, sneaky, stupid, and wondering what is wrong with me, but also felt pretty calm as a righteous vigilante. I figured he’d be upset but he deserved it, right?

About an hour later he called and said, “Did you put that note on my car window?”

“I want to straighten something out about the papers,” he said in a clear, full-throated voice, not sounding guilty or upset at all. “I take some out of there and replenish the supply at places like Chautauqua, I even put one in each shopping cart sometimes. Ray Oakes and Joe at the paper are okay with it, you can ask at Chautauqua if you don’t believe me.”

“I’m on the same side here,” he said. “I don’t like it that people are taking piles of them from the racks either, so I get some to spread around before they’re gone.”

“Yeah, things are usually not what they seem,” I said, sheepishly, surprised the guy wasn’t ripping me a new one.

“That’s true,” he said and mentioned that he was eighty.

“Wow, eighty,” I said. “I was only concerned because the story about starting the Independent is coming out soon and I didn’t want them burned up or something.”

So what’s the lesson here?

MYOB and easy on the BOLO’s…

Well done! I’ll have to try to find a copy of next weeks paper.

The Independent is still printed?

On their website, is news from 2016, including the now famous “Garberville Orange Fence”…

Can I get a mail subscription?

This removal of property should be dealt with using a proper stake-out, some shotgun microphones, and, the thief should receive a “proper English dressing down”, from Mrs Bushnell, who doesn’t do much else deserving of a $100,000 salary…

Please post the new website, or at least the address and price of your mysterious periodical, since it used to be the only sensible aspect, of life in Garberstan…

As noted in the article the papers are in high demand…lol!

Come to think of it, there were never any papers in there, ten years ago…

Guest
Ben Round
Reply to  Permanently on Monitoring

They abandoned their website long ago. Still that same ‘orange fence’ issue posted there. Need a job? Maybe you can become the new webmaster!

Paul is a shining example of what the organization F.A.P. (Friends of the American People, founded by author/activist Philip K. Dick, aka “Horselover Fat” in 1966) has proselytized for decades.

Even in cases where calling 911 is ill-advised—where no actual violations occurred, apart from the brazen breaking of an unwritten law. Anyone can and should fap on suspicious passers-by as well as their neighbors at every opportunity! How else are we going to keep Garberville—and America—great?

Don’t let fear of making faulty assumptions (as occurred in this anecdote) stop you from fapping on anyone who’s behavior catches your eye. You can always clean up the mess later, if necessary.

I think fapping means something different in 2022 than it apparently did in 1966. Please don’t fap on anyone (unless they are into it).

Damn, dude, save your fetishes for alone time.

When people ignorantly pile on some accused person, often after an erroneous accusation, on sites like Hey Garb it often says more about them then it does about the one they’re trashing.
“Think about what you’re saying,” I could ask them, except how can you get through to a rabid pack of junkyard dogs, shadenfreude anyone?
Why do people jump online and support the bullshit that others post about someone? This is what’s called “virtue signaling,” like look at me, supporting this righteous cause, never mind that it’s probably untrue or a half-truth at best.
I suppose I’m doing the same thing, calling out the people who are ever on the lookout for someone to ridicule and report, so call me guilty I guess.
What’s going on here? We identify a harmless action by a flawed person and then try to punish them in the court of public opinion. It’s cheap entertainment and I admit it’s kind of fun to see people trashing one another, but really it’s not so much about the victim with problems you’re piling onto, it’s showing the rest of the community what a bored, unhappy person you are.
Bottom line you can’t believe anything you read on those kinds of pages.

Paul – what a great story with a fantastic ending.

I am glad you did not go through public shaming of the man before contacting him first.

I disagree with you on the “MYOB”. You did the right thing for a good cause & during the process you found an ally.

I believe we should ALL mind our own business, if other people’s actions do
not appear harmful to anyone, including the individual doing the action. Otherwise, I follow my grandam’s behavior, I always intervene. I rather end up embarrassed than sorry that I did not say/do anything when I’ve witnessed a questionable action.

I will look for your story next week.

This writing style gives me a headache

Are you a Seinfeld fan? Remember the “show about nothing”?
Kind of like this story…

Random input here: if you are a wood stove user (guilty) the north coast journals office has mountains of old copies from recent editions that were not taken and were brought back when the boxes are refilled with the new edition, free of charge. I know that may not be helpful to the so hum crowd but I assume you guys all hit Costco at least once every six weeks regardless.

Do you have to declare what pronouns you identify with to get the papers?

Ha! At the very least. But if they know you’re burning them, rather than absorbing the catechism, there might be more– though i’m not sure which way it would go. Personal, as in also needing to know your race, income level, fitness/ableness rating, and taste in music, clothing, and sexual practices; or maybe a political wokeness gauge, as in your voting record, tolerance level for deviance, opinion on Twitter controversy, and definitions of the terms “fascist,” “free speech,” etc.

Follow the wrong guy home you end up in a hole on Usal.

I just soldiered through a bought of “upper GI covid&#...

I was just thinking about all the unlawful things these 2 id...

‘The Pressure Is the Point’: The Institute for Justice Has Filed an Amended Complaint for the Lawsuit Against the Humboldt County Cannabis Abatement Program

Dead horse, too little to late.

Weren’t you called out for accusing St. Joe nurses for...

Thank you for telling me what I think..