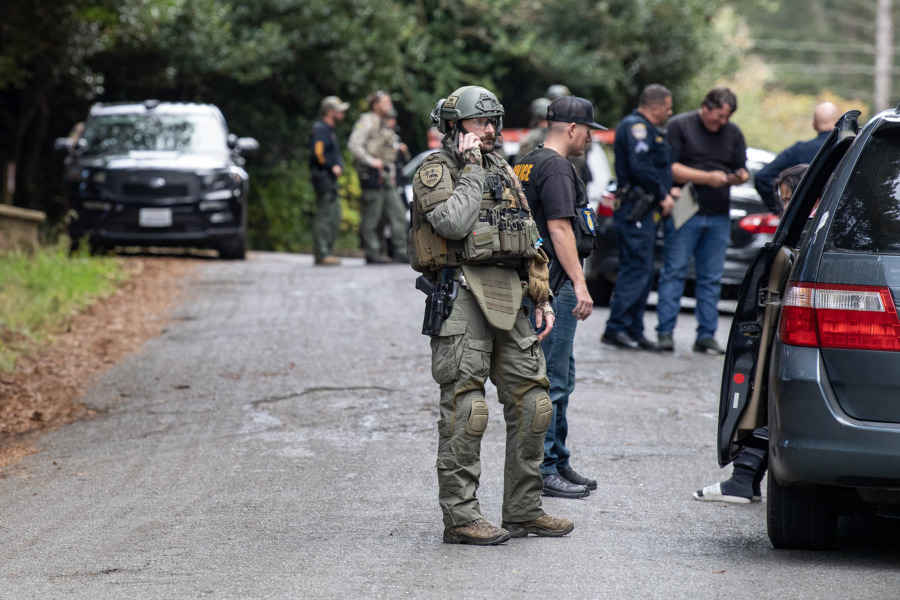 Law enforcement at the scene of Louis Vongphasouk’s arrest. [Photo by Mark McKenna]

On October 10, 2022 shortly before 1:30 a.m., Sacramento Police Department patrol officers responded to the 100 block of Olmstead Drive for a report of a shooting. When officers arrived on scene, they located a male adult with serious injuries from at least one gunshot wound. He was transported to a hospital by the Sacramento Fire Department where he later succumbed to his injuries.

Due to the circumstances, homicide detectives and crime scene investigators responded to take over the investigation. 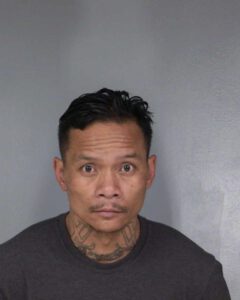 The Sacramento County Coroner’s Office will release the identity of the deceased after next of kin have been notified.

The Sacramento Police Department encourages any witnesses with information regarding this investigation to contact the dispatch center at (916) 808-5471 or Sacramento Valley Crime Stoppers at (916) 443-HELP (4357). Callers can remain anonymous and may be eligible for a reward up to $1,000.  Anonymous tips can also be submitted using the free “P3 Tips” smartphone app.

CBS has no problem releasing the victim’s name. I wonder why the next of kin have yet to be notified? It’s been six weeks.

The next of kin may not be in the US. It’s harder to find family in southeast Asia.

Sorry, I assumed the victim was of the same ethnic group as the shooter. My bad.

A reporter can step up to a neighbor and ask. They have no legal obligation to hold back information that the police do.

It has been really bad. Far left San Francisco/Berkeley views have been propagated to the world via Twitter.

I’m sure this comes as no surprise to anyone watching closely.

Twitter is moving rapidly to establish an even playing field. No more thumb on the scale!
Elon

Thanks for the chuckle.

Musk has always voted Democrat until this year when he said he voted for Mayra Flores (R-McAllen, Texas).

Musk moved the Tesla world headquarters from California to Texas last year and is building a Gigafactory near Austin that will have 10,000,000 square feet of factory floor and create 15,000 new jobs upon completion.

🤔🧐If the cops wanted to level the playing field, they would have had to chase the guy while wearing flip flops over socks…🤷‍♂️😁

the rest of the story. Thank you Kym.

Why is deputy sheriff dressed like a Ukraine soldier? Where are the Russian invaders?

Sleepy joe is paying him to be here!

Because he runs towards the danger you run away from and call people like him….Duhhhhh

Guest
Me
Reply to  justsayin

Because your streets are a war zone and life is cheap to a lot of people. But not to the Deputy evidently.

Another white republican shooting up the place , according to the far left. Crack me up, decades of lousy voting has gotten us here.

Sometimes I agree with you (not always let’s be clear!) Perhaps our democracy is dead due to a combination of 1) Dumbed-down dummies who can’t be expected to vote intelligently on complex issues but also 2) Manipulative politicians and the interests behind them who have decided it’s easier to keep them dumb and manipulate them to vote against their own interests!. Thankfully we have a republic and so we have a constitution and Bill of Rights that cannot be simply voted away by the hordes of dummies who go to the polls and vote straight party lines because…well….it’s all too complicated so they just pick a team and pledge loyalty. I was disgusted as a young man watching the War on Drugs sap our country’s wealth and I am still disgusted by the gullibility and idiocy of the average American voter. Sheep led to slaughter, so easily tricked and convinced. On a good day it cracks me up. But most days it’s just sad. Because it means that democracy cannot really work. It is a farce…a farce to entertain the masses while the wealthy steal all the loot. Bread and circus to keep them occupied….

Unfortunately a republic requires a willing populace otherwise “rights” will be only technically on the books and simply redefined according to political whims. Freedom of press only exists if the press is willing to temper their speech so that it does not turn into rabble rousing. Freedom of religion exists only as long as the religious temper their right to practice so that it does not turn into a destructive cult. Freedom to assemble requires those who assemble not turn into a rioting mob. Every single right requires the public behave themselves voluntarily so that government has no justification or obligation to override rights to gain domestic tanquility. Rights do not control how even a constitutional government exercises its power as much as rights tell the governed what they need to do to keep government from deciding things for them.
The “War on Drugs” was not as much a violation of political rights as it was a reaction to individuals stupidly equating drug use to a right. That is a stupid popular idealization of drug use that continues to this day. Imagine the inanity of thinking every individual has the right to chemical adjustment at will even if the result is horrendous to those around them. That would be like thinking freedom of speech includes shouting fire in a crowded theater- totally self centered and the hell with everyone else. The War on Drugs certainly was a failure because, as the old saw has it, you can’t fix stupid. Certainly not by constitutional government.
This is an interesting essay linked below that talks about the obligation of the citizen in maintaining rights. There are no rights in a population that has no self restraint. “Hamilton and Madison filled The Federalist Papers with warnings about “passions” that inflame public opinion and prevent reasoned deliberation. ” If the public is constantly unreasonable, there are no rights that will protect them from themselves.
https://www.theatlantic.com/ideas/archive/2020/02/a-republic-if-we-can-keep-it/605887/

In 1956 “A Nation of Sheep” was on the best seller list. It was mostly about US voters and their unwillingness to take a stand or really attempt to understand the issues. Bread and circus is not a new phenomena.

Well said on voting opinion and constitution. except for your war on drugs comment..You just voided your whole logical discourse.War is necessary at times.Especially against drug dealers.Street drugs should be illegal, and drug dealers are predators.It is just to war against drug proliferation.

WHY DO PEOPLE HAVE TO COMMENT ABOUT THIS LIKE ITS A JOKE OK. This is about my Brother ok so take your stupid comments some where else ok and have some Respect AND JUST SO YOU KNOW MY BROTHERS NAME WAS
“CHRISTOPHER LEE SMITH” He was a great Man… So please keep your comments to yourself…

That is a pretty big discrepancy. So we have a government ag...

Again, no specifics from you. And, a non sequitor.