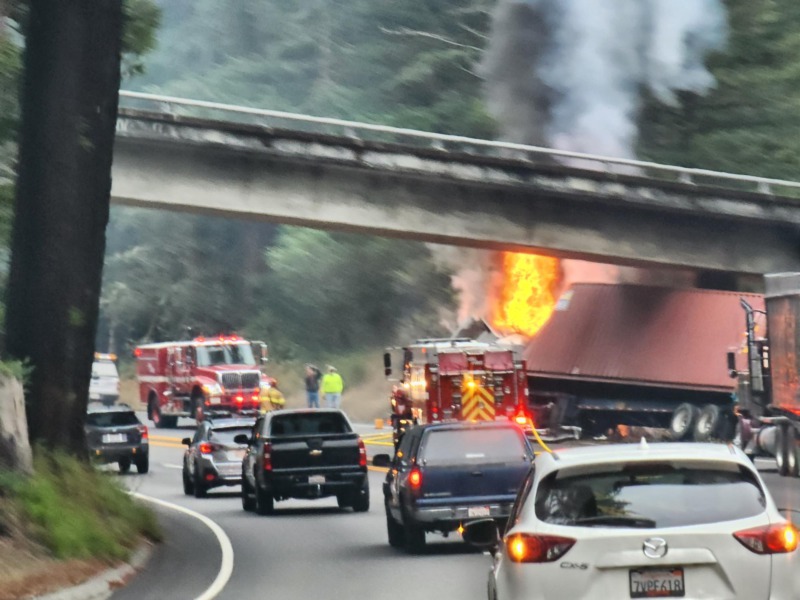 Flames from the semi are affecting to Pesula overpass. [Photo by a local]

About 8:45 a.m., a large commercial truck “ran up on to the guardrail and hit” the Pesula Road overpass south of Weott, according to the CHP Traffic Incident Information Page. The cab of the vehicle is on fire.

The driver had moderate injuries, according to the Incident Commander speaking over the scanner.

The semi, which is pulling a closed container trailer, is in a southbound lane and traffic is moving very slowly in that direction though northbound is moving freely.

UPDATE 9:06 a.m.: The CHP reports, “At approximately 0840 hours a semi truck pulling a closed trailer traveling on US 101 went off the roadway and hit the guardrail and then continued south and hit the Pesula Road overpass concrete support beam. The truck is on fire and the driver is out of the vehicle. Please stay clear of the area and allow police and fire to perform their duties.”

UPDATE 9:08 a.m.: According to Caltrans QuickMap, traffic is moving very slowly through the area in both directions. 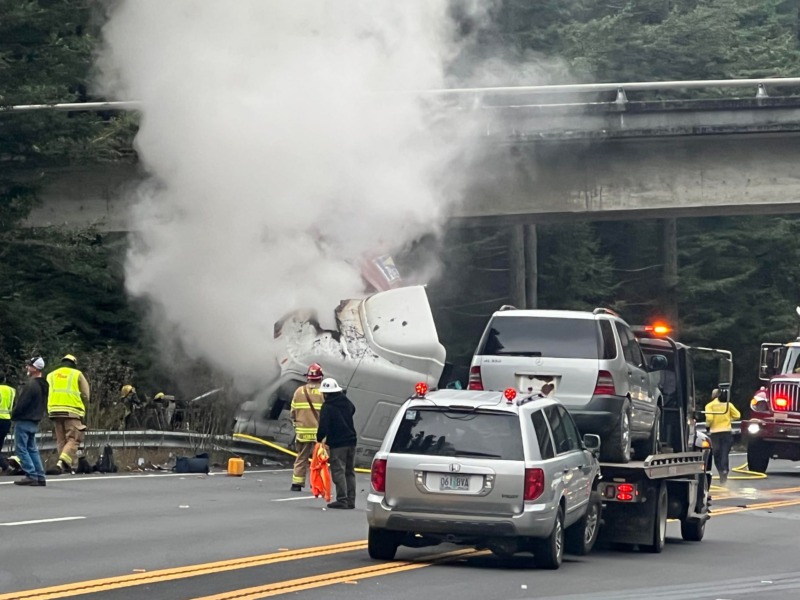 Smoke pours from the semi’s cab while traffic is snarled nearby. [Photo by Chris Brannan]

UPDATE 9:35 a.m.: Another photo this one from Daniel Primerano that captures the difficulty emergency personnel are facing. 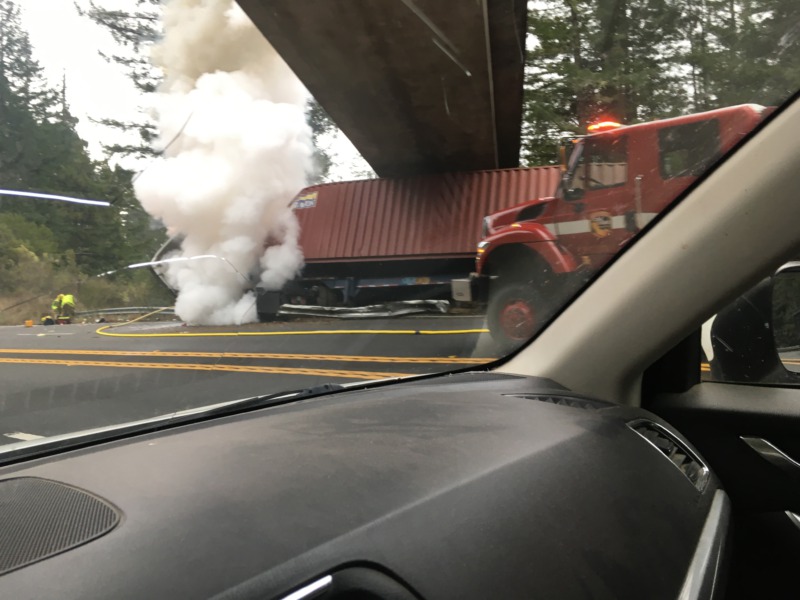 Smoke billows from the cab and past the Pesula Road overpass. [Photo by Daniel Primerano]

UPDATE 9:49 a.m.: The southbound lanes are both shutdown and there is one way traffic control in the northbound lanes, according to the CHP Traffic Incident Information Page. The Incident Commander reported that the fire has been extinguished but that firefighters expect to be at the scene for about three hours. 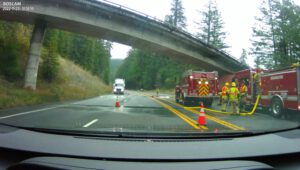 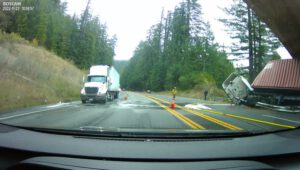 Don’t text and drive, or whatever the driver was doing.

Certainly no anomalies of any kind…

There is no such thing as being jinxed, or cursed, unusual magnetic fields, or anything else of any kind, that would increase the rate of incidents to an unnatural degree in any particular area…

It has its own nickname…

That area could use a whole bunch of sage smudging.

Not during fire season!! (those 9 months of the year)

🤔🧐There is definitely something very pesuliar going on…😁

No there isn’t.
Vehicles are controlled by an operator. To drive YOU start the engine, steer, and accelerate, or brake. The roadway is fairly passive: a smooth flat clearing in the forest that extends to your destination. Is the freeway haunted, or are all these vehicles possessed by partially sentient mammals?

Have you considered lasers? Equally plausible.

WOW! That semi really took a hit after colliding with the overpass. I am glad the driver only had minor injuries. That accident could have easily killed him. The overpass tapers down on his side of the highway. The other side is higher and would have probably given him enough room to miss the overpass. Were the two vehicles on the tow truck involved in the accident?

Glad to hear the driver is safe.

Every time I have driven that stretch of 101 over the decades, I have noticed the distinctive taper/angles/pitch of that overpass. Like an optical illusion. I suspected that at some point, someone would miscalculate and hit a support or the overpass itself. Concrete is exceedingly unforgiving and I’d figure that the driver is fortunate not to be in worse condition.

As a former owner/operator of class 8 tractors and semi-trailers I’d like to see reporting of the load/freight and style of trailer, e.g. dry van, flat bed, reefer, container, etc. Looks like the conventional tractor w/sleeper here is pulling a container, what we used to call a ‘pig’. Wonder what was inside and where it was to be delivered. Glad to hear the driver is OK and there were no passengers or a co-driver in the sleeper. Be interested to hear the cause of this crash.

When the CHP completes its likely thorough investigation, their work product will be fully accessible as it will be public record. Most or all of your curiosities covered.

Just drove by around 6:00 they were still recovering the semi. The trailer was opened up and they were emptying stacks of recycled paper or something of that paper nature into a huge trash container.

What difficulties for firemen?
If that’s difficult for the firefighter’s explains why everything is on fire 6 months of the year

Being a firefighter is a dangerous job, this type of accident is very hazardous. They likely had to wear breathing apparatus just to get close enough to put out the fire. Just wearing the heavy gear and pulling hoses is not easy stuff. Also Calfire and all local Departments did a great job this fire season!

A hose from a fire truck spray’s pretty far and foam they use is pretty good at putting out fire. Don’t need a bunch of hose when they can drive the truck up to the fire. As far as the summer goes you obviously don’t have a house in willow creek. They moved in and took over the town and blocked half the population from getting home for three weeks because at the time there was nothing else going on. Fire for profit is real

If you do have a house in Willow creek, it may be because firefighters were there and put the fire out. Can you describe how firefighters were able to initiate lightning strikes for profit? How much did you pay personally for their firefighting services?

If you’re such hot shit why don’t you volunteer and show them how it’s done?

I wonder if the bridge sustained any damage?

I drove by this when it first happened, before LEO on scene, watching others help driver out of the cab. Drove back by 11 hours later and it appeared more vehicles had been involved than the singular truck I saw in the morning. But it was dark and I was trying to keep my eyes on the road.. was there further accident or was the huge mess that spread far more than the original truck just from the original AM accident?

I just soldiered through a bought of “upper GI covid&#...

I was just thinking about all the unlawful things these 2 id...

‘The Pressure Is the Point’: The Institute for Justice Has Filed an Amended Complaint for the Lawsuit Against the Humboldt County Cannabis Abatement Program

Dead horse, too little to late.

Weren’t you called out for accusing St. Joe nurses for...

Thank you for telling me what I think..