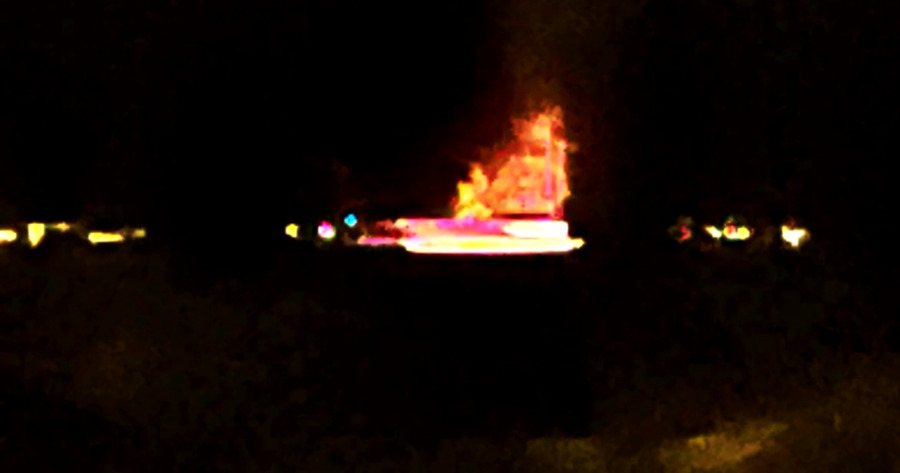 Lights from multiple law enforcement vehicles and a suspect vehicle on Hwy 101 as seen from across the river. [Photo from a local resident]

Giving OJ Simpson’s pursuit a run for slowest ever, a driver fled law enforcement headed southbound on Hwy 101 for over 22 miles at speeds that never topped 40 mph and often were less than 20 mph. A spike strip finally disabled the vehicle and officers arrested Ginger Porter for a DUI.

According to California Highway Patrol Officer Jonathan Clevenger, the incident began with a call reporting a disabled vehicle.

The CHP CAD pages show that a passing motorist found the vehicle in the number 2 lane of Hwy 101 near Redcrest. The female driver was outside of the car. The motorist pushed the vehicle out of the roadway.

Clevenger told us that when an officer arrived on scene around 8 p.m., the woman was able to get her vehicle going. “While interacting with the motorist which included the driver’s demeanor, no odor of alcohol and no symptoms of alcohol intoxication were observed,” he explained.

However, when following the woman southbound on Hwy 101, Clevenger said, “the officer observed the vehicle cross over the double yellow lines. The officer activated his lights to conduct an enforcement stop. The driver failed to yield and continued south in southbound lane for 22 miles at slow speeds.”

Eventually, around 10 p.m., Clevenger explained, “An officer deployed a spike strip which was successful and the vehicle came to stop near the French Road offramp. The driver was then removed from the vehicle and placed into custody and, upon further evaluation by officer with a higher level of drug recognition, the driving observation by the officers, and the complete totality of the circumstances, the driver was determined to be under the influence of drugs and booked into the Humboldt County jail.”

Guest
Frank Pembleton
Reply to  NoBody

Love that song. Had the 8-track! Foghat!

Was it her first time eating gummy’s?

Could that really happen to someone who tries gummies? Are they that potent? I have not done that so I don’t know what the effects would be.

Oh yeah. Eating goodies can catch up. Best when eaten in last evening for sleep

A wise officer would take her straight to a doctor, she could be two steps away from a diabetic coma. Diabetic symptoms are too often overlooked.

Good call! My old man was diabetic and the low blood sugar can wreck your judgement. Diabetics can slide into it w/o realizing and then need help. I always carry bread or crackers and some quick sugar candy for those folks because of what I learned at home.

Under those conditions they are always cleared through the ER prior to booking.

Under what conditions, specifically?

All’s well that ends well. She was temporarily removed from society to a safe space and she will need four new tires. Go with Dick Cepek Extreme Terrain next time.