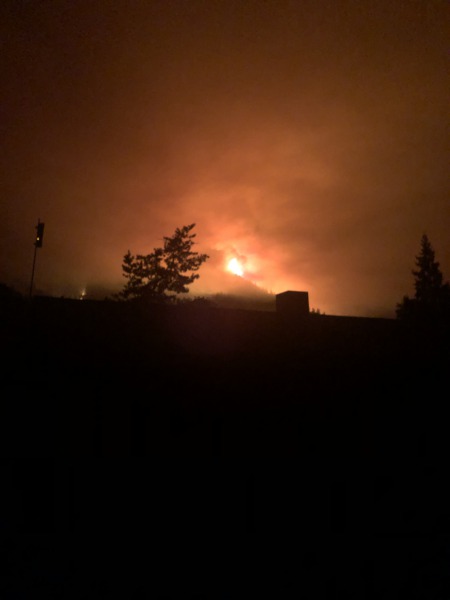 We’ve added updates in green to the Evacuation section.

Multiple homes in the tiny communities of Willow Creek and Salyer are once again threatened by wildfire after lightning battered the hills around them early yesterday morning. The Humboldt County Sheriff’s Department has issued evacuation orders and warnings. The Trinity County Sheriff’s Department has issued evacuation warnings.

The Federal Forest Service has unified command over the lightning fires. The Six Rivers Lightning Complex, as the multiple fires are now called, is estimated to be a total of 521 acres (though that may be very conservative) and is considered 0% contained (even though individual fires may have been contained), according to the Northern California Geographic Coordination Center at 7:15 this morning.

The Center reports, and residents there tell us, there has been extreme fire behavior on these fires. Basho Watson Parks, the Executive Director of the Lower Trinity Prescribed Burn Association and Owner/Op at Adaptive Forestry Solutions, gave us quick and unofficial view of the fires. We combined that with information from Six National Forest below. (See overview map in Map section.)

The Waterman Fire (sometimes called the Boatman Fire) and Cedar Fire is creeping. The fuels in that area were greatly reduced last year by a program and that may be helping. The Waterman is about 75 to 80 acres. 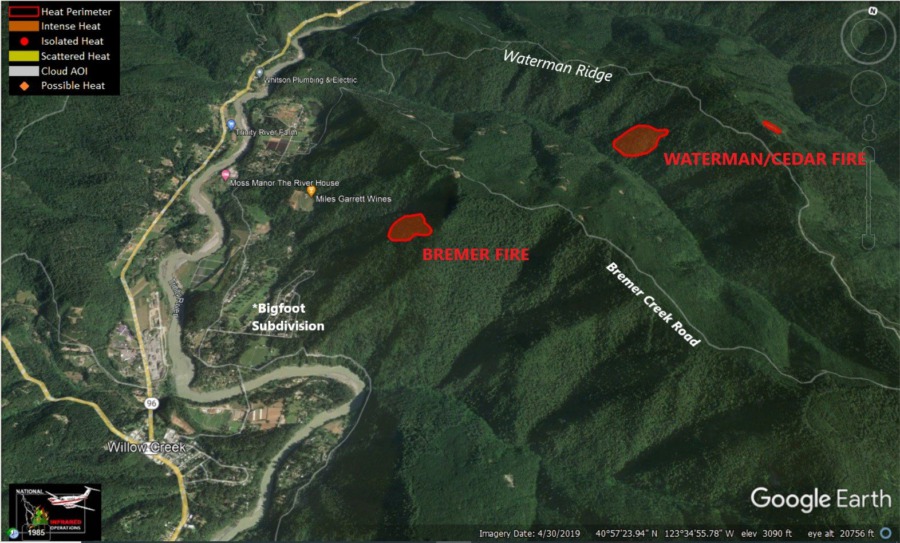 The Bremer Fire was relatively calm overnight and is about 15 acres.

The Bravo Fire is burning up the Hutson Creek drainage and is very close to the Campbell Fire. 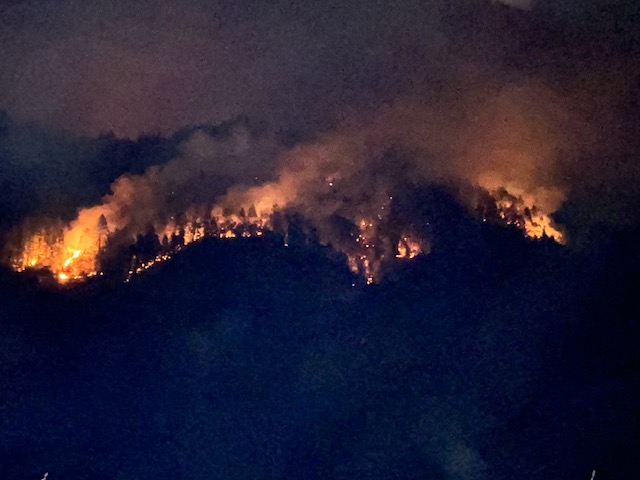 The Campbell Fire rolled over Campbell Ridge last night and expanded towards the Bravo Fire. Six Rivers National Forest says that it is approximately 100 acres. 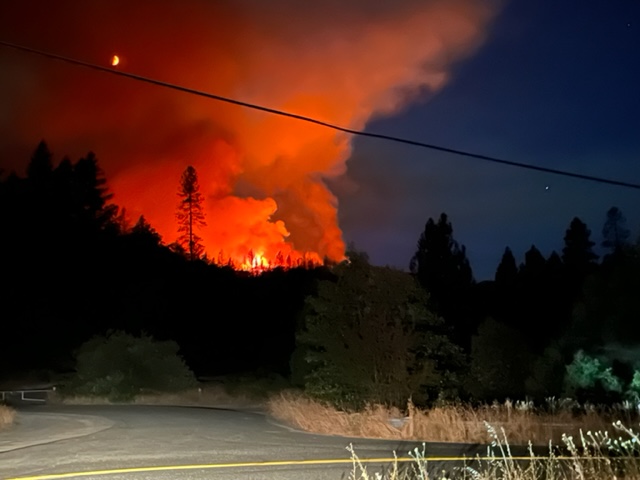 The Friday Fire took off and residents fled from the area. No acreage has been given on it.

The Charlie Fire is contained though still smoking.

The Oak Fire as seen yesterday [Filmed by Nicholas Holliday]

The Oak Knob Fire (AKA the Oak Fire) is burning hard and is believed to be approximately 200 acres.

The Prairie Fire is contained.

We’ve gathered the most important information about these Lightning Fires and organized it below for our readers.

According the the National Weather Service, Willow Creek will be “Sunny, with a high near 93. Light north northwest wind becoming north 5 to 10 mph in the afternoon.” Expect smoke and haze in the late morning and afternoon.

According to the Trinity County Office of Emergency Services,

Hwy 299 is still open. Visit QuickMap for the latest information on State Highways.

The following roads into evacuation zones have been closed. Residents may still use these roads to travel out of evacuation order zones: 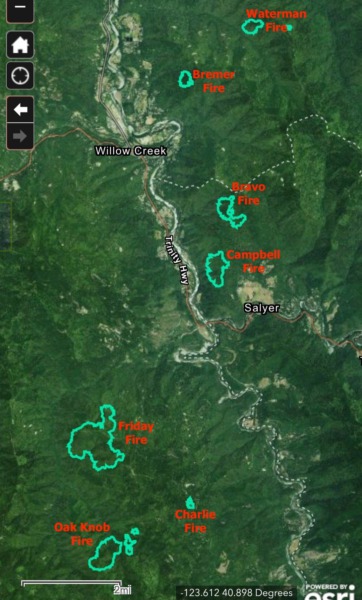 A Firis Map with notations by Basho Parks.

Always check ZoneHaven for the latest information. If you are unsure what zone you are in, on the top left hand corner is a place to put your address. 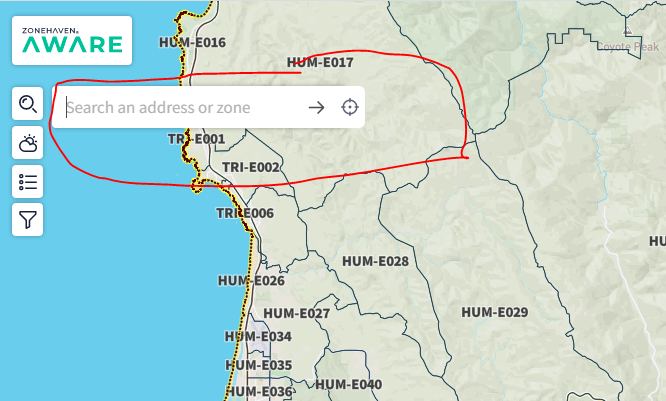 The ZoneHaven address bar is circled in red. 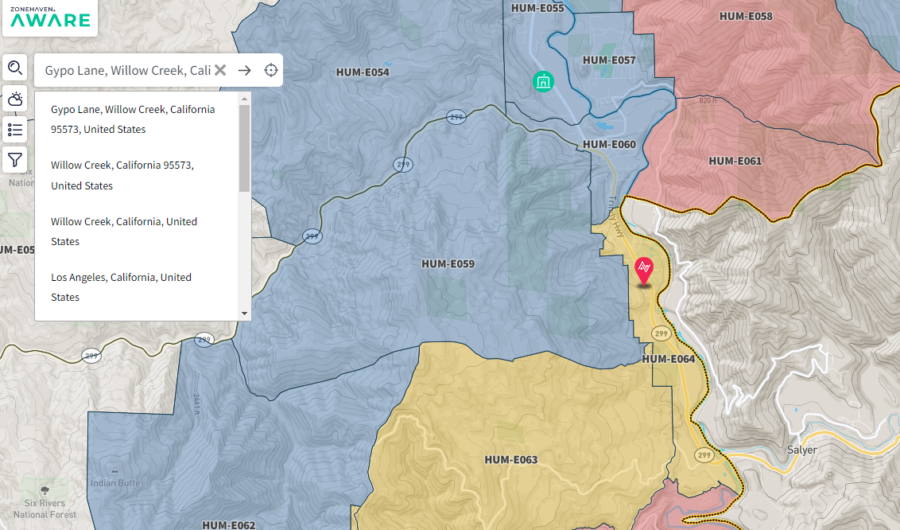 Once the arrow is clicked, a red marker shows your zone.

The Humboldt County Office of Emergency Services is not currently accepting donations. To volunteer or donate to assist our community, please contact:

Per the Trinity County Office of Emergency Services:

Per the Trinity County Sheriff’s Office an EVACUATION ORDER is being issued for the following areas; Salyer Loop down to the bridge at Highway 299, Salyer Heights, Orchard Lane, and Campbell Ridge Road. Please use caution while evacuating, safety personnel and vehicles will be in the area…Evacuation Center is at Trinity Valley Elementary School 730 N Highway 96 Willow Creek, CA 95573

Previous information that has been superseded

Red zones are Evacuation Order zones. EVACUATION ORDER: Immediate threat to life. This is a lawful order to leave now. The area is lawfully closed to public access.

Yellow zones are Evacuation Warning zones. EVACUATION WARNING: Potential threat to life and/or property. Those who require additional time to evacuate, and those with pets and livestock should leave now.

Blue zones are advisory zones. Be aware that wildfires are occurring in the area.

Thanks Kym! You rock!

Yep, and once again some great and detailed information..

Here is a link to help you find your property’s evacuation zone in Trinity County:
https://arcg.is/1DGeCa0