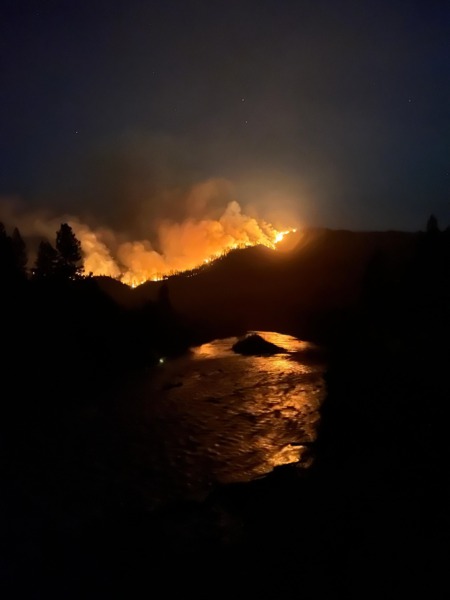 The McKinney Fire as seen from the bridge at Walker Rd and Hwy 96 looking southeast into Div D. (InciWeb/Los Angeles County Fire/Kristian Litz)

The McKinney Fire (now 59,636 acres, and 10% contained), the Yeti Fire Complex (now 6,436 acres and 0% contained) and number of smaller but still significant fires are burning in Siskiyou County. This has been brutal on the county. Four people died in the McKinney Fire–more than than all the deaths from California wildfires in 2021. Hundreds of main structures and outbuildings have been lost in the last week. Thousands are evacuated from their homes.

…On Friday the McKinney Fire stole four lives. They were our colleagues, our neighbors and our friends. Compounding the tragedy, an estimated one hundred structures were destroyed, along with 200 outbuildings, devastating the community of Klamath River. Our county and our communities cannot tolerate another such loss.

Over the past few operational shifts, the Yeti fire has pressed closer to the downriver communities of Seiad, Fort Goff, and Thompson, threatening 267 homes. Beyond these vulnerable communities lies Happy Camp with 822 homes, which lost more than 200 homes just two summers ago.

A group of nine fire and line leaders with a combined 154 years of experience on the Klamath National Forest (and considerably more fire experience beyond that…but those years just working on the Klamath – I brought down the average with just two years here!) came together to strategize how we could prevent the Yeti fire from impacting Seiad. Due to the current fire activity we are seeing on the Yeti, we are extremely concerned about a slope reversal and anticipate it happening quite soon. Provided we get clear air, our intent at dusk is to run a thin line of fire down the ridges at the bend of the river at Seiad and allow it to back down the ridge.

We’ve gathered the most important information about the McKinney Fire and organized it below for our readers.

Information from a Klamath National Forest press release this morning:

Firefighters continue to make great progress around the perimeter of the fire with opportunities to go direct and put in aggressive handline while working to tie-in those lines with adjacent divisions. Crews continue to get depth on containment lines on the west side of the fire.

The main tactic remains the same as fire personnel work to secure direct and indirect line construction on all sections of the fire. Weather is playing a major role in this fire’s behavior. Slope and terrain driven runs still influence rate of spread. Thunderstorms continue to creep into the forecast with isolated cells, potentially creating outflow winds that could produce erratic gusts up to 30 mph. Contingency lines from bulldozers are in place around much of the fire’s perimeter should the firefighters’ lines not hold, in order to protect the communities at risk. Flanking and backing continue with the weather and terrain driven fire behavior, especially in the Mill Creek area.

Mop-up operations have been initiated along Walker Bridge and other communities along Highway 96 from Highway 263 junction to Seiad, east towards Yreka, Scott Bar, and Horse Creek on the west. Protection of human life and the safety of the firefighters remains the main priority.

Yesterday in the early afternoon, the Smokey Fire ignited just north of the McKinney Fire, about 2 miles south of the Oregon border. With resources on the McKinney Fire so close by, firefighters were able to quickly respond for initial attack on the 34-acre spread. Firefighters have control line and hose-lays completely around it and aircraft continue to be utilized in the area as needed.

Hot and dry mostly but with a slight chance of thundershowers. 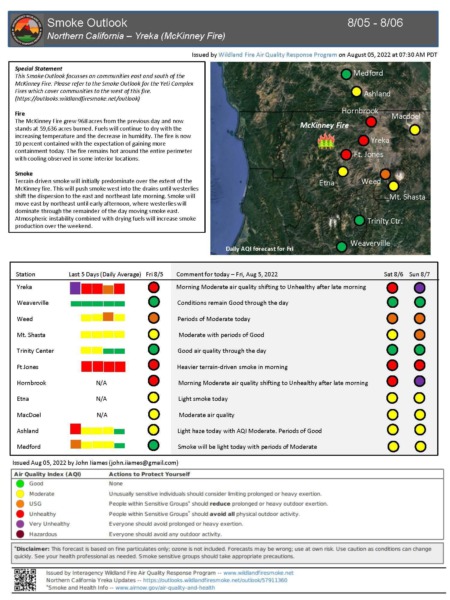 According to InciWeb, “A portion of Highway 96 is closed due to the fire.  Prior to traveling, please check CalTrans Road Conditions at https://roads.dot.ca.gov/ for the most current road conditions.”

Multiple Evacuation orders and warnings remain in effect. For current updates on evacuations, visit the Facebook pages of the Siskiyou County Sheriff’s Office and Siskiyou County Office of Emergency Services. Additional evacuation information and map can be found on the Zonehaven website. A shelter has been established at the Weed Community Center, 161 E Lincoln Ave., Weed, CA 96094. 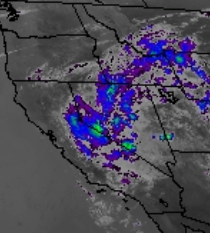