This is a press release from the Hoopa Valley Tribal Police. The information has not been proven in a court of law and any individuals described should be presumed innocent until proven guilty:

On 06/15/22 at approximately 2:10 am, Officers were dispatched to a report of a truck partially hanging off a bridge on Shoemaker Road and Telescope Road.

Two individuals were found in the truck and were sleeping as they could be heard snoring. It did not appear that they were injured or needed medical attention. A strong odor of an alcoholic beverage was coming from the cab of the truck where the two men were asleep. The driver was later identified as (S) Marty Lamebear, who was hunched over the center console and appeared to be sleeping.

The other individual was leaning back in the passenger seat and also appeared to be sleeping.

Both parties were awaken and an investigation was conducted. Both individuals related that they had been drinking because of the recent death of a close family member. Neither individual could explain how the vehicle came to be parked with it half way over the edge of the bridge.

Lamebear’s speech was slurred and difficult to understand. When Lamebear spoke, the strong odor of an alcoholic beverage came from his breath. Lamebear had an unsteady gate and had red glossy eyes.

An unopened blue Budweiser can was located in the panel door of the driver’s side.

The Hoopa Valley Tribal Police need your help in fighting crime. Please contact the police and report any suspicious individuals and activity by calling 530-625-4202.

That lame beer guy has to be excused. He has had difficulties in his life. B4 you judge him for his behavior remember you dont know what hes gone thru. That cop should be DE funded. For interfering with his sleep

Maybe They were honoring a homie that died in a drunken collision killing innocent women children and livestock? Then this arrogant cop harasses them becus of their race. Its outrageous!!! D runk. L ives. M atter!

They should have pushed the pu the rest of the way off. Poor darlings, can’t handle a little problem like real men?

Toss a road flare in between them just to see their reaction ? There ya go thats an urgent problem drink yur way outa that!!!!

Never get tired of these heart warming stories first thing in the morning. What love for family. Makes me giddy.

Normally when people are arrested for drunk driving they are arrested and and taken to jail. There they are given a blood, breath or urine test Why was he released on a citation? Is CHP trying to save gas by not transporting him to Eureka?

This was tribal police, not chp

Often times there’s more to the story then just the title.

Cited and released? Damn! Mr Lamebear should buy a lottery ticket. Anyone else would’ve been arrested and the vehicle impounded. It was certainly his lucky day!

Your not inappropriately speculating about criminal behavior are you?

This is perfectly normal…

Happens all the time…

You shouldn’t really jump to such hasty conclusions..

You’re traumatizing the family with your wild conjecture!….

He has friends, you know…

Really? Or are you just trying to be sarcastic? Obviously, too wasted to function.

Cited and released? How come? I’ve never heard of that before. One of the tribal police a relative or what?
Death of a family member didn’t work for the Arcata mayor. Why is it going on here? This kind of shit is why the res gets a bad name. Even with the CHP involved the place is lawless.

He wasn’t driving when they got there.

Apparently you need TWO wheels hanging off the bridge to get arrested. One wheel and it’s just a ticket. Luckybear!

Pictures, or it didn’t happen. 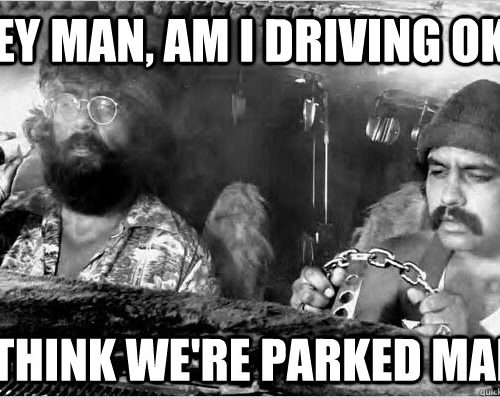