Press release from the City of Eureka: 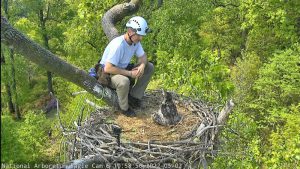 Jim Campbell-Spickler, director of the City of Eureka’s Sequoia Park Zoo, has decades of experience climbing trees and researching the amazing animals and incredible ecosystems they support. His particular background as a wildlife biologist and tree-climbing expert makes Campbell-Spickler uniquely qualified to manage Sequoia Park Zoo, the only zoo situated in a coast redwood grove. These same qualifications, coupled with his renowned reputation as an “eagle whisperer”, afforded Campbell-Spickler the recent opportunity to assist with the banding of a 6-week-old bald eagle chick at the National Arboretum in Washington, D.C.

, Campbell-Spickler scaled the 80-foot poplar tree, gently placed the young bird in a special eagle bag, and then carried it to the ground for an overall health assessment by experts with the U.S. Fish and Wildlife Service and the D.C. Department of Energy and Environment. This routine process included collecting beak and foot measurements, a blood draw, a feather sample, and the placement of an identification band. The eaglet, known as DC9, was then safely returned to the nest by Campbell-Spickler.

Scientific processes like this assessment and banding allow experts to monitor the health of individual animals, as well as collect long-term data about a species. Ankle bands allow birds like DC9 to be identified and tracked, which aids in the mapping of migratory routes, territories, and flight patterns. Small blood and feather samples provide invaluable insight into the overall health of local watersheds and ecosystems, especially urban rivers and human-impacted waterways.

Bald eagles feed primarily from water sources and will prey on fish, waterfowl, and other aquatic-adjacent animals. Toxic organochlorides, lead, rodenticides, and other pollutants in the environment are found amplified in the tissues of predatory birds as they feed from the contaminated ecosystem. Eaglets depend on their parents to bring them food and are usually fed from one source within their territory. Testing tissue from young birds like DC9 offers scientists the opportunity to assess environmental toxins and monitor the overall health of the local watershed.

Keen observers of the National Arboretum’s eagle cameras were treated to a live-streamed view of Campbell-Spickler as he ascended the tree and entered the nest. Campbell-Spickler calmly observed the eaglet for signs of distress or discomfort while evaluating the massive structure, which featured an impressive network of woven branches and a fresh fish carcass. Eagle parents will often return to the same nest year after year, and some eagles’ nests can grow to over 1,500 pounds as the pair continues to add and renovate. When satisfied with the eaglet’s behavior and curious reaction, Campbell-Spickler gently placed DC9 in a special eagle bag and descended to solid ground for the official assessment and banding.

DC9 hatched in late March to parent eagles affectionately known as Mr. President and Lady of the United States, or Lotus. Mr. President and Lotus are nesting in a tulip poplar tree at the United States National Arboretum, operated by the United States Department of Agriculture. This exclusive banding opportunity is a result of the collaborative effort of government agencies and National Geographic, which was on location to film the process. After the assessment, DC9 was quickly returned to the nest, and the parents arrived to feed the eaglet shortly thereafter. 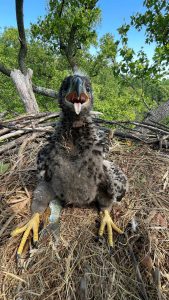 “It’s amazing to me how fast they grow. In a couple weeks DC9 will be flying over our nation’s Capital, learning how to hunt and provide for himself,” Campbell-Spickler explains.

Campbell-Spickler is grateful for the ability to share his expertise locally and nationally, and seeks to highlight the importance of these scientific assessments.

“It was an honor to climb the nest tree and work with this famous little eaglet,” Campbell-Spickler said. “We’re waiting on lab results, but our initial health assessment and detailed measurements suggest that we have a happy and healthy baby boy!”

You can check in on DC9 at the National Arboretum Eagle Cam live stream here:

Sequoia Park Zoo currently cares for two bald eagles, Juneau and Cheyenne, who were injured in the wild and are unable to be released. These special animals serve as ambassadors for their species and educate visitors about caring for wildlife and wild places. Sequoia Park Zoo has the honorable distinction of being the oldest zoo in California and is proudly accredited by the Association of Zoos & Aquariums (AZA). It was founded in 1907 and continues to thrive with support from the City of Eureka, the Sequoia Park Zoo Foundation, and the generosity of the local Humboldt County community.

🤞🙏 DC9! Stay away from this:
Wind energy company kills 150 eagles in US, pleads guilty
By MATTHEW BROWN
April 6, 2022
NextEra Energy subsidiary ESI Energy pleaded guilty Tuesday, April 6, 2022, to three counts of violating the Migratory Bird Treaty Act during a court appearance in Cheyenne, Wyoming. It was charged criminally in the deaths of nine eagles at three wind farms in Wyoming and New Mexico. (Spenser Heaps/The Deseret News via AP, File)
BILLINGS, Mont. (AP) — A subsidiary of one of the largest U.S. providers of renewable energy pleaded guilty to criminal charges and was ordered to pay over $8 million in fines and restitution after at least 150 eagles were killed at its wind farms in eight states, federal prosecutors said Wednesday.

Great information about this effort and an explanation of why such intrusion into a wild animal nest and assessment of a baby bald eagle is being conducted. Monitoring the health of the ecosystems and watersheds is most important. I am curious as to why the Sequoia Zoo finds it important to build a bear and coyote exhibit for public display when these wild animals definitely are adverse to both humans and captivity. If Sequoia Zoo puts animals on display for monetary purposes rather than considering the welfare of the individual animals, I am very concerned. If the bears and coyotes needing rehabilitation are being put on display for families and children to “see” up close and in person, it is an antiquated and less humane way to treat these large predator mammals and the wrong way to educate future generations about these creatures that live among us in the urban wildland interface.