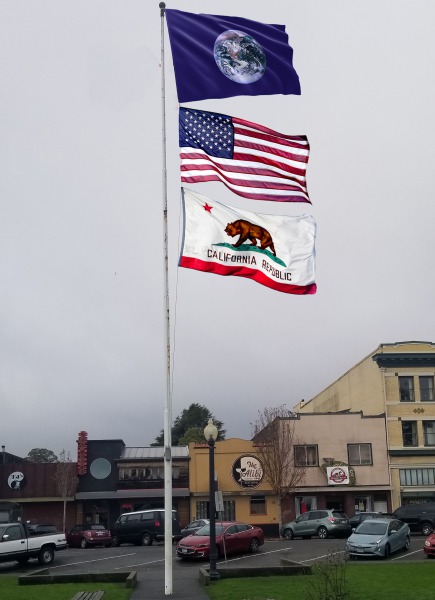 Plaza flags with the Earth flag on top. [Photo provided by initiative supporters]

Press release from Put the Earth on Top initiative supporters:

Put the Earth on Top initiative qualifies for November ballot in Arcata.

The Humboldt County Elections Department informed us yesterday that we had gathered a sufficient number of valid signatures on our petition to qualify for the November ballot in Arcata.

The initiative directs the City of Arcata to fly the Earth flag at the top of all city-owned flagpoles, above the US and California flags.

We need to pay more attention to the health of the Earth, because we can only have a healthy nation if we have a healthy Earth. Excess nationalism, corporate greed, and rampant militarism threaten all life on Earth, both with unchecked global warming, and with the risk of nuclear war. By flying the Earth flag at the top, we make a strong statement that caring for the Earth is our first priority.

Volunteers gathered signatures for the ballot initiative between March 6 and April 26, when the petitions were turned in. The Humboldt County elections office reviewed the petition forms and found 1381 valid signatures. This is significantly more than the required 1137, which represents 10% of Arcata registered voters.

The measure will appear on an upcoming Arcata City Council agenda, where the council will have the option of approving it directly or placing it on the November ballot. Supporters are urging the council to let the voters decide, so it will be clear that the people of Arcata have chosen to Put the Earth on Top.

Text of the ballot initiative:

The people of the City of Arcata do ordain as follows:

It shall be the official policy of the City of Arcata to fly the Earth flag at the top of all city-owned flagpoles, above the flag of the United States of America and the California flag, and any other flags that the city may choose to display.

For the purpose of this measure, the Earth Flag shall be defined as the flag featuring the “Blue Marble” image of the Earth, photographed from the Apollo 17 spacecraft, in 1972.

What a bunch of bigots.

No hammer and sickle? WTF?

“I pledge allegiance to the New World Order, one government, under Klaus, divisible by race and class, with starvation and poverty for all.”

Who are you quoting?

“You will own nothing and you will be happy.”

This Is My Name
Reply to  Winston1984

a guest of a guest
Reply to  Winston1984

(I apologize for the punctuation. College just didn’t tickle my/ the Truth,
more sales pitch for a ride on a sinking ship than eliciting a fire within.)

Sounds like those proposing this stupidity aren’t very well versed in US Flag display rules. I believe this proposal to be unamerican, if not anti American. Of course, that’s nothing new for Arcata, or Humboldt either.

Meh. Flag “rules” went out the window a long time ago. Personally I think I quit giving a damn at all when American flag bikinis and undershorts came around.

Also, that “thin blue line flag”. And protestors at a certain event I won’t mention wearing the American like a cape, or in the case of Kid Rock, actually cutting a hole in one and wearing it like a poncho.

Second also, getting one’s American flag underwear in a bunch over a piece of fabric has always struck me as fetishizing. Soldiers, sailors and Marines don’t die for the flag, or even make an oath to it.

Tell that to these guys. 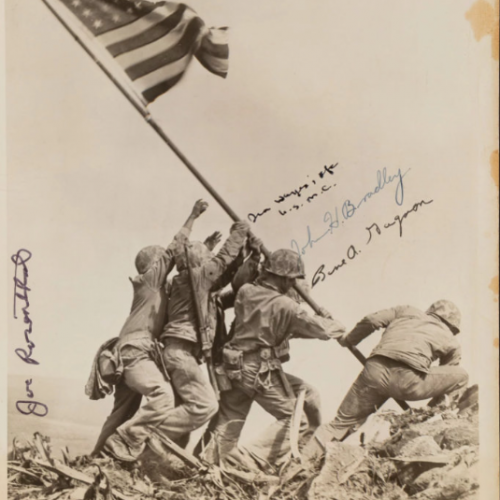 I know all about those guys. My son is a 4th generation Marine (his father a Vietnam vet, his grandfather and great grandfather in WW2, his grandfather was also in the Korean War). Funny story. The famous pic was the second version, more stage set. The first, actual flag raising used a smaller flag. Also sadly, three in the very iconic (but staged) picture died later in the battle.

So, those very brave soldiers who fought and many died on Iwo Jima weren’t fighting for the flag.

Yup, although it made me want to vomit when trump fondled it.

Anti-American? Maybe you are anti-earth. In any case, they are pieces of cloth, probably made in China. Unless we actually make Mother Earth a priority, this is all just posturing.

So… let me see if I’ve got this right:
The Federal Government is overstepping its role and needs to return power to local citizens but,
Local citizens have no right to pass policies that contradict Federal traditions.
Did I get it right?

This is what our tax dollars pay for

How much, exactly, do you think it costs to switch the order of the flags?

The waste of time,( in which salaries are paid), lack of focus on serious concerns, that’s the cost .

At least you get it

Symbolically, that the earth flag would be ‘above’ all else can help remind US of that! Raising people’s awareness that the sanctity of the earth is WAY more important than any country, state, group, etc., will be invaluable. We ALL must wake up and face that REALITY, the relatively balanced eco-system, that has allowed humans to thrive, will be forever changed…. and NOT in ‘our’ favor.
Kudos to DM and those who supported this effort!

Slink
Reply to  Ben Round

I’m torn. What they are proposing is totally illegal and a blatant disrespect of the American Flag. But you’re not wrong when you suggest putting the Earth above country might change perceptions. It’s totally symbolic, but humans respond to symbols.

rollin
Reply to  Ben Round

“the relatively balanced eco-system, that has allowed humans to thrive, will be forever changed…. and NOT in ‘our’ favor.”

Corporate Serfdom
Reply to  Ben Round

Tell that to the corporation that puts paper straws in plastic bags.

Some of us just recognize virtue signalling morons who drive their cars, instead of riding their bikes, who think taking a vaccine is a pass for poor choices, that am abortion is easier than prevention

By all means fly your flag, but don’t think being a truckatarian isn’t obvious.

Then stop being truckatarians, and get a program to make sure you can feed your family locally, otherwise you are all bark , and no bite.

If we put the earth first the whole world would benefit.
IMAGINE

Yeah. I have on occasion pointed out to people ranting about “globalism” that the planet is just a tiny speck in the universe. But it is the only speck we really have. All of us.

Perspective is hard I guess.

Then let the earth rid itself of the parasites, those who have no idea when to stop eating more than is necessary.

American Flag should always fly highest. America is not politics, America is bigger than that.

Only in Arcata. That’s why we wont spend a dime or ever support any business there. Stupid ignorant town full of rules not worth supporting

🙄 We have sooooooo many other millions of issues to address Arcata, like,

My grandfather on Dad’s side, Lieutenant US Army Engineer, KIA Germany. Fighting for the Values the Flag represents. The Flag has been definitely used in many ways beyond its original purpose. Best to keep it simple and see it there for all Americans and not used for purposes like this or for politicians wrapping themselves in it.

Just because we are all blessed to be along for the ride on our precious spaceship, planet Earth, does not mean we should subsume our Constitution to the malign authoritarianism of a nefarious globalist order—salivating as it schemes to enslave humanity for all-time.

Better that we restore Constitutional rule at home and then perhaps other countries might likewise choose to live in accordance with We the People’s inalienable, God-given rights to Life, Liberty and the Pursuit of Happiness.

Yeah, most M-class planets look like that…I’m not sure using that NASA image would be legal for a city to ordain.