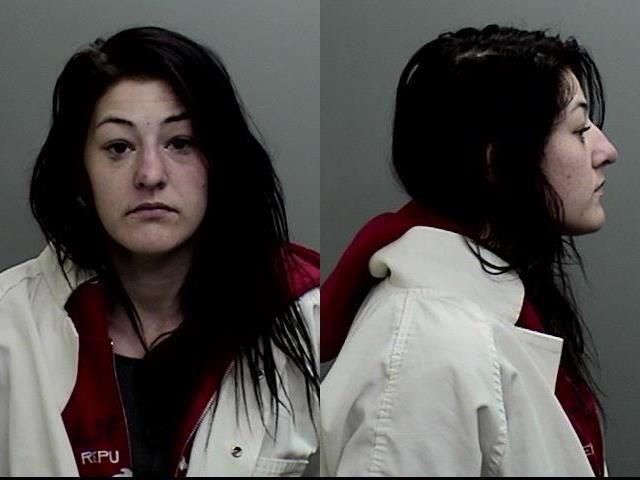 On 05-06-2022 the Mendocino County Sheriff’s Office received a call about a possible assault which occurred in the 32000 block of Shimmins Ridge Road in Willits, California.

The Deputies learned that at approximately 5:05 PM a 33 year-old adult female [from Garberville] was parked in a vehicle in the 32000 block of Shimmins Ridge, when Tesla Hencz [age 27 from Laytonville], drove past. Deputies believed the adult female and Hencz had been arguing because they were both romantically dating the same person.

Hencz then left the area towards the direction of Highway 162. Deputies checked the area but did not locate Hencz or her vehicle and a BOLO (Be-On-The-Look-Out) was issued to local law enforcement agencies.

On 05-07-2022 a Mendocino County Sheriff’s Deputy noticed Hencz driving her vehicle in the Laytonville area.

The Deputy conducted a traffic stop on Hencz and she was subsequently arrested for assault with a deadly weapon (245(A)(2) PC), vandalism (594(A)(1)) PC) and an active misdemeanor warrant.

Deputies found a spent .22 caliber shell casing inside the vehicle. Deputies further noticed Hencz’s vehicle had damage to the front of the vehicle consistent with the reported incident.

Hencz was booked into the Mendocino County Jail where she was to be held in lieu of $32,500.00 bail.

A single gun shot to the tire, from inside her car, probably with her left, non dominant hand. Kym, can you do a follow-up on this please? If she’s out in a couple days I’d like to take her out to dinner.

” Hell Yeah you stay away from my man!!”

Mountain justice 101. Who gets the guy?

He must be quite a catch.

It has to be PMS gone bad.

Tesla can we go out? I love you so much!!

I’ve done this. Was romantically involved w a woman and found she was rolling in the hay w our common friend. I lost my kool and went to his house when she was there. Turned off his power. Entered the home and unloaded 6 rounds in his bedroom. Then I slashed tires and took a baseball bat to his car. I stopped paying for my girls lifestyle costs and her car.

I never heard from either kne of them after that. NEver wondered why.

Lol you sound like someone fun to hang out with

That’s not what she said!

Bug on a Windshield
Reply to  Liberty Biberty

You apparently made an impression never hearing from either again!

Garberville and Laytonville: Two towns that deserve each other.

Why was my comment deleted. Absolutely nothing wrong with it??

Not Blind
Reply to  Nick

Have had some of mine go missing as well. What gives?

A friend caught her husband in bed in flagrante delicto with another guy I asked her who was pitcher and who was catcher. Also what sort of sound they were making. Theyre no longer married. Were still friends. Amazing…

I know someone else who caught her husband in bed in flagrante delicto with her own mother. This was apparently rather upsetting to the daughter.

Humans are pretty foul and disgusting.

How immature. Very kindergarten. No one is worth fighting over. Period. Grow the fuck up. Recognize freedom of choice works both ways. I sure wouldn’t want to be with anyone who really doesn’t want to be with me! Life is so much better when affection and respect is mutual.

I can only image what the dude looks like.

A gal from G-ville and a gal from L-ville fighting over a dude? He must have teeth, and could still speak hillbilly.

This incident lends credence to the old proverb…

Except maybe two women scorned. Especially if they gang up on the guy.

“…Deputies learned that… a 33 year-old adult female…, when Tesla Hencz [age 27 from Laytonville], drove past…. Deputies believed the adult female and Hencz had been arguing….”

Apparently, according to MCSO, people are not adults until they are in their 30s.

Joe
Reply to  Bug on a Windshield