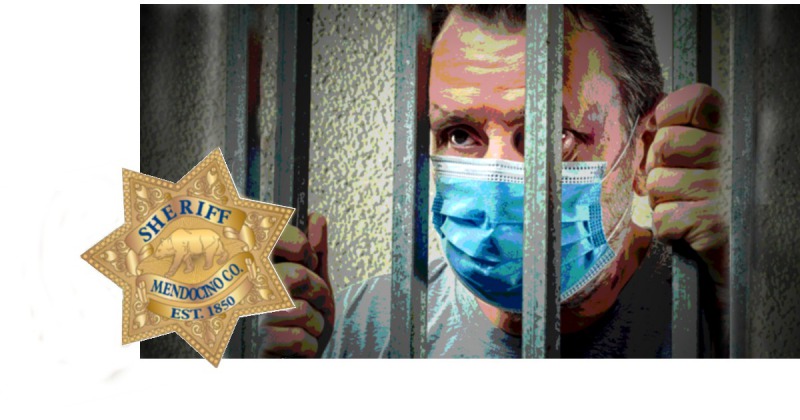 Press release from the County of Humboldt:

The Mendocino County Jail has had an outbreak of COVID-19 amongst the inmate population and staff. The Sheriff’s Office has continued to utilize personal protective equipment for jail staff as well as abided by all mandates and direction from the CDC, Cal OSHA and the Public Health Doctor.  Despite our best efforts, COVID-19 cases are on the rise in the jail.  Some of the difficulties in preventing the spread are the open-air design of the aging jail facility, the constant turnover of inmates in custody and the rise in COVID-positive arrestees being brought into the facility.

In the last two weeks, the jail has seen 62 cases of COVID-19 among the inmates.  Several inmates have recovered in custody while some others have been released by the courts and returned home to finish their isolation period.  The current number of cases in the jail is 45.

As part of the safety procedures to prevent the spread of COVID-19 in the jail, all incoming arrestees are tested upon entry into the facility.  Once booked into custody, arrestees are quarantined for 10-days.  The entire jail population is tested twice weekly. Staff members are likewise tested twice a week at the beginning and end of their workweek.

Inmates in affected areas are being quarantined in order to prevent further spread.  Some early releases of sentenced inmates who are approaching their release date have been done in order to decrease the jail population.  The jail is also continuing to cite out lower-risk offenders to control the population.

Jail staff has also been affected by the recent surge of COVID-19.  Since December 2021, 29 jail employees including correctional staff, support staff, nurses and administrative staff have tested positive.

To date, inmates and staff have reported only minor symptoms as a result of their COVID-19 exposure.

You may have heard that masks and vaccine mandates have been suddenly abandoned in England. THIS WAS DUE TO A POLICE ISSUE AT THE JAILS AND POLICE STATIONS. concerned citizens relentlessly pressured local police across the country to go and arrest the real criminals- the maniacs pushing the insane totalitarian New World Order agenda of the Great Reset.

Everybody has Covid. This isn’t news. Thank god this pandemic crap will be over in a couple months

Liberty Biberty
Reply to  Mega me

A few more boosters should do it😂

Mendocino County Jail is a disgusting filthy place. There’s probably still DNA from inmates who have died in the cracks and crevices.

yes and inmates are the only citizens that are not required to wear masks and the “police” in care of these idiots have no right to make them comply. More games. Nice though the US is allowing illegal immigrants to vote and fly with nothing more than an arrest record.

Infact if you are going to let a lot of the people out of jail for free due to the flu, then just don’t arrest them in the first place. What you have done is forced someone to go to covid jail just to be let go after contamination…..

Jail isn’t supposed to be fun. Get back to work. The average grocery clerk is in far more danger than you. I don’t want to hear the boo hoo’s about jail – don’t get arrested then. It should be a deterrent.