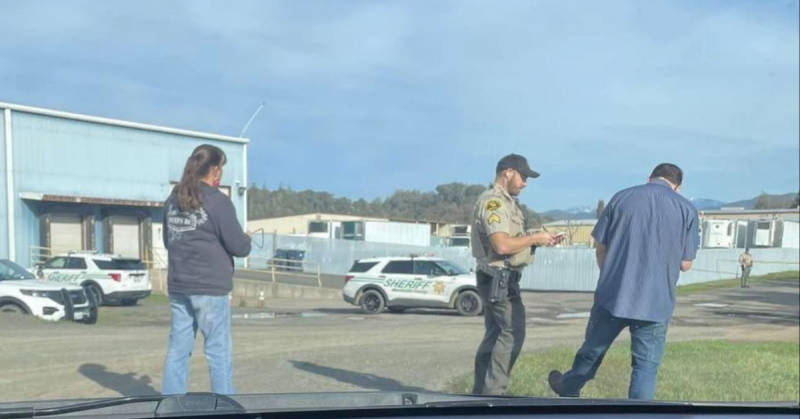 A deputy on the scene of the death investigation on Tuesday, January 11. [Picture provided by a Mendocino County Resident]

Little information was released that day, but today Mendocino County Sheriff’s Office Captain Greg Van Patten has confirmed the deceased was a female adult and the death is considered “suspicious.”

Christy Lane. That area you would have to know it. You don’t just stumble upon this location. It’s around a lot of businesses and kind of close to Parducci Winery. The road does make a loop and you could get back on the freeway easy maybe coming in from the Calpella side up State Street . Not really the kind of place that you would wander or stumble onto accidentally. Somebody’s got a connection, felt comfortable it is kind of far from law enforcement immediately noticing. There probably are quite a few cameras in the area. Terrible…just terrible. 💔

You have such a gift, and I think you need to focus on your talents, everyone gets tired of the pain from life’s trials. Please remember to light a candle, instead of cursing the darkness. You reminded me of a star athlete that everyone loves, then goes and cheap shots your opponent. Stay strong and true, and remember big kym momma is watching you. Peace and respect, just a reminder, when I was a young shit head on the dead lot, it was the hippy sisters from up yonder in your neck of the woods, that schooled the tour scum. Always righteous, with integrity, hence honey badgers. Don’t get tainted in these dark hours, for as my mom used to say, something about gaining the whole world but losing one soul. If you followed my crazy rants. I’d go nuts trying to save this forum, while losing my soul. Know I’m actually fighting the demons that lurk in me, hence saving the world via penance and sacrifice. Hope you realize it’s from the heart. And fellow brothers, I quit porn, weed, booze. Last vice sugar and coffee. It’s amazing the peace I feel, knowing I’m fighting for my own soul,… Read more »

Ukiah has not changed in over 40 years.

Its not really Oakie Flats thats more on Eastside Calpella Road. This is between the old ice house and Parducci on the west of “Frito Lay” businesspark..