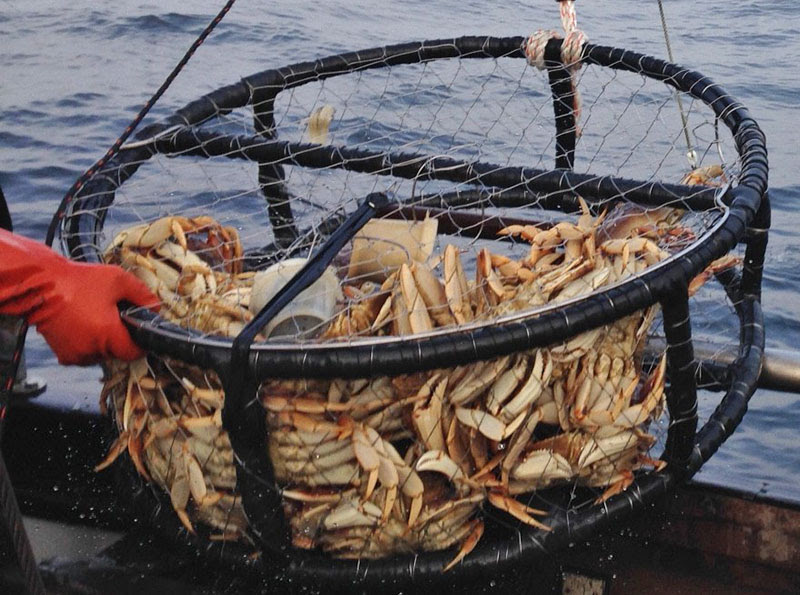 Crabs in a crab pot. [Photo from CDFW]

For the first time in years, the North Coast Commercial Crab Season will open on December 1st. In 2020, issues with domoic acid levels, migrating whales and price negotiations delayed the start of the season to early January 2021. But the stars have seemingly aligned with whale migration, price negotiations and “pretty much zero traces of domoic acid”, according to Harrison Ibach, the president of the Humboldt Fishermen’s Marketing Association in an interview graciously shared with us by Lauren Schmitt of KMUD News.

That, coupled with the lack of King and Opilio crab this year has helped raise the demand for Dungeness Crab. With the demand high, the fishermen were able to negotiate a decent price with processors, starting the season at $4.75 a pound, up about $2.00 per pound over last year.

All good news for local fishermen who are hopeful that the recent lulls of the industry will continue to rebound. “Last year was probably the worst year in many decades,” said Ibach, who is also the Captain of Fishing Vessel Oceana.

Although off to a good start, the risk of early closure of the traditionally long crab season looms. Last year the commercial dungeness crab season was cut short by six weeks due to whale and other marine-life entanglement risks, a worry for many people that rely on the dungeness crab fishery. Conservationists at heart, “the Dungeness Crab Fishery is a very well-managed, good, sustainable fishery,” said Ibach.

Whether the season will continue through June and into July of 2022 remains unknown, but for now, we celebrate. Crab pots are already in the water. The official start of the season commenced at midnight. Locals can get fresh, good crab from multiple boats at Woodley Island Marina today, Wednesday, December 1.

The number of whales that entangle in crab gear in this area is de minimus.

Such good news, and a much needed win for hard working fishermen.

[…] probably the worst year in many decades,” said Ibach, who is also the Captain of F/V  Oceana. >click to read< […]

Rejoice? Or re choice. Go veg !

“Pretty much zero traces ” (…of domoic acid) Wow that sounds super sciencey!! Meanwhile the Encyclopedia of Aquatic Life tells us that crabs feed off of dead and decaying matter they are known as professional garbage hunters. So naturally, eating scavengers is kind of like eating whatever is in your septic tank. Crustaceans like CRAB also have the highest risk of carrying parasites and accumulating xenoestrogen. (Xenoestrogenic chemicals are found in industry products like plastics as well as pesticides and dioxins. These contaminants are often found at the bottom level of the waterways where shellfish gather.) When scavengers like crab make meals out of dead, decaying material along with the abundant pathogenic viruses, heavy metals and nerve toxins found in our oceans, and we eat them — we are also eating all that they have eaten! Those heavy metals and PBCs may cause liver damage, nervous system disorders, and fetal damage, dioxins, also linked to cancer and death, radioactive substances like strontium 90 and other dangerous contaminants like cadmium, mercury poisoning, lead, chromium, and arsenic, which can cause health problems such as kidney damage, impaired mental development and cancer, high levels of mercury can lead to Alzheimer’s, Parkinson’s, autism, mercury… Read more »

The crabs are tested and safe for consumption. We had two crabs last night with garlic butter and a good chardonnay…

Angela Robinson(@arobbie1956)
Reply to  Rejoice? Or re choice. Go veg !

LOL. The deadliest thing about crab, is the loss of life for crabbers.

Also, “veg”, that little diatribe doesn’t help your cause at all. You know that old saying “You catch more flies with honey than vinegar.”

Not to mention there are more cases of bacterial infections or toxic poisoning with vegetables than meat. Or at least it seems to me as I eat more salads than steaks.

Yes, the vegetable recalls for e-coli and salmonella seem quite common. Just recently it was onions, if memory serves.

It happened famously with packaged-fresh veggies – salad mix and such – a few years back. Maybe things have improved since then, maybe not. Were the onions whole or packaged?

Quote from, I believe George Carlin, “What is it with these fucking vegetarians anyway? At least meat has a chance to get away.” You should see some of the “crap” they use to fertilize organic veggies.

Thanks for that. You must be a barrel of laughs at potlucks and family get togethers. Going to make toast instead of my favorite Christmas crustacean dinner this year.

My participation in feisty debates at a potluck is nothing but a cheap personal jab unrelated to the conversation, Kym can’t catch them all. But now that you bring it up those are all worked out in the jello wrestling pit. Want to have a go?

At the risk of opening up the theological discussion about whether Jesus fulfilled and preserved the Law, or did away with it, there is also historical basic for avoiding shellfish. ” And all that have not fins and scales in the seas, and in the rivers, of all that move in the waters, and of any living thing which is in the waters, they shall be an abomination unto you” – Leviticus 11:10″ From here.
https://thebiblediet.co/clean-or-unclean-food/

Everyone is so woke all into health, spirituality. and ” sustainable ” living until it comes to Christmas crab I guess. We all pick our poisons and deviations from.a moral walk. Considering the toxic nature of our ocean Crab are straight up are ew! I’ll avoid those risks and just slurp down the bowl of butter and garlic since that’s the main reason people eat crab anyway 😆.

Bug on a Windshield
Reply to  Rejoice? Or re choice. Go veg !

Yeah, I ate some bad fish once. A group of us were camping and surfing in Baja Norte, decades back. On the last day, as we rolled out, we stopped at a roadside taco cart. All but two of us had carne asada. A gal and I both got fish, followed by Montezuma’s once we got home. The gal took antibiotics. My Mom’s herbal remedies seemed to do nothing. After a few days, I took the friend’s leftover antibiotics and cleared right up.

My fault really. At 24, I was by no means a newbie to Mexico. I did not have the mayonnaise though, could’ve been worse.

David Corso
Reply to  Bug on a Windshield

Who ever says eating she’ll fish can hurt you is an idiot, just being in this world can do more damage than eating delicious crab or halibut,lingcod, canary,widows,cabizon ect all live on the bottom of the ocean,so stop the hating

Bug on a Windshield
Reply to  David Corso

You’re pointin’ the finger at the wrong guy, bucko!!

Mr Toure
Reply to  Bug on a Windshield

Highway robbery the last year or so. I have seen low value restaurants charge $ 53 a lb as market price. When in China town fresh crab at $13 a lb….

old guy
Reply to  Rejoice? Or re choice. Go veg !

i guess that means more for me !

Bug on a Windshield
Reply to  Rejoice? Or re choice. Go veg !

“When [cattle, poultry, and pigs make meals out of Monsanto grains], and we eat them — we are also eating all that they have eaten!”

Choose your food wisely. And if it’s seafood, maybe sparingly. We’ll be having crab for Solstice, I can tell you that.

Looking forward to it. A pair of dedicated “crab” players. A tea light under the melted butter dish. A big napkin. A big wet napkin. A margarita. Maybe some Jimmy Buffet singing “Christmas in the Caribbean”.

Hope every crabber that goes out, comes home. There are enough seagulls over the sea and Davey’s locker is full.

Angela Robinson(@arobbie1956)
Reply to  Bug on a Windshield

Not a fan of mac and cheese, except for Dungeness mac and cheese. It’s fantastic. A little dried mustard, smoked paprika, 4 kinds of cheese, a little bit of mushrooms and scallions, topped with French fried onions. OMG. Also, lots of fresh shook crab.

Bug on a Windshield
Reply to  Angela Robinson

Sounds delicious. Also sounds like a waste of crab. Kinda like guacamole for me: love it, but, it’s a waste of a perfectly good avocado. Can’t count the number I’ve eaten while sittin’ in a tree.

Oops, edit: supposed to be, “A pair of dedicated “crab” pliers.” Pliers, not players. Although, “players” works also.

Penguinn
Reply to  Rejoice? Or re choice. Go veg !

You must be a lot of fun at a dinner party.

Save yourself Veg,don’t eat it!!!

suspence(@suspence)
Reply to  Rejoice? Or re choice. Go veg !

Nobody is getting out alive. Try to enjoy the ride, you could start by taking that huge stick out of your backside.

It is about time that our very hard working fishermen get a chance to do some crabbing. I hope the season will be long enough so they all see a profit. It is hard and dangerous work, and I wish them the very best for the season, and hopefully no boating accidents.

Christmas crab! For the first time in years. I’m grateful for the families that depend on the crab season to “make” Christmas for their families.

We’re up in Oregon and to be honest it kind of caught us off guard. Our son got married nearly two weeks ago down in San Diego where he is stationed and we flew down. My husband was reading the news on his phone and I heard “Son of a Bitch!” come out of his mouth. What? I asked. He said the season would start on the 1st. We got back and it was, to use a fine turn of phrase, “balls to the wall” to get the pots loaded and ready for “dump day”.

I was worried that there would be the traditional strike, but the price is just fantastic. It feels kind of surreal.

Darn it! Just as I put all my savings into imitation crabmeat futures! Kidding, I’ll go put on my bib and grab my wooden mallet!

I’m sure glad it’s on schedule and I’m glad the fishermen are getting a good price but I’m scared what it will cost retail if the wholesale price is $4.75. Youch

That’s why it is important to have it in time for Christmas or New Year’s. It’s become a meal for special occasions.

Bug on a Windshield
Reply to  Mr. Bear

Buy from the boat. If you’re lucky, they’ll boil. You back and crack.

B REAL
Reply to  Bug on a Windshield

Theirs crab for sell right now at Woodley Island. Lot of the local crab will be heading south due to the season on hold because of the whales south bunch BS.

whale, come up with a better idea to save the migrating whales

B REAL
Reply to  c u 2morrow

Go crabbing and not worry about the whales is my idea.

My mother was a fishworker for Lazio’s in Eureka. She shook crab, peeled shrimp, filleted fish and did whatever was necessary to get fresh seafood to market. She supported 3 little ingrates with what little she made there. She could convert a cooked crab into crabmeat in a couple of minutes. We got fresh seafood 2 or 3 times a week when I was a kid. Fresh crab, crab cakes, crab salad, crab sandwiches and much the same for fish. I am still alive at 70. Maybe it was all that crab that made me such a cranky bastard!