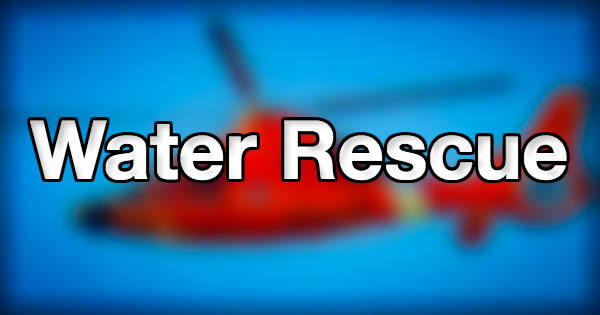 At approximately 4:16 p.m. reports began to emerge that a subject was in distress on a rock one mile offshore of Mendocino County’s remote Usal Beach.

Cal Fire’s helicopter 101 has been requested to the scene for an ocean rescue hoist.

The United States Coast Guard, California State Parks, and Fish and Game have all been dispatched to the incident. The Coast Guard reports they can be in the area about 5 p.m., but will cancel if the Cal Fire helicopter can arrive sooner.

Around 4:40 p.m., Cal Fire personnel reported to dispatch they are working to rig up the rescue hoist and predict the helicopter flight will take approximately 25 minutes to arrive on scene. They also expressed concern about visibility on the Coast hindering their speed.

Based on this information, the Coast Guard told dispatch they would continue to the scene.

UPDATE 4:55 p.m.: The Calfire helicopter is aloft and beginning its flight to the coast.
Scanner traffic indicates first responders are on Usal Road itself driving to the beach to assist on the shore.

UPDATE 5:08 p.m.: First responders driving rural Usal Road are reporting multiple vehicles driving on the road slowing progress and intend to shut down the road to clear the way for incoming rescue vehicles.

UPDATE 5:11 p.m.: The CalFire helicopter has reported they have about 500 feet of visibility on the coastline with slow 5-10 knot winds.
The Coast Guard vessel is reportedly 22 minutes out from the scene.

UPDATE 6:35 p.m.: Scanner traffic indicates that there was a party found on the beach as well as another found elsewhere with skull fractures. After first responders successfully retrieved the pair, against medical advice, the patients turned down assistance from the crews.

First, I hope that the rescue goes well and everyone is okay.
Second, I sure would like to hear the rest of this story!

I will second both of those thoughts.

Wishes for good luck and safety to all involved.

Is there a rock, a mile off shore, from Usal Beach? Could be…

Or could it be a rock offshore, north or south a mile, from Usal Beach?

Ok , I’m back, did a little quick research.

Shoreline Rock, near shore, maybe 100′ or so from shore, approximately 9/13 of a mile south of Usal Beach.

And,
Big White Rock, even farther, but north of Usal Beach, near shore unknown distancing.

Nothing found 1 mile off shore.

I think the former; “a rock one mile offshore of…” rather than “a rock offshore one mile from…”

I sure agree with Ernie, on both points!

There are 2 other rocks, Southeast of Usal Rock, nearer shore, very near each other, one about a hundred feet from shore, one about sixty, as near as I can tell.

The closest is Shoreline Rock, more like 20 feet from shore and about 4000 feet from Usal Beach.

Then, the farthest I checked, 4 miles south, Middle Rock, 500′ offshore, and Double Cone Rock 800’ from shore in fairly near proximity to each other.

What everyone else has said. Was racking my brain for a rock a mile offshore.

And then, I ask myself, how did the guy end up out there.

Yes. Did he kayak out to the rock and get trapped by the tides? Or did he swim out to it?

A Guess
Reply to  J

Due to the proximity, I’d say Shoreline Rock was most likely.

Then, one of the other two next to each other, nearer the shore, south 2 miles or so.

But who knows they could be stuck on a smaller one, near shore.

Skull fracture and refused medical care. They must have past the level of consciousness test. But wow. Also never heard of that much traffic on usal rd. Except for inappropriate rigs getting stuck off season. That’s a tough rescue. Thanks to those that responded.

While we are waiting for the “straight skinny” on the rest of the story, I have a tidbit of USAL history. First USAL is “United States of America Lumber”. They were bought out in 1893 by Robert Dollar. There was a 1600 foot pier into the ocean on USAL beach. Robert Dollar bought a steamship called “Newsboy” to haul the lumber to San Francisco. Not the Famous “Newsboy” sailing ship back East, but the west coast steamship, “Newsboy”.
My 3g Grandfather Middleton had a Redwood splitstuff camp in USAL. Contemporary to USAL’s heyday.
Robert Dollar later became the owner of Dollar Steamship lines and made the cover of Time Magazine in 1928. My Grandfather Middleton went on to make more splitstuff…
Interesting link to, about Robert Dollar: https://www.foundsf.org/index.php?title=Captain_Robert_Dollar

Very interesting. Had no idea that USAL was an acronym. Thus it should be spelled in all capital letters on maps. The Dollar Line was notable for have a dollar symbol ($) on the smokestack. The Dollar mansion still stands on the grounds of Rossmoor in Walnut Creek.

The Dollar mansion is Falkirk in SanRafael, now a community centre

Thanks for the clarification. The Dollar mansion at Rossmoor was Stanley Dollar’s place who I assume was Robert’s brother.

According to Alfred L. Kroeber, the Indians also called the place Usal:
‘Usal, in Mendocino County, pronounced Yusawl, was in Athabascan territory but appears to be the Pomo word Yoshol, containing the stem yo,”south.” Sho is”east,” and -1- an ending of terms of direction in the same language; but it is not known whether these elements enter into the word.’
“California Place Name of Indian Origin”, 1916.
https://digitalassets.lib.berkeley.edu/anthpubs/ucb/text/ucp012-004.pdf

Anonymous for fear of community reprisal

Unfortunately the road is in good shape this year and everybody has rediscovered it as their party place and have completely destroyed all the campsites again… I Was really hoping to take the kids out there camping this year, but I’ve heard from several people who have been out there that it is completely destroyed. With lots of large parties featuring drunk idiots with guns and cars.

I like stars
Reply to  Anonymous for fear of community reprisal

Hard to have anything nice.

After all that attention to rescue them, they brush off the first responders? Who the hell called for help? If they were in distress, then surely a bystander felt it was serious. “Multiple reports….” I’d send them a bill.

Being a very perceptive person, and having had to learn everything the hard way. I will speculate (WAG) what really happened.

I think that they were on a rock on the beach, either north or south of USAL. They eventually fell while trying to get back off rock and banged their heads on the way down.

It was probably a a re-run of Jack and Jill. You know… Jack and Jill went up the hill to fetch a pail of water. Jack fell down and broke his crown and Jill came tumbling after.
(sorry)

Skull fracture? They both need to have their heads examined.