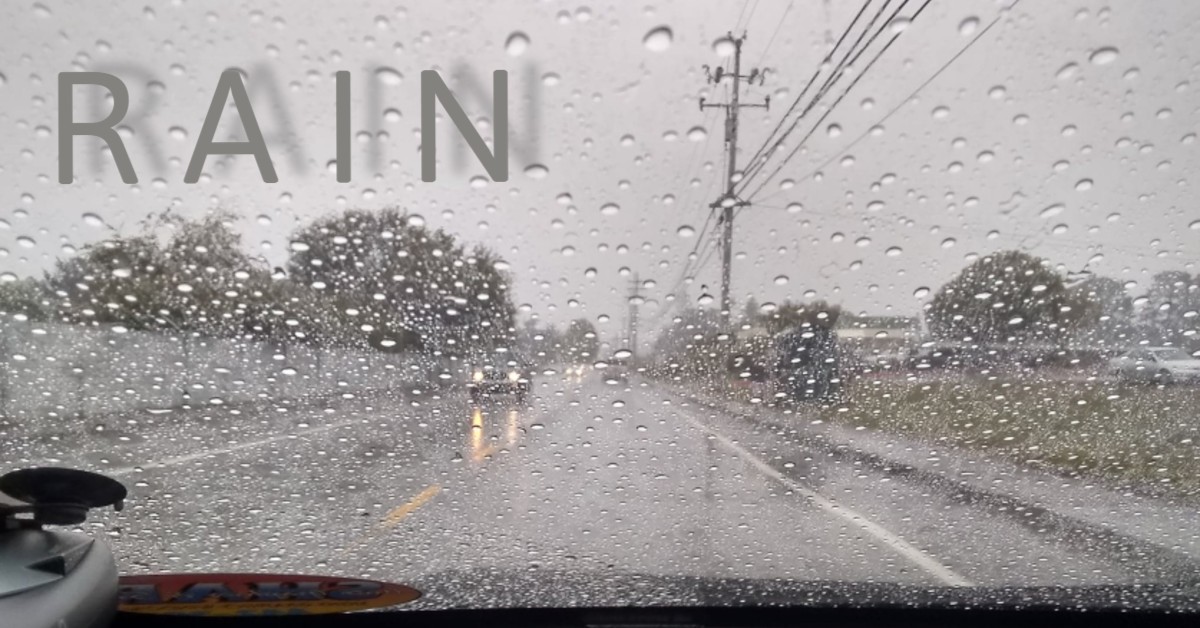 Depending on where you are in the Emerald Counties, you either saw record breaking rains for this time of year or a faint sprinkle.

Areas to the northwest like Eureka and Crescent City broke record rainfall numbers for this date. According to a tweet by the National Weather Service in Eureka, “Yesterday’s rainfall in Eureka of 0.73 inches breaks the previous June 13th record of 0.62 inches that was set in 1992!”

But areas further north saw even greater amounts of precipitation. “Yesterday’s rainfall in Crescent City of 1.94 inches shatters the previous June 13th record of 0.63 inches that was set in 1907,” the Weather Service tweeted.

Jeff Tonkin Forecaster for the US National Weather Service in Eureka told us that basically the further east and south you were, the less rain you saw. “There was basically a line from Arcata up to Grants Pass,” he explained. “We didn’t get a lot precipitation from Arcata southward.”

But the rainfall was heavier than expected in some areas. “We got quite a bit more rain northward,” he told us. “It was a really moist wet storm…More rain than the forecast models had predicted.”

Unfortunately, he explained, “One little rain event isn’t going to stop drought conditions…It really didn’t help our situation much….The grass will stay green for awhile, but we have a heat wave coming up…By the time we get to Thursday or Friday with the high heats [predicted], those fuels will dry up rapidly. It’s not just going to make that much difference.”

The Weather Service tweeted, “Temperatures will be on the increase across the interior later this week as high pressure builds over the state. Hottest days are expected to be Thursday and Friday.” 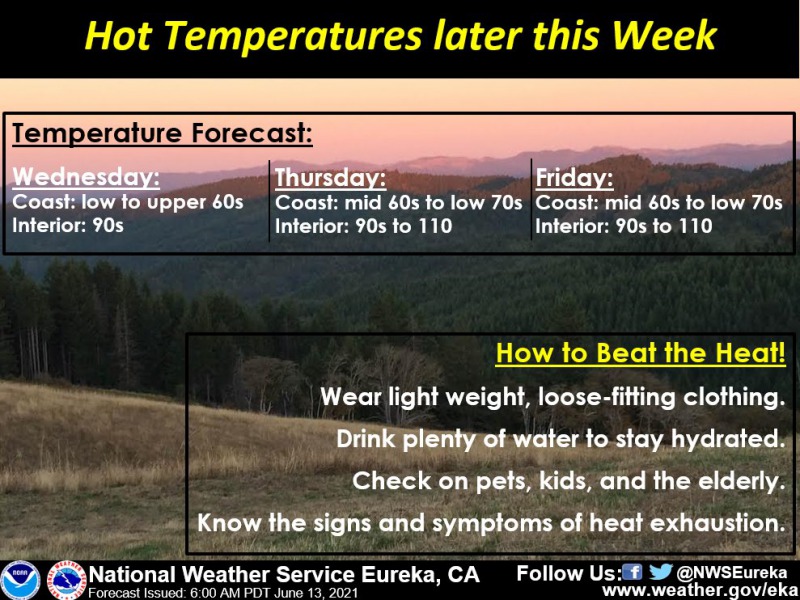 [Graphic from the National Weather Service]

This is the best WAP parody… Fed Asst Printing… Only nationally sponsored fraud can make it rain now..

But for realz? PRAY FOR RAIN

Dang… What a depressing way to phrase what should be a welcome event- “One little rain event isn’t going to stop drought conditions… It’s not just going to make that much difference.” Well,it does make a difference when that rain falls. It couldn’t have been better timed for gardens and many crops that are just starting to produce fruit and especially berries. Which wildlife will use.

I live both east and south of Arcata. It was still raining this morning. It was very pleasant to wake up hearing. Maybe it’s not everything but it’s something that was needed.

I appreciate and echo this sentiment. I know my plants were happy and I’m pleasantly surprised we got more than anticipated. I know it doesn’t resolve the drought but a June storm is reminiscent of years past in Humboldt and I truly lived in the moment enjoying the sound of rainfall and birds early morning… for what it’s worth.

Average june rainfall for eureka is .68 inches. It doesn’t rain much in june. Never has.

Not quite how statistics work.

i agree AO.. we got a pretty good amount of rain through the night and into the morning also. i was really surprised at just how much and how quickly all our native plants have put on new growth since the earlier rain a few days ago.. sprang/perked up literally overnight. we have a lot of plants that are flowering or just starting to flower like our vervain (one of my favorites) and this should lead to many more blossoms for the bees and fatter berries for me and all the lovely grosbeaks (and other feathered friends) we have hanging out this year.. yay!

Like everything these days keep instilling fear and prey on peoples fears. Not good news we got rain but no drought is still with us. no scientific basis for this. What constutes a drought? What basis are we in a drought? What threshold did we pass to be in a drought and what do we need to get out of it?

I am not denying we are in one but what is the basis of this fact?

Kym this is no slam to you but insted of the state and scientific community that releases fear mongering statements like this. When we have 100% “normal” rainfall they always come out about how bad fire season will be due to all the rain and tall grass. When we have low rainfall it will be bad because it is dry. You can not win fear fear fear to control people. Hopefull you see my point.

That is just the reality of the situation, Auntie. You wouldn’t want ppl thinking oh, great, now I water my lawn and wash my car and take long showers because it rained a little. You want a positive spin on an otherwise depressing water crisis?

Well said, so now I don’t have to. Thanx!

Rain this time of year just creates more fuels for fires. Not really a good thing at all. Nice to have the dust knocked down for a minute though.

I was thinking that same sentiment yesterday as it was coming down. I’m glad the creeks got a little water in them, but the fuels load is going to go gangbusters in the next couple of weeks. I don’t want to be right, but I think we’re in for a BAD fire season this year. Be safe everyone and have a backup plan if you’re in a rural area with limited roads. Now is the time to inspect and improve your exits if necessary.

This is not going to be a bad fire season. First California has a budget surplus now. This means the governor will not be lighting the state on fire for insurance bailout money. Also Newsom is up for re-election and he doesnt want to look bad during the election. For these reasons the treasonous democrats will not be lighting the state of California on fire this year.

Uhm….is Newsom also responsible for the Oregon fires? Or the Arizona fires?

Or, you know the fires that lit up the West these past years?

I thought last years fires were started by Jewish ppl with lazars mounted on satellites. No? It was democrats? Ok, thanks for setting the record straight.

Grass is already through growing in the hills.

Yeah that’s what I was thinking. The browning of the grasslands around here is more about solar cycles than moisture. It would take a ton of rain to green up the hills once they have dried out.

The grass is green and has grown 3 inches since Saturdays rain on the mountain I live on. The grass isn’t done growing anywhere in humboldt county yet. Maybe in trinity county…. but I doubt it.

Growth is a cycle for most wild vegetation and that vegetation is in the reproducing phase now. Rain or no rain. Some opportunistic seeds may sprout but will not find enough water to grow on unless it keeps raining. Maybe it will permit some plant to survive grow for next fire season but it a total lack of future wildfire fuel really wanted?

I’m busy today and haven’t been able to get to comments until now. (I didn’t edit AO’s comment)

You show up in the comments moderated. I have to approve you. But you aren’t on the moderation list. Your IP address is very close to one that has been banned and I suspect that the software is holding you for a reason related to that. I’ve tried something to see if I can shake you loose from moderation. But, I’ve had one other case, Guest, that I could never consistently remove her from moderation. Sometimes she comes through fine and sometimes she is moderated and I don’t understand why.

That’s more of an issue with April rains, most fuels are already senescing by now and won’t grow more with this rain. It’s honestly a perfectly timed storm. If we can get another dump like that in July we’ll be doing great

Westside Eureka, not enough to make a puddle.

must be due to chem trails

aww what a wonderful site it was

Creeks are back raging. Our overflow is usually dry this time of year, this morning it’s pouring over.

I had right at 1.00″ at my house in Eureka. Now the dang grass is going to start growing again, I was hoping I was done mowing for the season.

“It will be the worse fire season in memory…” says CDF every year regardless of conditions.

There is some reason to be concerned.

For Sooth!
We got over hald an inch outside of Fortuna.
Very soothing, indeed.