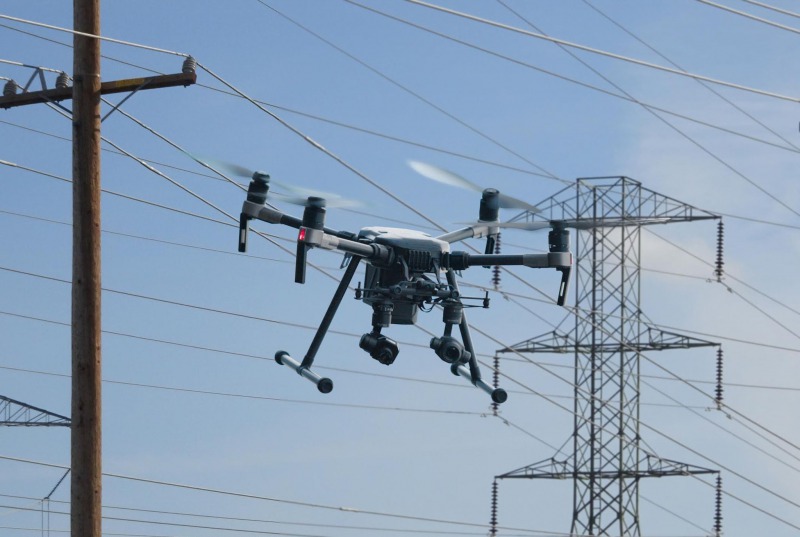 A image of a drone similar to the one that will be used by PG&E throughout Mendocino and Southern Humboldt County. [Picture provided by PG&E Spokesperson Deanna Contreras]

Residents of the Mendocino Coast town of Albion today reported sightings of a low flying helicopter which has now been confirmed as conducting surveys for PG&E as per their North Coast Spokesperson Deanna Contreras.

Contreas told us yesterday’s surveys mark the beginning of a regional campaign to conduct system inspections “using drones and helicopters along electric transmission lines that run through Mendocino County and Southern Humboldt County.” 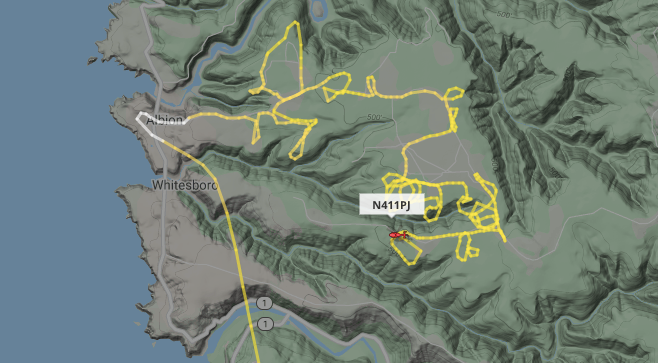 Flightpath of the helicopter seen yesterday. [Screengrab of an image from FlightRadar]

Contreras clarified that the helicopter seen yesterday flying above Albion was not part of the transmission line inspection program. The helicopter was “conducting pre-inspection helicopter flights in Mendocino County to improve its Public Safety Power Shutoff (PSPS) program events for our customers and communities.

The helicopter above Albion was a Bell 407 (Tail #N411PJ) and what residents saw was PG&E conducting a pre-PSPS flight “designed to gather the information that helps PG&E understand the amount of time it will take to safely complete the patrol.” 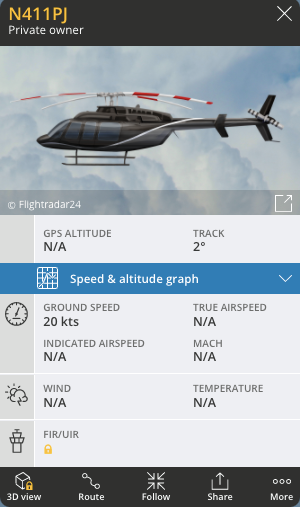 Graphic of a helicopter similar to the one seen yesterday. [Screengrab of an image from FlightRadar]

This process, Contreras explained, will require helicopters to fly low at approximately 100 feet between the hours of 7:00 a.m-5:00 p.m. She emphasized, “This is not a PSPS, and power will not be interrupted during these flights.” The pre-PSPS flights are designed to “help crews execute future patrols more efficiently” and “better determine the timing for restoring electric service to customers.”

Regarding the transmission line inspections in Mendocino County and Southern Humboldt, these efforts “occur on an ongoing basis,” Contreras said, and are tasked with finding and fixing “potential risks to the safety and reliability of the system.”

Contreras explained PG&E is concentrating its efforts on areas of extreme and elevated wildfire risk as defined by the California Public Utilities Commission High Fire-Threat District Map. “Equipment along electric transmission lines located in Tier 3 and Tier 2 areas will be evaluated more frequently, while infrastructure in non-high fire-threat areas will be inspected at least every six years,” Contreras added.

These inspections will closely examine PG&E’s equipment “including cross-arms, insulators, and footings, along with critical electrical components and equipment,” explained Contreras”

She said that all the equipment is documented using high-resolution images which are then reviewed by PG&E experts trained in system maintenance, engineering, construction, and maintenance planning.”

Contreras said that after close inspection of the equipment, “highest-priority conditions found through inspections will be promptly repaired or made safe.”

Contreras said PG&E has notified customers near the transmission lines that drones and helicopters will be used to inspect transmission lines via postcards or automated phone calls. Mendocino County residents can expect to see inspections ongoing Monday-Saturday, 7:00 a.m.-6:00 p.m. till the end of July.

Specifically this week, Contreras said PG&E personnel will be flying drones along power lines that run from “Mendocino to Willits to Fort Bragg and from Elk to Gualala.”

In general, Contreras said PG&E will be using three helicopters to conduct these inspections flying over Mendocino County and Southern Humboldt with the following tail number: N55TV and N407GH, and N447GH.

They were hovering over Myers Flat this morning for a few minutes before heading south. 8:00 AM

Gee that plan sounds a lot like CAMPs wet dream. Or the new CAMP, the planning dept. At least be open PGE, will sheriffs be in the cockpit taking photos like the last few years??? Its a small county after all, we find out. Plus seeing one in the chopper with my binocs pretty much sealed the deal. Abated a neighbor for 10 plants, each in 25gal pots. Small. For real. Probably will have them take along someone from county planning office so they can get pics of the structures they told folks needed no permit in the 80’s that they now say are illegal. Yes folks your taxmoney is being spent to figure out how to mess with senior citizens by saying structures they live in are not permitted and if you cant afford the permits youre out. So they can get the property in the hands of a cartel which is job security for cops&many county depts. Not to mention the bribe money and what they can confiscate for themselves at those huge grows. Planning dept already said 2022 starts the crackdown on “unpermitted” structures with no grandfather clause. Theyre gonna try to turn our county into wealthy… Read more »

The hills have eyes
Reply to  Watch out, take pics

Dude. Readjust the tinfoil there. You don’t need aircraft at all to see into your yard. You can rent real-time satellite data. Also, Fish and Wildlife will get you too, just by what you allow to reach the groundwater. No helos necessary.

I fly one of those drones for PG&E. I’m a contractor and inspection is what I do. I do not care if you’re growing in your back yard, it’s none of my business. I’ve done this for three years trying to help. I spend 9.months here in California 4 states away from home. Be aware that it is illegal to shoot any drone down in the US, PERIOD!! ITS A FEDERAL OFFENSE!! It’s my livelihood that I travel all over doing. Talk to a pilot after he’s landed. Ask to see pictures. We have nothing to hide from anyone and would love to show you what we’re doing.
But for the love of God, don’t shoot us or our drones, please!! We’re only trying to help.

Another reason I am glad there are no damn power lines near my property!

🕯🌳Watch out the people on the Covid thread will have them reading the imagery chips in your blood stream in a couple of days. 🆗️