All the King’s Horses: A Mother’s Day Thank You to Those That Helped When Our Son Was in a Terrible Accident

Every couple of years on Mother’s Day, my family honors the neighbors and emergency personnel who helped us when our son was in a terrible accident in 2009 by reposting this story I first wrote 12 years ago.

This piece is a reminder to me and mine how lucky we are and how blessed.  May all of those less lucky find comfort in their grief.  May all of us who are lucky recognize it and feel joy. 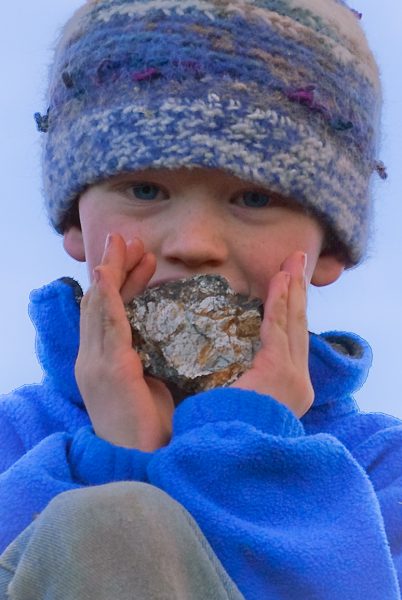 I can write about what happened, about him.  But can I make you feel it, see him?

Can I wrap the warmth of the day, the buzz of insects, the dull thud of lumber stacked on lumber in words and place them so that you can see the ordinariness, the humdrum quality of a working day shattered? And, if I do, will the effort to make you feel and see become a playhouse stage?

That one word splits the skin of ordinary that walls us from the ugly possibilities that lurk beneath the surface of each second, waiting to grab our legs and pull us under.  That one word peels back normal and reveals how extraordinary and lucky life has always been.

I glance at where my taller-than-me son, Quinn, is looking and from the loft above whirls and wheels a grayish flutter, a flurry that resolves …

into Malachi, my littlest, my almost baby stumbling from the sky…

I might have caught him whirling from the loft above.  I didn’t though. I watched my reality crumble as I stood gaping, useless hands grasping cleaning tools, as he thudded skull and neck into a heavy iron stove.

For some fraction of a second he must have paused– black iron crumpling bone within small skin. My eyes must have closed to try and find some solidness within to steady the shifting world beneath my feet and then the downward force reversed him off the stove and he fell again from stove to floor.

His head bent sideways to his neck.  His blue eyes opened…and then they closed.

“Kevin, come here now.”  This a second call. The first a quiet prayer for help he didn’t hear. This last a loud demand my husband fix my world as he has always done.  Somehow he was there. We knelt side by side but eyes fixed only on the small bit of broken flesh that was our littlest–our blue-eyed, pale-skinned son.

And then he died.

There was no trickle to indicate the torrent to follow but like spigot turned to full, blood broke down the dam that held it within for almost seven years before and red went spilling thickly down across his lips and onto the floor.

Somewhere behind me, Malachi moved and somehow I knew and so I ran and cried.

In a right world, grotesque and death would not be such close bedfellows but in this unreality that was my world the two twined like lovers.  As I raced, our dog, our Touchstone, bounced, delighted in the fun, barking, biting at the ground around my feet.  Screaming and cursing, at this obstacle that never came close enough to grasp, I fought my way from barn to house.

Inside, gasping for breath, clutching our phone, I dial 911.

How oddly unemotional they seem, those voices from far away as they calmly take the information that my little guy with blue eyes closed lies dying.

Facts lined up.  I can hang up.  I call once more.  A friend a neighbor an EMT.  “Come, Malachi fell from the loft of the old funky house.”  Her kids have played with mine.  She knows the spot. “His neck. There’s blood.  A lot.”

I start to go back.  Like elastic stretched too tight, I’ve been pulled too far from where I need to be.  I want to snap back, zinging close to white skin touched with freckles and now painted red with blood.  But I stop and race to the bathroom for towels.  Incredibly, I wonder whether I should go get rags or use these pale green beauties less than 3 weeks old. Pagan like, I offer their unsullied perfection to the gods- hoping desecrating them will be sacrifice enough to save his life. The elastic pull of time almost sends me flinging back up the hill to him but he might need water and I wring the faucet knob tight to milk the water fast into a silver thermos.

Then I am up the hill and Quinn, my tall strong son is there.  Hurrying me up the hill even further.  While I’ve been gone, Malachi has struggled up from where the dark was pulling him.  He won’t stay still upon the rumpled iron poles of rebar.  Kevin, like Goldilocks, demands from Quinn and Robin, a friend with us there, a piece of plywood not too small and not too big. And then with one smooth small lift, they transfer him blood, blue jeans, and freckles to the wood.

Small son held steady on the plywood bridge between father and older son, while Robin placed strong hands on either side and used his voice to guide.

Up to our car, back seats down and I am there with towels to wedge him in.  “Don’t move.  Keep your neck still.  Stay down.  Are you okay?”

An ambulance will be at least an hour.  We live so far up on the hill.  The dirt roads between here and town make time slow down and that is beautiful when life is good but now, when every second clicks him one bit closer to the darkness swallowing up his light, I want a freeway running to my house.

Then friend, neighbor, EMT… she comes with brace and oxygen and know how– just a bit of knowledge that could save his life.  Expertly she does and asks and does some more.  His neck is braced with steady hands.  He doesn’t like it but Robin leans in close and with a Dad voice commands him still.  Another EMT, this one, Matt has children also that play at school with Malachi.  There is comfort of knowing that those sticking needles into tender skin care almost as much as we. 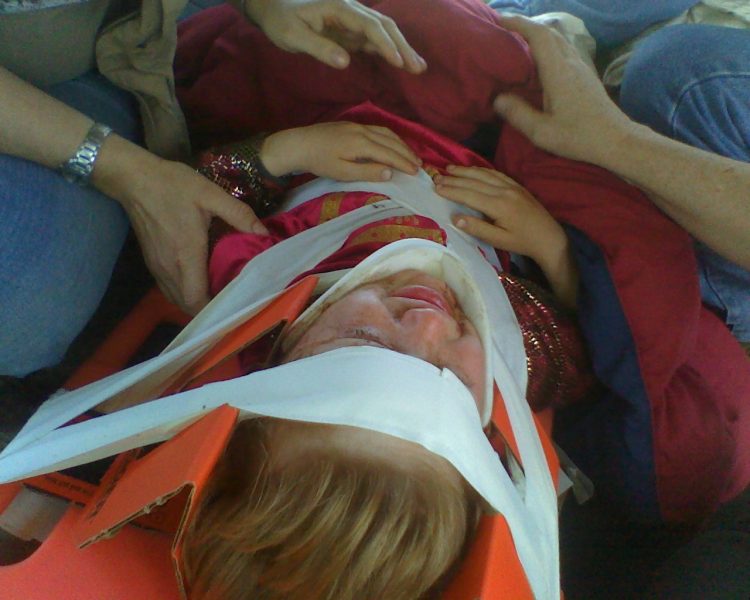 Lisa Gribi on one side. Me on the other, Malachi is taped to the backboard with two neck braces holding him still. [Unable to do anything else, my husband began photographing him thinking that this might be the last we saw him alive. I can’t hardly look at his small hands and bloody mouth and face without crying.]

Malachi is still alive.  As Lisa talks him through the moves, “Can you wiggle your fingers?  How about your feet?”  I breathe and sit beside–jealous of her arms holding him gentle still against the body board that has replaced the plywood stretcher.

Then…I don’t know how but he is puking …blood.  Blood is everywhere.  Lisa’s voice keeps going but I hear her fear for him, for me, for us.  He’s dying again.  I know he didn’t die before but to me he did and he is dying again.  And I can’t hold him one more time and watch the sweep of lashes against his cheek because Lisa needs to do what she needs to do and Kevin’s face is against the car window, watching–not able to be as close as I to son and heart and blood.

Somehow I am outside again.  Yelling and Quinn is holding me and then Kevin’s arms are around me. And then I am somehow back inside and gently wiping dark red blood with puke from him.  And then from Lisa’s sleeve and far away but really still inside the car Robin wipes his hands against a sheet that I brought up way too long ago.

Where is the ambulance?

Where is the ambulance?

After the blood–all that blood–Matt and Kevin call the helicopter. We dare not count the cost. We can only hope that we can pay because every bit of speed is necessary.

And then we drive to a place not far but where the medivac can land in a field of grass.

Malachi with me and the EMT seen through the hatchback of our Scion. [Photo by my husband, Kevin Church.]

Somehow the ambulance finds us and time collapses in.  I remember neighbors, firemen and EMT’s –my wonderful neighbors who give up nights and weekends to train for this.  And yet still they aren’t enough.  Like all the king’s horses and all the king’s men, they can’t put Malachi together again.

The ambulance from far away has strange but kind men that ask my son questions which he answers from far within.  He isn’t crying but so still and obedient that I can not see the son I know within the shell that belongs to him. 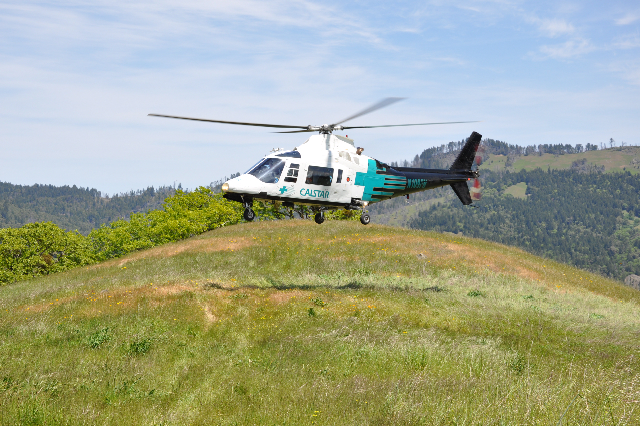 Medivac helicopter lands on a hill not far from where we wait. [Photo by neighbor Dan Gribi]

Above, suspended in air, the helicopter hovers, searching within the sea of grass and trees for the group of cars and people willing it to land.

Emergency vehicles and helicopter gathered to the left of our small vehicle which holds our son. [Photo by Dan Gribi]

Then, like warriors, women dressed in black with helmets rush from its taut belly. 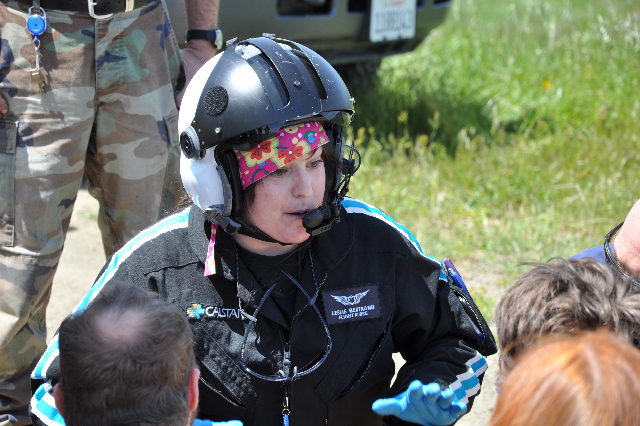 The questions start again.  “Can you hold my fingers? Tight…squeeze tight.  Are you okay?”  Beneath half-lidded eyes, between teeth barely opened wide enough to let words move, he mumbles and she lifts her eyes to mine seeking translation.

“Not necessarily.” His words release a grin from me while repeating his words back to her. She smiles swift, but then returns to work while I roll in my mouth “not necessarily”—relieved that somewhere inside the white skin splotched with blood, Malachi lingers. 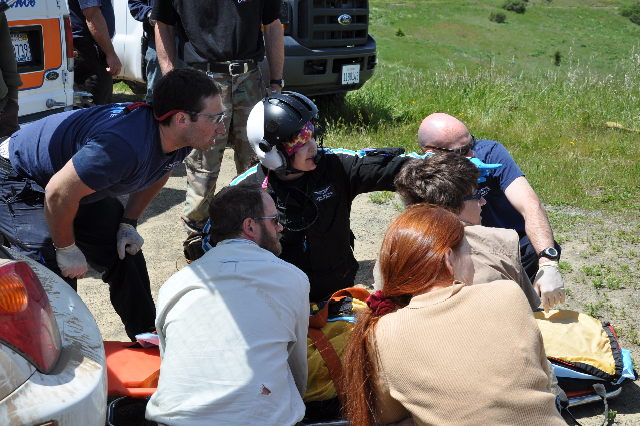 My husband, Lisa Gribi, ambulance personnel, and others carry Malachi to the helicopter. [Photo by Dan Gribi]

The helicopter took him from us to Redding.  Again, a neighbor, Dan Gribi, saved us with an offer to fly us so we didn’t have to drive 5 hours to get there.  Before we left, we got a call from the helicopter crew chief that Malachi wasn’t bleeding internally.

A friend in Redding claimed she was his aunt and sat by his side–some two plus hours until we were there.

Because they had no pediatrics neurosurgeon there in Redding, the doctors then sent Malachi and I on to UC Davis Pediatric Center in Sacramento by plane.  Kevin and “the aunt” drove in her daughter’s car two and a half hours to follow us.

Malachi ended up with a fractured skull, cheekbone, and eye socket. But today 4 short days later, all you can see is a few scrapes and a light bruise around the eye— nothing else. 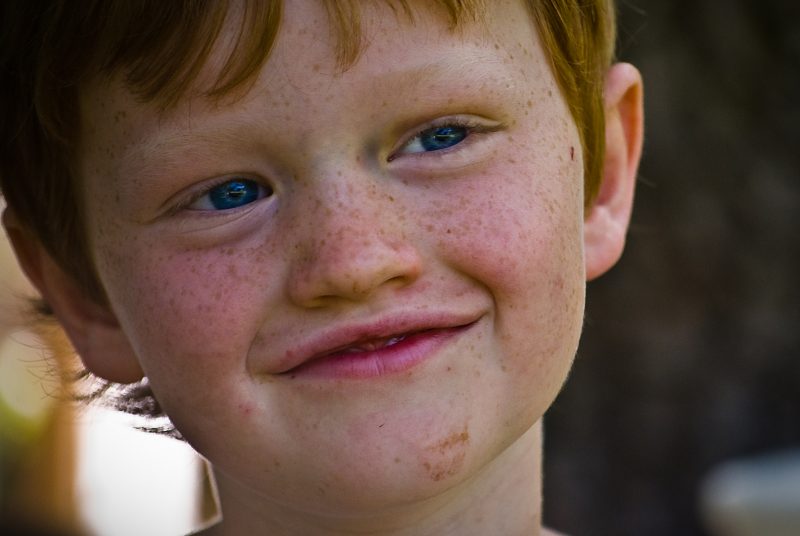 Malachi just six days after his accident with a few scrapes and a bruise around his eye. [Photo by Kym Kemp]

We drove seven plus hours to get home. Today, he played in the sun in our driveway surrounded by flowers.

Thank you to Quinn–my middle son, Robin Fleckles–friend so long, Lisa Gribi, Matt Stark, Dan Gribi, and all the other wonderful Salmon Creek Fire Crew, the ambulance crew,  Diana Totten with her mother and sister (Aunt) Barbara and Debbie, Calstar medivac helicopter crew, the Mercy Air Crew (especially Randy and Tim—thanks for also rescuing my wallet), the doctors, the nurses, the technicians, my mom, my wonderful friend Debbie Green and her husband, Mark Sanchez, and everyone who called and offered help and support.

Malachi, a year ago. [Photo from Sandi Petersen Photography]