[UPDATE 6:39 p.m.] Last Night, Law Enforcement Was in Brooktrails Confiscating a Vehicle Which Appeared to be Connected to Friday Morning’s Fatal Hit and Run 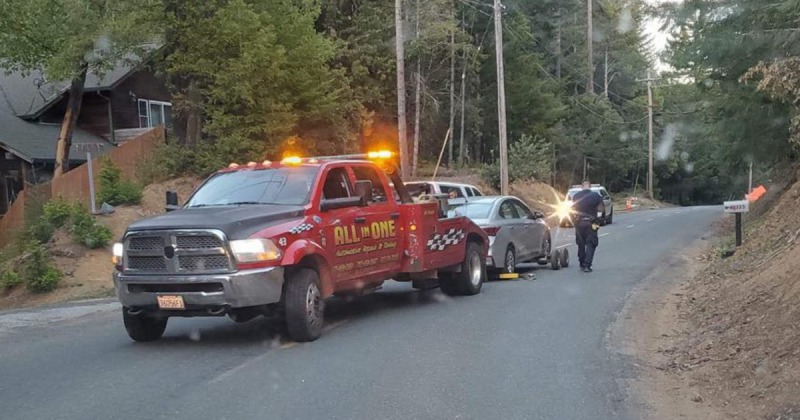 Last night at approximately 7:45., California Highway Patrol officers and Mendocino County Sheriff deputies were seen near the 24000 block of Lilac Road in Brooktrails towing a silver sedan that witnesses say matched the description of a silver 2018-2020 Hyundai Accent sought for its involvement with a fatal hit and run that occurred early Friday morning.

41-year-old Fort Bragg man Paul Brown passed away as a result of the hit-and-run. Speaking to his sister Carrie Callan on Friday morning, she described her brother’s passing as “horrible and shocking.”

As per a press release from CHP Garberville office, the hit and run occurred around 1:20 a.m. after a 2018-2020 silver Hyundai Accent crossed over a double yellow line striking Brown who was walking on the shoulder.

Brooktrails resident Theo Vincent Corcoran told us he was driving and stumbled upon the 24000 block of Lilac Road where he photographed a silver sedan loaded up on an All-in-One tow truck with numerous MCSO and CHP vehicles parked on the road.

Another Brooktrails resident told us they saw a tow truck and vehicle being escorted down Sherwood Road towards Willits by law enforcement. They noticed the front end of the vehicle was damaged, specifically the passenger side front headlight and corner of the bumper.*

This last resident’s sighting matches the description of the damage CHP provided in Friday morning’s press release: “The silver, 2018-2020 Hyundai Accent sustained left front damage as a result of this traffic collision. The damage includes the left headlight assembly and the front bumper.”

We have contacted the CHP Garberville office for information regarding their officers’ presence on Lilac Road, but as of publication have yet to receive an answer.

As of Friday morning’s press release, CHP Garberville requests if “anyone has any information which could lead to the location of the silver, 2018-2020 Hyundai Accent or to the identity of the driver please contact the CHP Garberville area at (707) 923-2155 or at the Humboldt Communications Center at (707) 268-2000.”

*Please note: The CHP description indicated that the damage would likely be on the “left” side which would normally be the driver’s side.

With the public’s assistance, the CHP Garberville Area has located the silver 2019 Hyundai Accent involved in yesterday’s early morning vehicle versus pedestrian fatal hit-and-run traffic collision.
If anyone was a witness to this traffic collision or has surveillance footage, please contact the CHP Garberville Area at (707)923-2155 or at the Humboldt Communications Center at (707)268-2000.