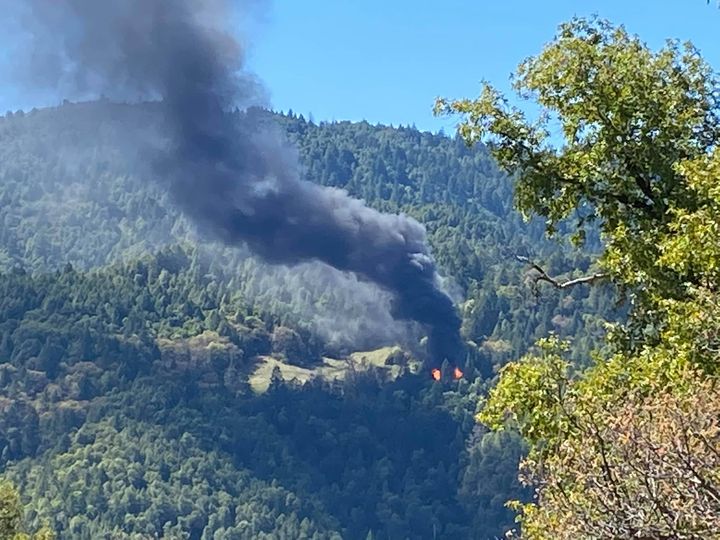 Flames and smoke rising from the structure. [Picture provided by a nearby resident]

This afternoon, Laytonville Fire Department and other firefighters are responding to a fully involved structure fire nine miles northwest of Laytonville on a plot of land known as the Bowman Ranch. Ammunition is “going off at the residence,” as reported by the dispatcher to responding fire personnel. Scanner reports indicate the structure is engulfed in flames and the fire is spreading into nearby vegetation. UPDATE: 2:16 p.m.: The dispatcher told responding fire personnel the house is now on the ground and the vegetation is “exposed.”

UPDATE 2:31 p.m.: The Incident Commander reported the structure is completely on the ground and the fire spread uphill from the structure between 1/4-1/2 acre. He said a couple trees around the structure are on fire and the vegetation is burning at a slow rate of spread.

We were able to confirm the structure is located on the 5000 block of Hargus Road.

UPDATE 2:47 p.m.: The Incident Commander reported forward progress of the fire has stopped but requested all incoming units proceed to the scene.