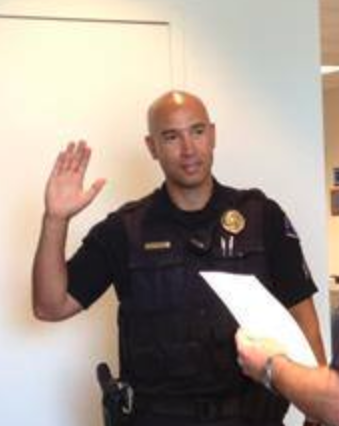 Jacy Tatum being sworn in as sergeant in 2015. [Photo from the City of Rohnert Park Police and Fire’s the Facebook page]

–Previously—
Today, two former Rohnert Park police officers–Sgt. Jacy Tatum and Officer Joseph Huffaker–were indicted on “federal charges of extortion under the color of authority, falsifying records and tax fraud, a stunning revelation following years of allegations some of the city’s public safety officers had robbed highway drivers of cash and marijuana during traffic stops,” reports Julie Johnson of the Press Democrat. Click this link to read her story.

Though Johnson wasn’t able to confirm that this indictment was related to the story we broke concerning cannabis seized from Zeke Flatten in December of 2017, she did state, “The charges indicate some of the alleged crimes occurred while they were on duty.” 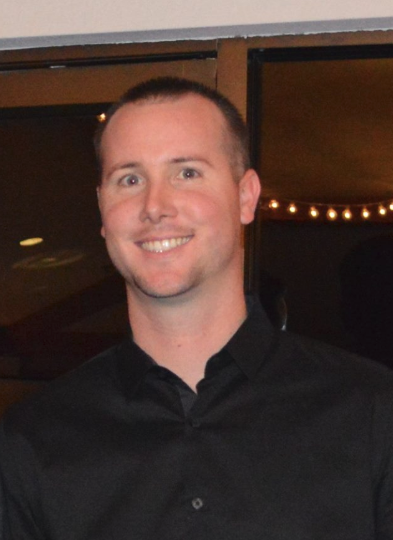 Officer Joe Huffaker after receiving “a lifesaving award” in 2015. [Crop of a photo on the City of Rohnert Park Police and Fire Facebook page]

In April of 2018, we described the events that led to the officers being investigated for a coverup. Multiple plaintiffs, including Zeke Flatten, eventually settled for large sums of money with the City of Rohnert Park. The story is worth reviewing today as the officers face further charges for actions they allegedly took while on duty. Click here for a detailed description of the main events. Or follow the whole story in the articles below.Earlier Chapters:

Gotta make ends meet somehow, just like a whole bunch of dope peddlers. I’d trust a cop over most other people that have to do with anything involved with the drug trade, legalize all of it. Tax it and and if rehab doesn’t work then prison.

That is a really stupid statement !

Sticking up for officers stealing cash. Here’s a class act 😆

Lest we venture down the road of corruption that plague many countries south of the border, it might be best to nip this one in the bud. As apparently happened.

Greed is a sickness. Power too I imagine.

They were just caught, asset forfeiture is a massive funding operation.

Greed and power are prerequisites for certain jobs.

Had Texas state troopers take 197k over a decade ago . They are all liars and thieves , these mf would have never gotten caught had they not pulled over another pig like themselves . It’s only because it wasn’t a normal citizen accused them. If it was anyone of us saying they stole the R.P. Police would have never listened.

Where is the chain of command in all this? It all smacks of a conspiracy to enforce “law” far outside of the accepted “jurisdiction”…

Why have the other conspirators not been charged?

This isn’t over yet.

Guarantee this floats upstream to the top.

I was amazed that the parties were paid off handsomely, to go away, we presume, but the evolution of this story will have far-reaching effects…

Was Zeke Flatten breaking the law, when the shit-storm broke? Did his 3 or 30 pounds enrich the Police Chief? The Mayor? I certainly didn’t know who to believe, and I still have feelings of suspicion regarding Mr Flatten’s story… He’s been well compensated, and I am not noticing further intelligence from that direction…

I’m the guy who predicted that nobody would be fired, or compensated… Now I wonder just how far this will spread!

Corruption is the seed of of illegal acts, and, bad cops are put on notice.

Thanks for the update, Ms Kemp!

It’s far from over theese Rohnert park officers need tobe locked up,make an example out of them. There are hired to up hold the law,police in rohnert park think they are above the Law. They get away with everything. There are officers who I know still work for the Rp department that sell guns and give info to criminals. They are not cool. I moved out of county because of theese 2 iam scared to come forward for fear what will happen to me or my family. When I was in my using days I’ve gotten high with Joe.

No idea if this is true or if this request enabled a jurisdiction claim.

VMG. Humor me on this if you read this comment. Did you post comments as…groba dude osnt trustafarian?

Tired of prohibition and dirty cops!

That list of “earlier chapters” is enough material for an HBO miniseries. This type of journalism is had to come by these days. Kudos to Kym and staff.

If the officers had good training and quality supervision none of this would happen. Too loose, too long, too little too late. If those that are to protect and serve are worse than the “criminals” who are they truly protecting and serving?

Good job Mrs. Kym! Our vehicles and hard work is not the proverbial cookie jar for corrupted cops. When people say the Cannabis industry was not taxed.. that’s a joke and simply false. How much revenue has been taken in thru corruption, and mis allocated confiscation? This just illustrates how corrupt officers can be!

So do you got any advice on how to move forward with info I got. Iam so freaked out about what they will do…Tatum still calls my cellphone I got several recordings on things hes done.in fact I still sleep at night with something Joe gave me to protect my self with. I guess that came from the evidence lockroom. He said one day. It’s where he got it. He told me dont worry it was marked as destroyed.just dont get caught with it.as of last week he offered to pay me to shut my mouth…. Not doing that, there is others that are dirty within that department.

If you would like to reach out to me, my email is [email protected]