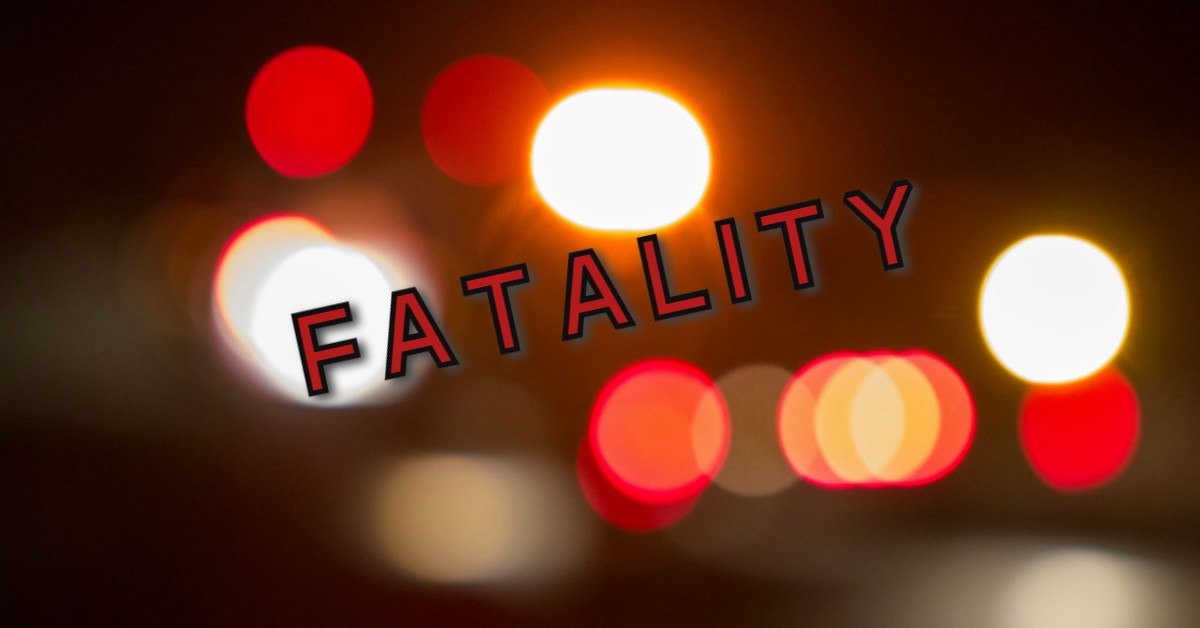 Impairment is being investigated as a contributing factor in this collision and Ms. Ruvalcaba was placed under arrest for Misdemeanor DUI charges related to the collision. She was subsequently released to the hospital for treatment of her injuries.

Fernbridge Drive. There is no Ferndale Drive. 😉

Drive that stretch every day… no where to go if something goes awry. My deepest condolences

I’m disgusted by the amount of casual drunk driving that goes on.

They think they are such good drivers that they won’t crash. But what about what another driver makes a minor mistake and you can’t react to avoid an accident?

You got it, just one puff, just a couple xanax , its all good. Keep popping them meds and hitting the road.

Thanks for eluding to the fact that “driving under the influence” does not have to involve alcohol. So many of the comments below draw an assumption that DUI means excessive alcohol consumption.

I’ve seen people sitting in the driver’s seat of a car in the parking lot of a grocery store smoking a joint like it’s a cigarette.

I’m convinced that there are a lot of people driving around the Eureka/Arcata/McKinleyville area that are flying high on meth.
And then there’s heroin…

Not god
Reply to  Buster

Well when cops say alcohol is a factor .and they arrested her for dui .I think they might of took a test to see if she was using alcohol. In every news article they say she was drunk hopefully She lives so she can get what she deserves . I’m not God and I shouldn’t judge . But she took a young life for no reason . Because she wanted to drink and drive.

This was somebodies Son, Brother, Grandson, nephew, friend who was very much loved. Like all of you haters have lived completely perfect lives. Don’t think so. Sadly he paid with his life.

I feel the same way . I am the mother of the other driver.boy I could go on. I cant find out what’s happening to her.my son and they wont help me

Likely too much drinking at the casino. Horrible driving there all the time, but more often closer to the northbound onramp.

Same ole haters, but y’all have a different subject to hate on now.
You don’t know if alcohol or donald Biden has anything to do with this tragedy

North West, if they arrested her for dui it is a good assumption alcohol was a factor.

Not god
Reply to  Neil

You must be confused, or you just failed to read the article. “Impairment is being investigated as a contributing factor in this collision and Ms. Ruvalcaba was placed under arrest for Misdemeanor DUI charges related to the collision.” Bringing politics into this tragedy is absurd.

Not god
Reply to  Humboldt Lady

They arrested her for dui. Driving under the influence do you know what that means.

Thanks for the condolences

From a close friend of the person that was killed, and out of respect for the family of both involved please keep negative opinions off the internet. People made mistakes yes, but unless you know what happened please do not assume. Both families were given devastating news today, last thing they need is for their loved one to be bashed online and read it.

My family is very close with Tiannah and yesterday was one of the worst days of all of our lives. So please everyone try to be respectful and have some compassion

What would be respectful and compassionate would be to not take negligent actions that kill other people.

Honestly.
To be clear.

Picking up decaf chai, or fat-free half-and-half are “mistakes.” And in some instances downright tragedies.

But to minimize intentionally ingesting a significant quantity of alcohol (doesn’t take that much to deem you impaired) and jumping behind the wheel of a motorized vehicle as “people made mistakes” is a laughable, pathetic reflection on your character. Please don’t insult our collective intelligence.

Additional snickers to be had at “keep negative opinions off the internet.” It’s the internet. No one (really) cares . And its reputation as a dumping ground for vitriol (my own included) is unphazed by your request.

Best to just look away
And within .

You should probably let them determine whos at fault before you bash her. Yes she survived and the other did not, that does not mean she was at fault! One of my nest friends died yesterday, but until we know the facts, do not assume. I feel bad for her, she is going to be bashed on here and in life forever along with her own guilt she will feel and we dont even know the specifications yet. So everyone needs to have a little compassion for all involved.

Im very sorry for your loss. The fact that you can be that understanding with what you are going through is truly amazing. My heart goes out to you and the friends and families of everyone involved.
I truly hope that everyone can learn from this just how much the decision to drink and drive can take from us.

Nothing changes the fact that my son is dead and I will never be able to see him again. Or unsee what I saw

I’m the mother of the man she killed. You have no idea how I feel

Not god
Reply to  Kim lourenzo

Kim 30 years ago my baby die .I do know how you fill it may have been 30 years ago but it was like yesterday. One thing I think about when I think of him is that god takes the good ones .and I knew your son very well .I loved him. He was a good kid with a kind heart I will never forget him .so when you fill down think he doesn’t want you feeling bad he wants you to be happy. Just remember hug your other son and tell him you love him and this goes out to everyone because you never now when it will be the last time you see them.hes a piece now .

Pissed off
Reply to  Jessica

I’m very close to the death deceased family. So what now.

Not god
Reply to  Pissed off

This is childish grow up…..

Totally understand wanting the compassion .at least tiannah is still alive. My son isn’t. So don’t be huffy and high and mighty. Nothing g will change what happened. None of this.

❤️. Brokenheart…Thank you for your kind and thoughtful comment,

Your welcome, my heart goes out to her and her family as well.

So yeah, seat belts, head lights on, and DON’T trust ANY other drivers especially near the darn casino!

Anyone know what color mustang?

The first reports over the scanner said that it was red.

It was red, the person who passed in the accident was a good friend of mine. He was like a brother to me. This all seems so surreal!

I feel sorry for both people !!!
For what ever reasons No One Wins Here …. No One!!!! Somebody lost a loved one. And to the person driving has years of remembering what she caused!!!
But of course people are keyboard warriors and just say mean & hateful things… I understand that , but to just keep running your mouth is plain stupid , it don’t change the outcome!!!! Just pray for forgiveness

No where does it say she was at fault. One of the cars crossed over. Does not make it her fault. This was a young man I have known for 20 years that passed. But before we know the facts we can’t blame her. She wasn’t drunk or this would of been a felony DUI.

Well it wasnt your loss now was it.you didnt know him as well as I did.anyway shut up keep your crappy comments off here and I bet you your wrong . He had a straight road . I’m tired of all u high and mighty people you o viously didnt know him that well and really dixnt know who he was. He has went through alot ,learned what he wanted out of life and waS the best damn driver u ever saW. Do me a favor dont come to is funeral.be o obviously never needed u as a friend .no where does it s ay it his fault. U r no friend

Your statement is uneducated

Well it wasnt your loss now was it.you didnt know him as well as I did.anyway shut up keep your crappy comments off here and I bet you your wrong . He had a straight road . I’m tired of all u high and mighty people you o viously didnt know him that well and really dixnt know who he was. He has went through alot ,learned what he wanted out of life and waS the best damn driver u ever saW. Do me a favor dont come to is funeral.be o obviously never needed u as a friend

Well it wasnt your loss now was it.you didnt know him as well as I did.anyway shut up keep your crappy comments off here and I bet you your wrong . He had a straight road . I’m tired of all u high and mighty people you o viously didnt know him that well and really dixnt know who he was. He has went through alot ,learned what he wanted out of life and waS the best damn driver u ever saW. Do me a favor dont come to is funeral.be o obviously never needed u as a friend

Kim lourenzo
Reply to  U know

You could do us Ll a favor and keep your smart ass comment to yourself.obviosly not a friend

I don’t think you know the surviving party then. But glad ur opinion is public. *uknow*

You know this doesn’t do anyone any good. The good or the bad comments and it tends to just make me angry.i will never be able to hug or talk to my son again. He battled with cancer twice himself and lost the love of his life to cancer. For him to conquer all that and know what he wanted out of life was simply amazing. He was one of the best people you would ever meet. Anyway I’m terribly hurt but beingmezn to tiannah doesnt help. Although I can never forgive her for taking my son from me. Just hope better choices will be made in the future

Tiannah none of this does anyone any good. It is and was an accident and nothing will change that. As I am his mother I will always feel the loss. We all take our chance driving on the road anything can happen. I am sorry for all the bad things said to you.

I’m sorry Kim. I don’t know you or your son. I just happened to read his obituary today and did a little research. I can see that he must have been an amazing person and judging by your last comment he must have gotten some of that from you. My condolences to you and your family. It seems there aren’t a lot of people with hearts like yours left in this world.