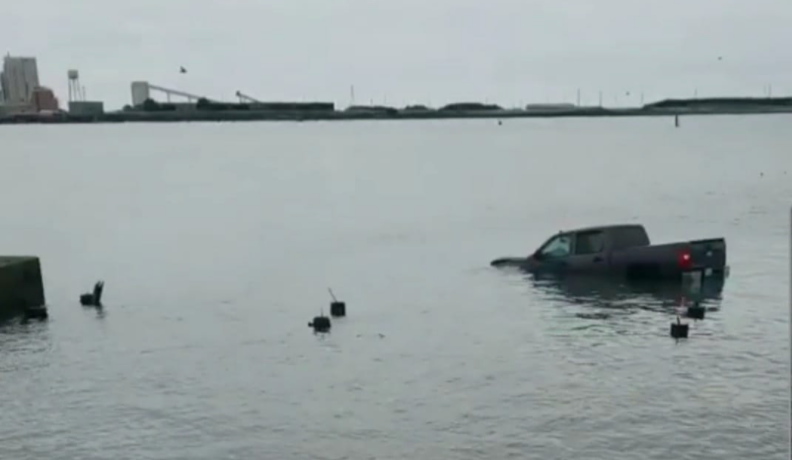 Just before 2 p.m. yesterday, a man drove his Chevy Silverado into Humboldt Bay near the Wharfinger Building in Eureka, California. The situation nearly ended tragically for the man who reportedly was the victim of a medical incident. A woman in pink, a man in his sixties, and a YouTube Celebrity famous for creating bounty hunter videos worked together to bring the victim to safety.

According to Patty Mayo (AKA Patrick Thomas) the YouTube Celebrity, “I was sitting in my boat about 500 feet east of where the incident occurred…I saw this woman with a pink shirt running into the water.”

Mayo said he soon realized that a vehicle had gone into Humboldt Bay and the woman was attempting to rescue the occupant.

One woman, Samantha Franceschi, described on social media seeing an elderly man, “for reasons unknown, accelerate…to a high rate of speed and end…up in the bay.” She wrote that the incident happened quickly. “[The] silver Chevy pick-up floated out a ways, slowly sinking,” she added. “Next thing I know the lady in pink was swimming out to assist and was able to get him out. Another person, gentleman, swam out to assist as the truck fully submerged.”

Multiple people on social media commented that the woman in pink was a hero as she jumped in quickly and made her way to the pickup that was sinking. Mayo agreed, “I’ll bet there were twelve people out there, but she was the first to jump in.” 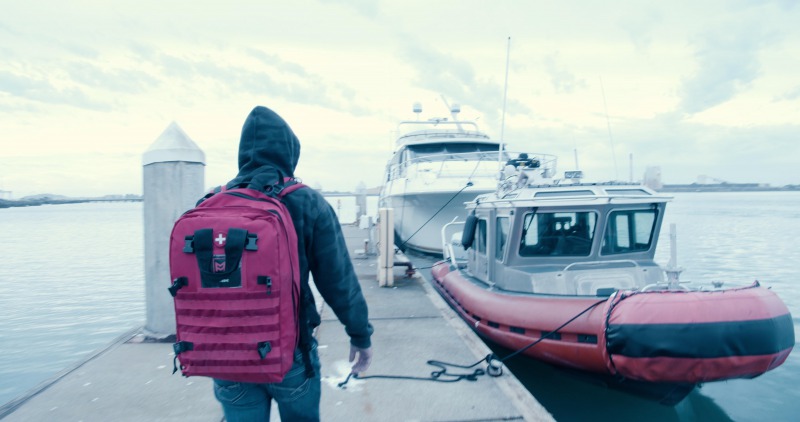 Somehow the woman in pink and a man who Mayo described as being in his 60’s managed to get the elderly victim out of his pickup and onto its roof. “If they didn’t grab him he would have been drowning,” Mayo explained. “They got him just in time. They were able to stand on top [of the pickup]…I was able to give them a line.”

He added, “Those two Good Samaritans were out there in some cold, cold water.”

When Mayo got there, he said the woman in pink had already learned that there were no other occupants of the truck. “The victim was bleeding from his hand,” Mayo said. “He couldn’t talk, but he was able to shake his head that no one else was in [the pickup].”

Mayo helped the two Good Samaritans get the elderly man into his boat. “He was incapacitated,” Mayo said. “We brought him over to the dock.”

There emergency medical personnel examined the victim and Mayo said, “They thought he was in the middle of a stroke.”

An ambulance took the victim to the hospital. At this time, we don’t know how he is doing.

Paddy Mayo told us that he is currently traveling through Eureka for the first time. He said he lives on his yacht and works on his YouTube channel. According to Mayo, “I did a scripted bounty hunting show in Oregon and then later a real one in Denver.” Now, he said, he’s doing a documentary series about living on his boat.

He’s currently enjoying the beauty of the area. “This is a real chill place, then all this crazy stuff keeps happening,” he marveled explaining that his “truck,” a fully armored F550 personnel carrier, (yes, you read that right) that he bought instead of a Lamborghini because “it was more appropriate for the times” was broken into by woman just a short time ago as he was staying on the Humboldt Bay. “The police came and arrested her, but I didn’t press charges,” he told us.

Mayo said unfortunately he didn’t have the cameras rolling to capture this latest adventure rescuing the elderly victim. Instead, he didn’t even have a phone photo because, “I ran out so fast that my phone dropped on the dock.” He said he left it laying there because he didn’t want to stop when time might be of the essence. Luckily, it was still there when he returned.

If you want to learn more about the heroic woman in pink, unfortunately, at this time we haven’t been able to locate her, but we’re hopeful she’ll contact us as by all accounts she was quick thinking and brave.

UPDATE: ‘We didn’t have fear; we just went and did’: Woman in Pink Describes How She Saved the Man Who Drove Into the Humboldt Bay

Glad to know that there are such caring people here in eureka who risk their lives to save others. Touching.

yes. I am very happy about that too. But i mean that is so cool that THE PATTY MAYO WAS THERE an hour before me and my grandma went there at 1.

Mayo and his troop are hilarious and professional at the same time on their Youtube channel. Laughed all morning.

Patty Mayo, are you saying the Chevy went into the bay near the Del Norte Pier?

It went in to the left of the Wharfinger building.

Strong argument for parents making sure their children all learn how to be strong swimmers! Yay ! Lady in pink!

Just wanted to thank everyone for saving my dad! Yes, my dad. I live in Arizona and got the call Saturday that he had been in an accident due to having a stroke while driving. You are all heroes to me and our family. You are amazing folks and we are very appreciative of your quick actions! My dad has been released from the hospital, and is doing well. Thank you for being there for him when we couldn’t be!!!

“he marveled explaining that his “truck,” a fully armored Fi50 personnel carrier, (yes, you read that right)”

If I read that right, it’s probably wrong. Unless there’s a new kinda truck called an Fi50.

Yep, I must have heard the numbers/letters incorrectly. Here’s the photo in case someone wants to research the actual model of Inkas it is.

The vehicle is a 2020 INKAS Sentry, this particular one being the “Civilian” model.

Most likely a Ford 550 frame. Cool rig for a bounty hunter.

Lady in pink you are our hero for the day. Your fast and brave actions saved that mans life without question. Risking your life to save another without giving it a second thought is just amazing! We need more caring people like you that are willing to help folks in need. THANK YOU, and God Bless you.

Hero in pink: I looove that you were fast thinking, fast acting and rescued someone who’s probably a total stranger to you, in the freezing January bay, that you’re a woman and that you were wearing pink!! You Go Girl!!

Hero in pink, don’t be shy. Stand up and accept your well-deserved applause. Please. My hands itch to clap for you.

We must find the Lady in Pink!! I love her!!

Guest, we need to respect the Lady in Pink by Not outing her. Some folks prefer to be quiet heroes.

Bounty hunter who doesn’t press charges. Only in hippy Humboldt (or Oregon, or Colorado). He belongs here. Run for county supe, bounty hunter! Then you can continue the illegal lockdown and like Sheriff Billy never press charges.

Kudos to all involved! 👏

I would like to hear more about this woman who broke into a fully armored F550. That sounds like an interesting story.

It is kind of funny but, I’ll leave that to Patrick to tell.

More more more!! This is great stuff…I hope this guy & the Pink Gal stick around here for awhile. They are assets to the community & great humanitarian examples . Good for them. I hope the older man survives his ordeal.

Great job to all three. Definitely heroes. That was some frigid water I am sure.

Patty mayo is a punk you ever watch his videos check em out before you want praise such a asshole..just sayin ..lol

Guest
Guest
Reply to  The elixir

My thoughts exactly. Wouldn’t be surprised if he paid the guy to “accidentally” drive into the bay so he could be the hero

The victim is in the hospital with a stroke, according to his daughter.

He definitely did not pay my dad to drive into the freezing water… please accept that this man did a brave thing by helping my father out of the water.

Sir, I think you are probably referring to the scripted series of videos. When on set, I’m an entertaining asshole but when I’m doing the job for real I care about people and treat them with respect and do my job professionally.

Guest
L
Reply to  The elixir

They are scripted and pretty much the same. As he said he was in Oregon for a scripted show and a real bounty hunter show in Colorado. Basically he’s an entertainer. Happy he was there to help the Real Hero, Lady in Pink.

God bless you lady in pink, older gentleman and Paddy Mayo. The world needs more people like you. Speedy recovery to old guy in truck!

Shrooms are legal in arcata

You are not silenced…yet…but if you keep using t...

Answering your question here: No (the answer is No)

No Cases of New COVID Variant, Omicron, Found in the U.S.

Farce, I’m having some issues that I need your help wi...