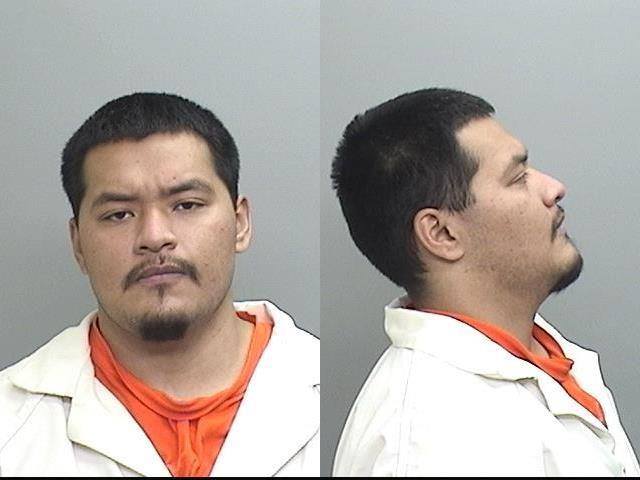 Covelo man, Samson Musselini Joaquin, was booked into the Mendocino County Jail on November 20, the day after Round Valley residents Traci Bland and Kevin McCarthy disappeared, and now faces charges of kidnapping and assault with a deadly weapon other than a firearm in connection with the couple’s disappearance.

Traci Bland and Kyle McCartney were said to have been attacked by four men on November 19 after arrival at an Oak Lane property in Covelo. Four days later, two bodies were discovered alongside rugged Hulls Valley Road north of Covelo.

These charges mirror those of Covelo man, Joseph Hoaglen, we wrote about earlier today, implying these two men could very well be part of the initial group of four men that were said to attack and assault Kyle and Tracy.

Regarding the charging of Joaquin and Hoaglen in connection with the deaths, Captain Van Patten said, “Detectives believe they had enough probable cause for the additional charges at this point, and the DA will have the ultimate decision on if charges will be filed.” He said that California District Attorney’s are required to submit criminal complaints within 48 hours so “we will know soon.”

According to an April 2020 press release, Joaquin was arrested and charged with domestic violence battery after allegedly attempting to choke and hit his pregnant partner.

Don’t name your kids after Musselini

good catch theallone, it is misspelled, but yeah, not a good name to tag your kid with. (unless it means something in Yuki…)

Come on now all kind of people name there kids Mussolini not just the Native American. Have some sense people.

Its on you district attorney
Reply to  thetallone

District attorney its on you to keep these cowards in jail and hand hefty sentences of life with no parole. These people will do this again if you dont. Make an example out of someone already to show criminals cannot get away with this. The people of covelo are living in fear because of these people. Its not right. Everyone is watching very closely how the sheriff and district attorney handle this case. The criminals will see they can truly get away with anything in covelo if these people aren’t sentenced to life in prison.

Let the heads roll. Wont be long before another two amigos are on the docket. These rats will spill the beans on each other. No doubt we look tough but love a long talk and walks on the beach.

Is this some dark humor on your part? Apparently Ms. Bland was beheaded. This is why the female body has not yet been identified.

I don`t know if the head has been found yet.

So, I’m just wondering, how do you know this? Is this speculation on your part, or do you have an in with LEO? They were not found for a few days, and we all know that in the woods things happen to bodies. Also, please remember that her family and friends might be reading this. Can we please show a bit of tact and discretion? Thank you.

Pigs are so F’ing cute.

A man who beats a pregnant women is certainly a prime suspect for the homicide of another woman. [edit]

There is already a genocide against the Wailaki and Yuki peoples which has been happening since the 1850’s in and around Round Valley – Covelo.

North Korea does it now. Communism, socialism, Bidenism, all the same.

Its just sounding silly now. Time to put on your big boy pants and move on.

Yeah trumpism/fascism is so much better.

Bidenism?! You must mean “birtherism” when you express your racist views by accusing Obama of not being born-in-America with zero proof whatsoever. You refuse to apologize when disproved because you have zero honor and zero honesty. That would be Trump, Vlad’s Vassal. Putin’s Punk.

That is one of the most ignorant and Un-American comments I’ve ever read on this website. Everyone deserves a trial and no one should be punished for the actions of their family members if they have no personal involvement.

Yeah , kill the pregnant woman for getting beat up , That sounds really fair…Why don”t you move to Saudi Arabia if you likethat shit.

Mr. Doakes – You, sir, have some very dark thoughts.

I see my comment has been deleted for reasons I don`t know and my ideas don`t seem to be popular.

So….Answer me this: How is our present mess working out? Things getting any better….Hmmm…… Do you have a better idea? How about more social workers? More diversity classes? How about higher taxes & more laws & regulations? We`re just a few cents more taxes and a couple of more regulations away from a socialist paradise……. Oh, and let`s bring in more “immigrants”, that will make things a lot better!

@Joseph Doakes You must be a racist

It doesn’t matter what your great-great-grandparents went through today is today. Now is now. We are walking in a different world. These games these boys play they act like they’re living a video game that they can just kill people shoot people drag people around burn them rape them whatever. Anything goes. Um… problem is in reality you don’t get another life. You don’t get another chance. Somebody’s not coming back the next time the games turned on. You can’t change your mind and turn it off for a while. It’s all done the deal is sealed.

Entering a World of Pain

“Grizz” was in SQ 2010 or 2011. Amazing with the recent crimes he’s committed including armed robbery & felon in possession within last few years he was allowed to walk the streets to now apparently commit a much worse atrocity. I’ve done time but some people are irredeemable

Was the murder of two Caucasians somehow genocide? Or are you referring to the arrest? Or maybe the release of this violent freak to commit more crimes on the rez?

What biz did the decreased have with these fellows? Birds of a feather…?

Thirdeye
Reply to  mlr the giant squirrel in Eureka

Rumors circulating from social media that it was a small pot deal gone bad, and the victims weren’t exactly nice people either.

Forget, race, location, age, sex ,upbringing, and all other crap, a thug is a thug. Most will never reform, or care to. When everything is everyone else’s fault, and you blame your problems on past deeds, you will never move forward, and are a blight on society!

Boom, you nailed it in three sentences.

You might be right, but why everyone think that only Native American are the bad people. Every race out there do sad and terrible things.

Well a man come on the 6 o’clock news Said somebody’s been shot, somebody’s been abused Somebody blew up a building, somebody stole a car Somebody got away, somebody didn’t get too far yeah They didn’t get too far Grandpappy told my pappy, back in my day, son A man had to answer for the wicked that he done Take all the rope in Texas find a tall oak tree, Round up all them bad boys hang them high in the street For all the people to see That justice is the one thing you should always find You got to saddle up your boys, you got to draw a hard line When the gun smoke settles we’ll sing a victory tune And we’ll all meet back at the local saloon We’ll raise up our glasses against evil forces singing Whiskey for my men, beer for my horses We got too many gangsters doing dirty deeds Too much corruption, and crime in the streets It’s time the long arm of the law put a few more in the ground Send ’em all to their maker and he’ll settle ’em down You can bet he’ll set ’em down ‘Cause justice is… Read more »

Dude looks like a good candidate for the social work dept at HSU. He has the back ground for a NPR eight hour series on , finding Jesus in jail, getting bail, probation, and a free ride to a Masters. Woke for me

Guest
Reply to  mlr the giant squirrel in Eureka

What I have learned from past murders in Covelo is that no one talks to the cops.

But they’ll sure complain about unsolved murders, as long as it’s one of “their own.” Probably going to be no complaints if this one stays unsolved.

The world doesn’t need this scumbag on it anymore

How does the conversation of a possible homicide turn into a political quest for answers? Please show some respect for the deceased and the loved ones left to unravel the truth so they can move on with their lives. Bad decisions have been around since Adam and Eve apparently we have learned little. Hopefully the truth will prevail and put an end to speculation and closure for those left behind.

Half these comments got nothing to do with this crime. I’ve only lived here a while. But from what I’ve read, this happened over a small pot deal. Really, to kill two people over something like that says these people have no respect for life. Nobody deserves this for stealing. Someone said they werent good people, well neither are the ones accused. And just like most minorities, they dont want nothing to do with the police and there relatives are innocent or are being accused unjustly, until it happens to one of them, then it’s the police aren’t doing enough. Why can’t it just be murder is murder, if you are quilty you need to be punished and keep all the bullshit racist shit out of it.

Man how False rumors going around. New storyline every time I read these comment. No one ones what happened then. I hear two junkies died over drugs and wasn’t there 4 guy involved not six so crazy how it went from 4 to 6 now it’s the Covelo 6