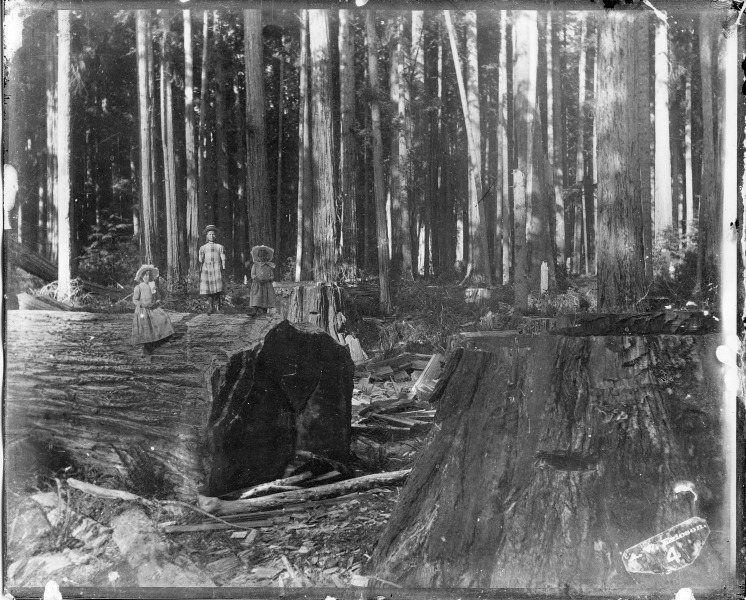 Three young girls posing on a redwood log in the forest near Trinidad. [Photo from the HSU, Humboldt Room, Palmquist Collection by Ericson]

Odd Old News has a fondness for the odd human interest story. This week we will take a look at the “home-schooling” of some unusual children who lived five miles east of Ft. Bragg. Specifics about their homestead location are unknown other than knowing that the family lived six miles east of Ft. Bragg in the dense redwood forests of the coastal redwood belt, apparently arriving around 1884.

Most settlers believed in their children getting an education, but distances from schools sometimes prohibited attendance, or necessitated long travel. These two isolated children had the kind of natural education that comes from living in Nature, and created their own language to navigate their natural world.

MOUNTAIN CHILDREN
BABES COULD TALK SPAKE WITH WORDS THEIR PARENTS KNEW NOT
Their Language Was Unique Unto Themselves —A Very Remarkable Story
Los Angeles Herald, April 1, 1880 (originally published in the Washington Post)

In the redwood forests of the mountains of the Coast range in Mendocino county, six miles east from Fort Bragg, stands a cabin with neatly fenced garden and corrals. It is the home of two children who have built up a language. They are children of well bred, educated parents, who have been too busy hewing a livelihood out of the forest to give the little ones even enough of their society to teach them to speak.

Sixteen years ago George Hicks and his young wife came out from the east to find a home where the new west offered, as they thought, wider possibilities. They had a good sum of money to invest, but, like thousands of others, Mr. Hicks was not sharp enough to keep it. With two horses, some cows and chickens, the young couple went by boat up the coast to Fort Bragg and thence struck out into the primeval forest to take up the nearest untreated government land. The redwoods offered them a home and a livelihood, but great labor and little profit. They were destitute of everything but love and hope, and the husband’s ax sang out merrily and soon there was a cabin in place of the hollow tree they had first sought shelter in. He added stables and fences and a garden, and his gun supplied plenty of venison and quail and grouse, and they were able to welcome their first little son to a comfortable home. When Frank was three years old his parents rejoiced to give him a baby sister, to be a companion for the boy, who, before, played alone all day under the trees. The baby, Mollie, was placed almost from her birth in the boy’s charge.

Mrs.Hicks isolated her children from the rough contact with the Indians and as they must all eat at one table by the laws of the western usage, she placed a little table at one corner of the porch and here the two children ate the meals they did not prefer to carry off into the woods. Almost before the baby could walk Frank carried her beyond the green open [sic] on which the house was built and to his favorite nooks in the forest, and she slept her midday naps safe in a great house-like hollow tree. The rain in the tree tops, the smoke of forest fires, the white fog floating dimly in from the ocean, the gray whisk of a squirrel or the blue flash of the chattering jay, each had a meaning for the boy, and how could he convey that meaning to the little sister? There was no one to tell them the accepted word to express the forest sounds and life, and, naturally enough, the little ones invented a language of their own from the sounds they knew, and that language is a true language and has nouns and pronouns and verbs and adjectives and adverbs.

More than that, their words are almost identical with the root words of our language. Take, for instance, “phin” for fire or heat, which is identical. Sin is fig, and on is done, think is horse, boo is cow, wala is squirrel, and wa is to run, and wawa to fly. Jaho is the redwood, sava the fawn, mosa the doe; jawawa is the rabbit.

Their voices are soft and their language is the vocalized type of the forest where they have grown like two little squirrels, healthy and happy and gentle. They are not savages. They have distinct ideas of right and theft is to them the greatest conception of wrong. They learned it from the birds when saw a wicked thief help himself from the hardly gathered store of the woodpecker which they had watched carried nut by nut from the ground to a hollow tree.

Mrs. Hicks noticed that the children did not speak in English, but thought it was the usual prattle of babyhood. She tried at spare moments to keep the little ones near her, but they spoke in a language which neither she nor her husband could understand. It worried her and amused their father, but when a school was opened at Fort Bragg, Mr. Hicks presented himself to the young school ma’am with Master Frank, who was to ride the six miles to and from school on an ancient Mexican pony.

The boy was 8 years old, but he had never seen any child but his sister in his life before, nor any woman except his mother, for his home was separated from the world by the silence of the Redwoods. The boy was impressed by the novelty, but could not understand what was said to him, nor could he make the children understand him. The teacher was patient with him, for she could see he was an unusually bright boy, but she could not do anything with him and on Saturday rode through the forest to his home and consulted with his mother. Little Mollie’s devotion to her brother and his protection of her suggested to the teacher to make her a little pupil at school as a balance wheel to her brother.

They run away occasionally, and still talk in their own language when alone, but they are rapidly becoming proficient in English.—Washington Post.