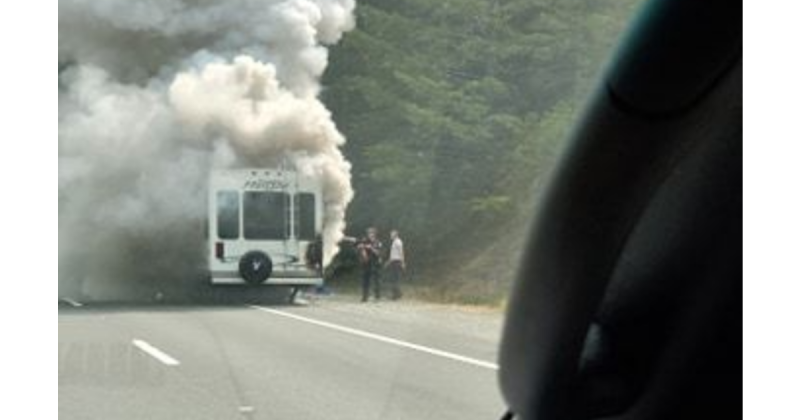 Smoke boiling from the vehicle. [Photo from Jason Daniels]

Multiple agencies are rushing to just north of the Salmon Creek exit near Miranda after a fire broke out in a trailer being pulled by a GMC pickup at 1:09 p.m.

According to the CHP, the outside (number 2 lane is blocked) as the trailer contains “a large amount of ammunition.

There have been several explosions and fire is spreading to the vegetation.

UPDATE 1:36 p.m.: Northbound lanes are blocked and traffic is being diverted off the road at Salmon Creek, according to the CHP.

However, firefighters have kept the flames from spreading further into the vegetation. The crew from VFD were the first on the scene, according to Mark Swizee who was passing by. [UPDATE: We have confirmed that this was Myers Flat VFD not Phillipsville] He said that they kept the fire “from spreading and ammunition from going off.”

Swizee says this was a “trailer with lots of guns and ammo .” 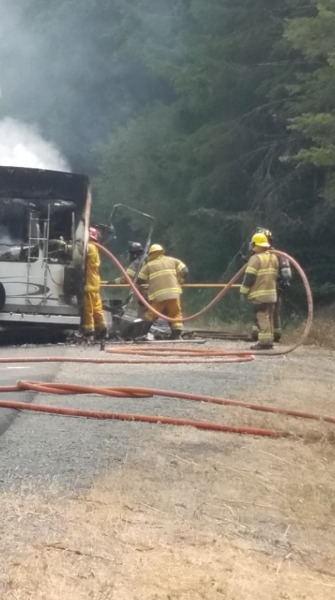 UPDATE 1:53 p.m.: The fire in the vehicle has been extinguished. Traffic is now being allowed but lanes are coned off. Please be careful in the area.

UPDATE 4:21 p.m.: All northbound lanes are open. One southbound lane is closed.