[UPDATE 8:36 p.m.: From 0 to 22,000 Acres in Less Than a Day, Phenomenal!] Fire Near Slater Closes Hwy 96 and Forces Evacuations of Happy Camp and Surrounding Areas

A fire that began this morning before 8 in Siskiyou County is forcing evacuations of the town of Happy Camp as well as surrounding areas and has shut down Hwy 96.

A post made at 3:08 p.m. on the Siskiyou County Sheriff’s Office Facebook page states, “An EVACUATION ORDER is in effect for the entire Happy Camp Community. EVERYONE NEEDS TO IMMEDIATELY EVACUATE THE AREA ASAP.”

Smoke from the fire is blowing into Gasquet and Crescent City making the areas almost as dark as at night, according to witnesses in the area. 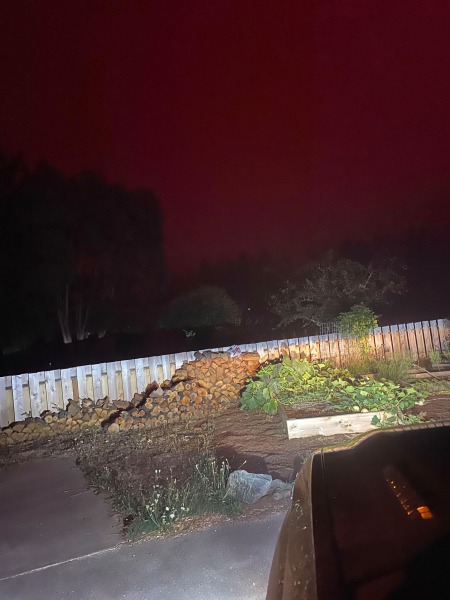 The skies are wine red in Gasquet. [Photo provided by Gasquet resident]

UPDATE 8:36 p.m.: Klamath National Forest tweeted, “Slater Fire is currently at 22,000 acres in size. A number of evacuation orders have been issued for various roads in the area as well as the community of Happy Camp. For the most current evacuation information refer to the Siskiyou County Sheriff’s Facebook.”

Rather apocalyptic. It’s dark, hard to breathe. And I feel so sorry for those souls who have no power, much less those direct threat of fire.

This is terrible! Does anyone know the status of Hwy 199 between Grants Pass and Crescent City? Prayers to all affected!

Per Caltrans quick maps 199 is open.

Grayback out of Happy Camp is closed.

We are heading that way from crescent city… It’s dark and ominous… Very smoky
. I hope we will be ok!

Can you get through?
Thanks.

Curtis
Reply to  Gimmie a break

The 199 is closed at the bugg station

Here is a photo from south of the fire.

Praying for the folks in the small mountain town surrounded by the amazing Klamath National Forest. Thanks Kym.

Retired CDF here. Fought fire in that same spot back in 88. Happy Camp Lighting Series then

I’m over the hill in Old Shasta.

The wind is howling, but it’s only 98 degrees.

The local bare bones fire crews are over extended. Too many fires, not enough trained fighters.

Fire starts are springing up at the rate of 2 per hour.

From RVEMS’s first official school day (where we were to hand out chromebooks and packets):

Google is pure evil so no Chromebooks is a GOOD thing. Get the kids reading and writing. They do not need craptops. No one did until a few years ago. America did just fine with the bible and a basic primer.

B
Reply to  Pilgrim Son

The hell are you talking about? 😂

I-5 is closed from CA border to Gold Hill. 199 is open through Cave Junction.

It was absolutely insane to drive through. The colors where unbelievable. I hope everyone evacuated safely… this was 20 mins before it blacked out. The sky turned a dark dark red I can’t even explain it.

If anybody knows how far the fires have spread, i am Interested I’m keeping up. Not from around the area, was just driving through

thank you for GIF

Does anyone know if all residents are out of Happy Camp?

My sister just lost her house and my nephew as well lost his house in happy camp but both families escaped and are alive thank God.

Burnt my whole neighborhood to the ground.
Every house but 3 upstream of Indian meadows were incinerated.
I tried to get out grayback to cave junction but it was a wall of flame on the California side.
They entire stretch of Indian creek road was decimated.
Downtown is standing so far, crews seems to be focusing on trying to save town.
The wind this morning was outrageous.
We didn’t stand a chance

So sorry to hear that, that’s terrible.

I am so sorry. Is there something we can do to help?

Do you know anything about the gentlemen’s house that live at the end of airport road?

Chcuk U
Reply to  Canyon oak

I am truly hurting for you, facing my own questions.

I might post this again so that people might keep their eyes open.. Not saying this fire is caused by arson, but I think it’s more common than anyone wants to believe. I think we have a lot of copy-cat arsonists whenever a large fire or series of fires breaks out- whatever it’s caused by. Here’s a sampling of brush and wildfire arson arrests and investigations in California alone since May 2020. This is just what made the news.. I didn’t include arsonists who “only” set structures on fire, or stupid accidents like the people that set the Creek fire with an incendiary smoke machine at a party. In some communities in California people have formed formal “arson patrols”. They take turns watching from ridges and talk to people lighting campfires or whatever. ——————————— Sep 8, 2020 https://www.kron4.com/news/bay-area/man-arrested-suspected-of-lighting-fires-in-marin-county/?utm_medium=referral&utm_source=facebook.com&utm_campaign=socialflow NOVATO (BCN) — A 55-year-old transient was arrested Monday evening on suspicion of multiple counts of arson, Novato police said. September 4, 2020 https://www.chicoer.com/2020/09/04/paradise-man-arrested-suspected-of-starting-series-of-fires-in-stirling-city/ PARADISE — A 32-year-old man was arrested Thursday afternoon on suspicion of arson in relation to a series of fires started in Stirling City. May 23 2020 https://patch.com/california/concord-ca/arson-cases-concord-man-faces-arraignment-soon Concord. Joshua David Smith, 38, was arrested on suspicion of… Read more »

What would motivate someone to do something like that? That is infuriating.

My dad, George Thorward, lost his house on Indian Creek Road and his girlfriend, Kathy died in the fire. He barely got out with his life. He made it to Eagle Point and now might need to evacuate again. It’s a nightmare. I hope everyone in HC gets out safely!

I pray this isn’t true but scanner traffic is saying Slater Fire is now 22,000 acres. If it is true by 8am tomorrow it will probably pass the Creek Fires record of 37,000 acres growth for the first 24 hours. I still find it hard to believe a fire has gone from 0 to 22,000 acres in 12 hours.

It is official. I’m just getting ready to post. “Slater Fire is currently at 22,000 acres in size. A number of evacuation orders have been issued for various roads in the area as well as the community of Happy Camp. For the most current evacuation information refer to the Siskiyou County Sheriff’s Facebook.” https://twitter.com/Klamath_NF/status/1303518380817747969

It’s actually 22,000 acres in 12 hours, and expanding rapidly. By tomorrow morn it will be much more. But it’s not just the Slater. All the fires across the state right now are moving at speeds never before seen. FF”s and civilians are being trapped right now by these fires. Please, if someone is given an evacuation warning, consider it mandatory.

It was outright night down here in Smith River at three this afternoon. You couldn’t see the sun, but there was an orange glow from the direction of the ocean… as though the sunlight on the Pacific were reflecting up from the water instead of beaming down from the heavens.

Ground me to a dead stop. That’s for sure.

I’d been worrying about the terrific wind this morning during red flag weather, which immediately makes everything much drier, and had to ask the postmaster what the heck was going on. He listed off a scary number of fires, but none of them threatening to do more than choke us to death. The one good part was it stayed a lot cooler here today. Breathing would have been nice, but at least I wasn’t a molten blob of sweat.

This is just horrific. I think Lynn was right to voice suspicion.

Please someone needed badly an update is downtown happy camp still standing!!! My mother and our family are awaiting news in a hotel in yreka praying our house is still there to go home to tomorrow… Downtown happy camp please any news would be greatly appreciated… I’m sorry for all those who have already lost this battle for hope but no matter what everyone must pray and pull through this … Together we just want to go home…

Updated an hour ago.

Thanks for the heads up on the site!!!! I owe you one! Were gonna leave now.

I heard that the fire changed course as it entered the Meadows (a neighborhood just north of Happy Camp) so most of the homes there were spared including mine and my son’s. The church burned and a few homes. Fire then went west toward Benjamin Creek. It did not enter Happy Camp near the market. Hope it will stay away. I credit my prayer warrior friends and give the glory to God. The church that burned was not being used much at this point. I also heard most homes north of the Meadows burned but a few were spared. My daughter probably lost her home.

Almost all the homes up indian creek past Georgia flat are toast, the grim scene lined the road as I drove out after everything had burned.
I have also heard the meadows subdivision was spared.
I can see it now, coming around behind the dump and chambers flat at a calmer pace, Heading towards Benjamin creek, still behind the closest ridge from my position.
hopefully kingfisher market can survive, and I don’t know if buckhorn road area is under fire or not.
In the distance across town to my north, It looks like it might be dropping down into ranch gulch off the mountain pushing towards the river.

So, you are crediting god with sparing your home and taking other homes and lives ?

I believe the statement says she is giving glory to God. Not crediting God. If you want to hate on people with faith that is your business but don’t quote them and then twist their words. There is a great amount of suffering right now and some people take comfort in their faith. It seems You would rather fuel the misery by showing everyone how much you hate God. Man was created in Gods image so take a look in the mirror and think about what you really hate.

This is outsidE my sisters home in Gasquet

This was 3pm outside my house in Gasquet.

I can confirm that Indian meadows subdivision has been destroyed, I just saw it

Yes I spoke too soon as fire came last night and destroyed my home and most of my neighborhood. Cool to see the pastor’s home survived with a pretty green lawn amid all the destruction. Life goes on. I’m feeling optimistic about the future and even grateful I no longer have to renovate the old mobile home. I can start over with something new.

I live in Big Springs. I have a 19 ft trailer for a family or one person. Also room for horses and animals. I have a kennel out side with cover. Also a kennel in our house for cats. At this time no running water to trailer but electricity and we will fill tanks to have propane for cooking. Vickie. [email protected] Leave your number.