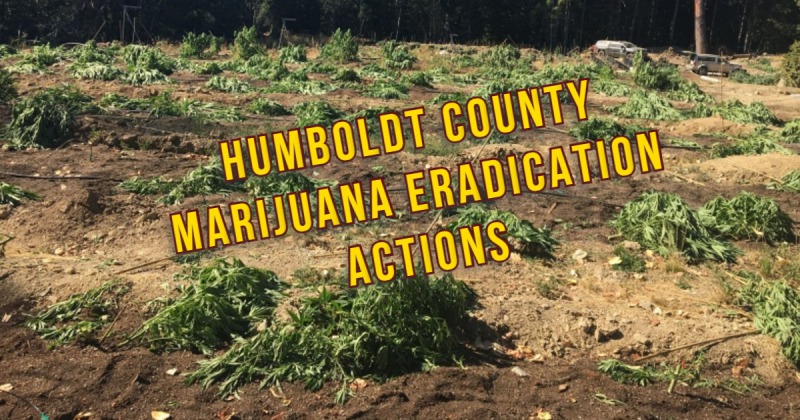 The Humboldt County Sheriff’s Marijuana Enforcement Team “served a search warrant on multiple parcels in the Shelter Cove area today,” according to Samantha Kargas, spokesperson for the Department.

She explained, “The investigation resulted from multiple community complaints for illegal cultivation of cannabis. MET deputies located and eradicated approximately 408 growing cannabis plants. Deputies also located one water diversion violation. No arrests were made and the case will be forwarded to the District Attorney’s Office for review.”

She also told us, “Additionally, MET deputies assisted the CA Department of Fish and Wildlife with a search warrant today on Sprowel Creek Road in the Garberville area” and “Our Criminal Investigations Division is conducting follow up on a case and serving a search warrant on a property in the Ettersburg area.”

We have requested more information on the incidents.

Below are all the rest of the marijuana enforcement actions we know of with brief summaries and links to more complete stories if we have them.

(*Note: This property is near the home of this reporter)

Rolling the dice
Reply to  Buster

There has to be a raid everyday from April to December to knock out illegal cultivation local law enforcement heavy millatary presence squads in all 4 corners of Humboldt county north south east west for the law to snuff out the problem until this happens it’s still wide open to roll the dice!

thesteve4761
Reply to  Rolling the dice

Jsteezy
Reply to  Rolling the dice

The places busted in April would replant in May, over, and over, and over. And aaaaalllllllll that enforcement money will have done nothing but keep the price high enough to make it worth growing. Now when they weren’t doing anything.. that’s when the free-for-all of the market broke a lot of people and forced players to the bench. $500/lb for top shelf is just barely worth it, and if your yield sucked, you’re out the game.

Some guy
Reply to  Jsteezy

Spot on.. gear up for $500 lbs when corporate comes to town

For sure
Reply to  Buster

Previously, they identified over 10,000 huge grows. If they busted 3 per day for 5 months, that’s about 450 busts. We know they don’t get anything close to that& therefore, the odds are in favor of the grows….not to mention the re-planting factor.

That was 400 plants between “several” parcels. Are we eradicating peoples personal smoke for Gold Stars and “Atta Boy!!”‘s. At what (low) point does it get the: “planted for personal” endorsement? Or are these people all gas, and no brakes until after Black Friday?

yo you know a place i could work at. im not a cop

The MET cut down my plants in my back yard last year somebody needs to stop this economic carnage that is being inflicted by the humboldt county sheriff department. I worked for 4 years on a permit with the humboldt county planning department they are scamming our community and local culture.

So you give them all your personal information and a map to your garden, and you are surprised that they come and cut it? You are a permit patsy and got what you deserve.

We can only hope that people like you get what you deserve.

I agree it’s all a scam from law enforcement. There ripping community’s apart.

MET that must be for those people who didn’t have a job but had a buddy hi up in the rankings. I wondered how they was gonna handle the new legal weed situation. So they are looking to make money that all it stems to. They do drug and sell drug steal drugs and bust others for doing it psh

With liberty and justice for all

The HCSO managed to successfully turn growers against each other with legalization. Now the legal guys are so bent they got robbed they’re calling in the smart ones who didn’t waste their time and money here. Sour apples.

Permit What Permit?
Reply to  Food for thought

Explain “the legal guys are so bent they got robbed”. Zero, none, zilch, not one legal farm has been robbed by the county. Actually robbed by thugs, maybe. Major cash is being stacked right now. Farms that are not fully permitted have been given a green light to grow and sell on the traditional market. Hell, they don’t even hide it. Look on Instagram and they put it all out there for everyone to see, but the county seems to be blind.

Support the local economy and the community

I wonder if the sheriff’s department is really getting complaints, or are they just saying that. Are people really turning in to snitches? Thats been local protocol for ever! We have quite a few little local rules I don’t tell you my last name you don’t tell me yours I don’t want to know you are responsible for anybody that you bring here and you don’t snitch on your neighbor is it really that people are snitching on other people now or is the sheriff’s department just saying that or is it all these new people that have moved here to make our money cuz if you haven’t noticed there’s a whole hell of a lot of people that have moved up here bought property and are growing pot now and I don’t think they adhere to our local protocol I don’t think they care people don’t understand the black market held this place together forever we provided good paying jobs to locals where else you going to get paid $25 an hour to go water plants or $200 a pound to trim weed and everybody pays their taxes you just claim you’re a contractor and artist you have a… Read more »

DickHertz
Reply to  Support the local economy and the community

This isn’t even scratching the surface of the plants they’ve cut on people that are in-process, trying to get legal and the Board of Supes remains abjectly incompetent, delaying hearings on applications, playing with themselves. What a joke. Life was easier under CAMP. At least they didn’t have names, maps, details and everything else these dirtbags collect for information simply to go cut down someone’s hard work. As directed by the “monied” growers that managed to get the permits ahead of everyone else. Won’t matter in 3 months anyway. The great orange one is fomenting civil war with all his lies. This is going to be a colossal shit show. Time just to cut and run for a few years. Panama and Costa Rica are looking real good.

#growerslivesmatter who is the most qualified lawyer to sue the county?

you know whhere i could work im not a cop

What a joke! Seriously! Catch some real criminals already!

Maybe move to a state where it is legal??

We had a huge influx of “suitcase growers” here in southern Oregon late this spring. Almost all Cali license plates, mostly Hispanic worker bees, all illegal pvc and 2×4 light dep hoop houses on a grand scale, trucked in water. Guess we have to thank northern California law enforcement for that. Another interesting year in the Oregon green industry.

With liberty and justice for all

AND MY EARLIER COMMENT SAID DONT GO VOTE FOR AN INCUMBENT!!!!!

Do they have a FIND THE MISSING CHILDREN enforcement team?

Do they have a FIND THE MISSING/MURDERED WOMEN team?

Find the missing money/property team?
Oh wait, that would actually serve the people, and bolster our economy.

These ppl were growing on someone’s property who had no idea this was going on. Local tweaker crew set up shop. Diverting water, trashing the property. Got busted. Replanted. Got busted again. They terrorize a quiet neighborhood w loud diesel rigs spewing black smoke morning noon and night. No surprise as they consume meth and other substances at the same rate. They have taken over multiple spots in an otherwise beautiful area. What’s funny is that they act as if nobody notices their activities and behavior. Or just don’t care. And the other shoe? Well that has dropped. Nothing will happen and they’ll do it again. There or elsewhere. Sad, really. And this snitching on you’re neighbors bullshit? STFU, because if your neighbors where these human stains, you’d be calling the cops WEEKLY. Different vehicles up and down the road daily and nightly. Not hard to figure out what the deal is. Unless you’re like them and happen to have a bunch of shit you shouldn’t have, and do a bunch of shit you shouldn’t be doing, then no, you don’t see the harm. In this case my solution would be to confront the wrongdoers w the entire neighborhood willing… Read more »

And people aren’t getting it… the way of life here was over when 64 got voted in. It was a fork in the road. Anyone who went down that fork, it was/will be a dead end. National legalization will crush you. It’s just a bandaid that will keep you flush a few more years. But remember you put all your information down on paper for that permit, and the law has a memory and so does the IRS. Everyone thinks they are so clever but they may be letting you spin your web while they watch.

If we were the real deal we would stay outlaw 100%