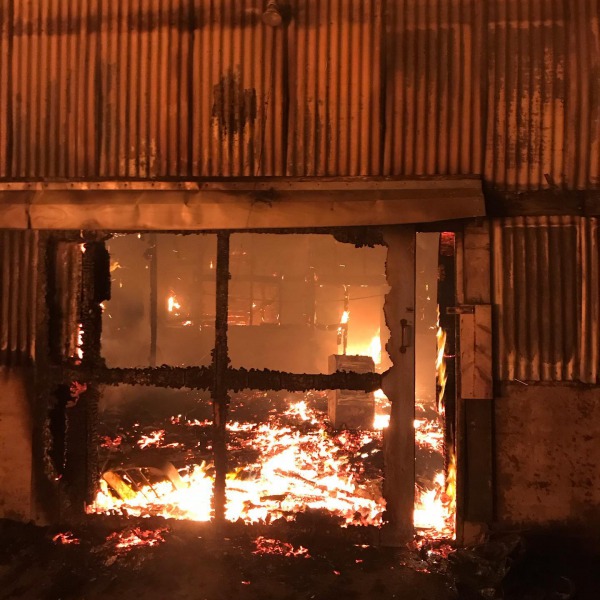 Firefighters are fighting the second barn fire within a week n Mad River Rd in the Arcata Bottoms. [All photos and video from Arcata Fire]

Multiple agencies responded to fight the fire and keep it from spreading to a residence and another barn.  According to a Facebook post from Arcata Fire, “Loleta Water Tender(WT), Fortuna WT, Westhaven WT, Humboldt Bay Fire WT and Chief, Blue Lake WT and Chief, Samoa Engine and Chief, Fieldbrook Engine, Kneeland WT and Chief, two Arcata Engines and two Chiefs are on scene attempting to control the fire… .”

This is the second barn fire within a week. (See here for more on the first fire.) Fire totally destroyed the last barn.

Just before 8 a.m. some resources were being released from the incident which indicates the fire is coming under control. We’ll update when we have more information. 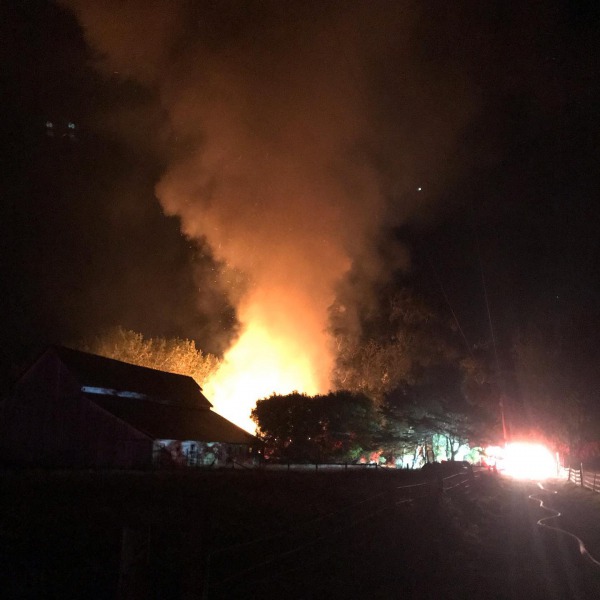 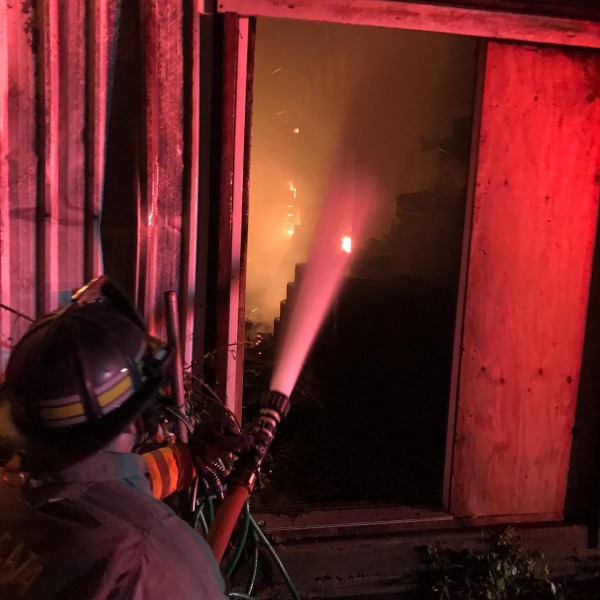 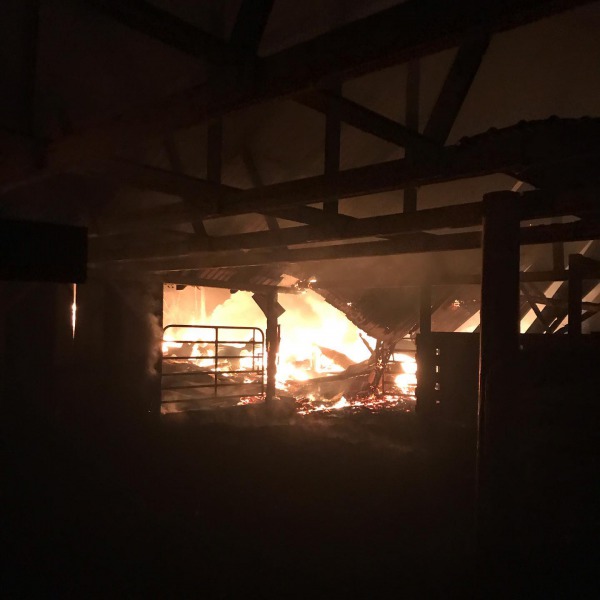 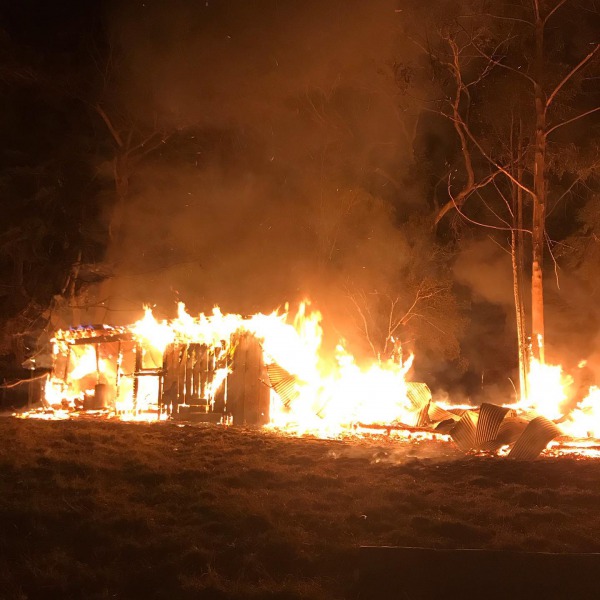 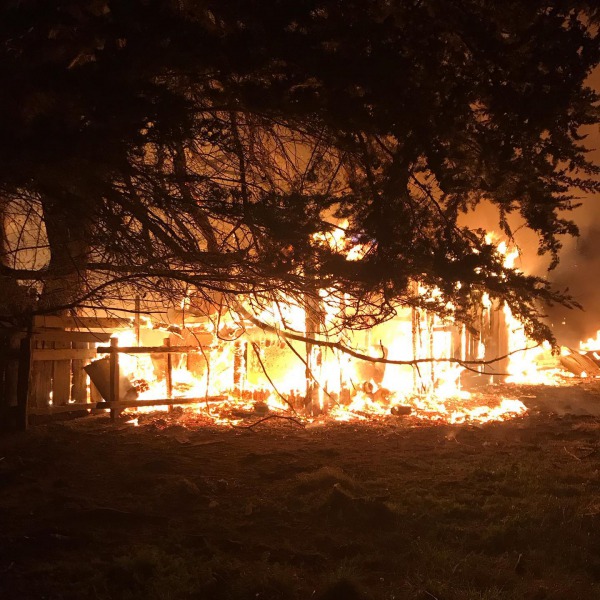 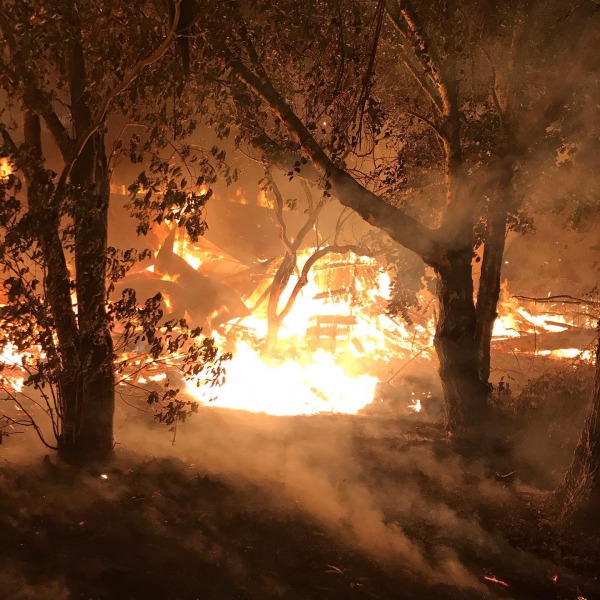 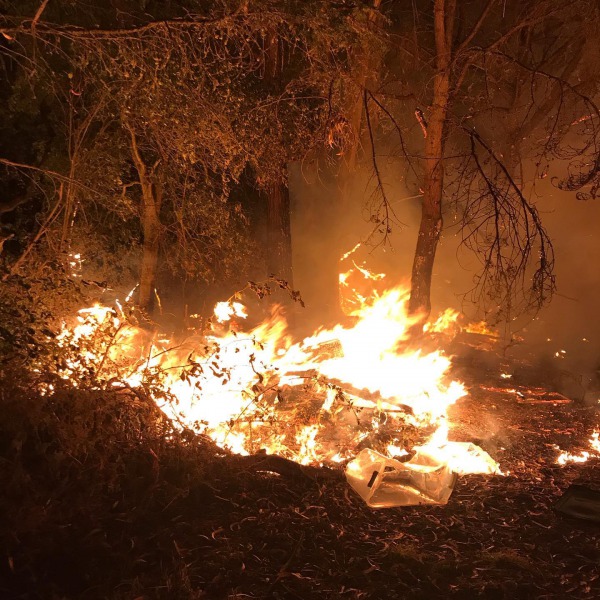 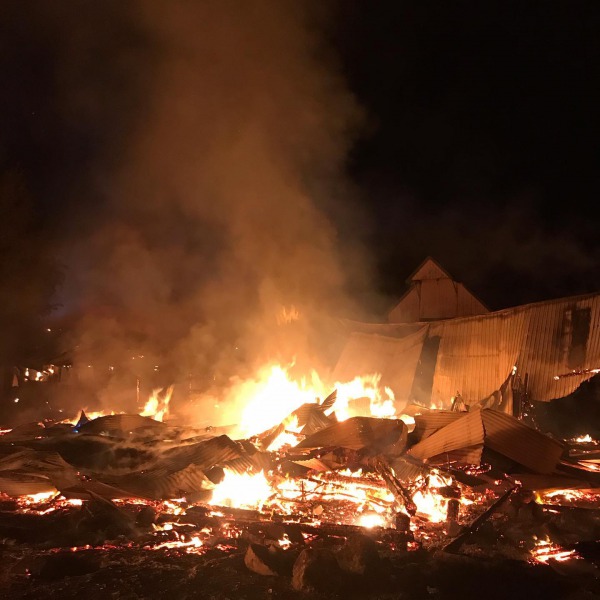 UPDATE 8:43 a.m.: Arcata Fire posted on their Facebook page, “Fire is controlled and mutual aid units are being released. Arcata firefighters are extinguishing hot spots. No injuries reported. We thank our neighboring agencies for their continued support and hard work.”

Coincidence? I think not

Is there some firebug running around?

Was there hay in it? Theres either gonna be hay or an indoor grow right? Or both?
Hay harvested and stored in the same conditions, same general environment, and time of year: if one can spontaneously ignite, why not two?

Have spontaneous hay fires occurred on the Arcata bottoms in the past?

It is entirely possible that for some reason two fires just happened within a short period of time.

I’ve been the victim of arson, though. I guess it is my go to suspicion.

Well its a lot dryer this year than its been in decades. High fire danger and spontaneous combustion are a serious risk and possibility in barns. The risks that most the coastal folks here in Arcata, Eureka, and Fortuna , are dealing with this year. Normally are not as much of a concern. Part of the problem is the dust left over from years of hay and it being dry. That stuff is a serious combustion hazard. So much to the point I kicked up some of it in my own barn recently (which is without hay). Resulting in a small fireball. Just from moving a larger mower in an out of it.

While arson definitely seems to be a problem in this county. Very rarely will agencies officially recognize and talk about it. But lets look at the obvious risks before we start potentially pointing figures and getting folks riled up.

Thank you for the reply. That makes sense. It’s an old habit to think of the Bottoms as one big soggy place and I am guilty of that.

It’s just that two in a week in the same area seems a tad bit suspicious.

Hope your barn stays safe. I need to mention this to my mom, back in MO. They have a hay barn and it’s been hotter than the shades of hell back there lately. It’s the last thing she needs (my dad died in April and she’s been trying to get the farm back in shape after his long illness.) Though I am not sure I should, it might be another worry she doesn’t need. She’s selling the cows this week because pasture is too dry, and she has to get someone to tractor out one of the bales to the pastures. 81, she doesn’t need any of this.

Yeah trying to keep farm lands and property under control is a lot of work for a single person. Even worse when your older and dealing with health problems.

My barn is thankfully empty, with no plans to be refilled anytime soon. But I have been going through the process of cleaning up the dust and putting a remote climate sensor in it, with a fire sensor. In case something happens when we are out or just not paying attention to it.

Hay stacks suffer from the same problem as wood stacks. The weight can cause heat to build up in the center and ignite. I am not even sure of the correct technique for keeping track of it anymore. I think your suppose to probe the both bail and loose stacks for temp and humidity to help keep an eye on it. But its not something I have ever done.

I wpuld eitjer gently warm your Mom, or, even better, just hire someone to clear out the barn.
Thumb Tacks is a good resource, and, some other similar apps on PLAY store. I was, extremely, pleased with thehousekeeping gals I hired from them. They SANITIZED the whole 2 bedroom house- I swear you could eat off the floor. Only $100.!!!

Burning hay is causing the prices of food to go up, milk, meat, etc., because now the farms will have to buy it, and this causes food shortages also. [edit] they are hurting children, and the working poor. Unless the hay self caught, then disreguard the above.

Who Cares
Reply to  Angela Robinson

one more barn goes up and I declare shenanigans !

Farmers are well aware of the dangers of hay spontaneous combusting. They mitigate this by using a layer of salt between rows to keep the bacterial and fungal action, and the heat generation down. Occasionally a farmer will make a mistake and burn down a hay barn, but two in a week seems unlikely….maybe arson…maybe the stereotype of the conservative farmer has made barns a target for the violent antifa anarchist clowns, the same way displaying an American flag has made people targets. The Antifa Clowns, by the way, murdered another man in Portland last night….but, I hope that is not the case. Hopefully it’s just a farmer who’s not very good at salting hay…

Angela Robinson
Reply to  Who Cares

F'Nuts
Reply to  Who Cares

Okay Angela and F’Nuts, but really, people have been targeted by arsonist because they displayed American Flags. Antifa Clowns are burning MANY structures in America right now. Farmers are well aware of the dangers of hay fires, and have managed to keep many barns safe for well over 100 years. I’m not saying this IS arson, but it’s certainly within the realm of possibilities, certainly not ridiculous, or paranoid…And the Violent Antifa Clowns really did murder another man in Portland yesterday….

Angela Robinson
Reply to  Who Cares

So, you know who shot that guy? Because even, so far, the PPD has not announced any arrest. Randos on the internet thinking they have found the guy are just that…randos.

“Antifa clowns” are not out in the countryside burning barns, nor are they attacking Forks.,WA or Coquille, OR. If that was the case, the entire Willamette valley would have been on fire, it’s full of barns.

Most times a firebug is just a fire bug who likes to watch things burn. I know this personally, like I said, because it happened to us.

Those “randos” ID’d the guy who kicked the man in the head a couple of weeks ago, after he intervened when an Antifa mob attacked and robbed a trans person. They were right and the guy ended up surrendering to the police.

The shooting suspect earlier did an interview with Bloomberg:

The distinctive neck tattoo, which you can clearly see in the video, was also seen on shooting-related video frames that were enlarged.

The suspect’s family later rolled on him:

The suspect was arrested earlier on riot-related charges, but the Multnomah County DA sprung him.

The suspect was feted as a hero at a BLM rally after the shooting.

When I posted that, the internet sleuths were posting a picture of an entirely different guy. Who it turns out had nothing to do with this. But the “sleuths” “identified” him from his tattoos as well.

And the man is “under investigation”, not arrest.

Is this where, if I wanted to play tit-for-tat, post th video of Kyle Rittenhouse beating up a girl? It’s adorable.

The arrest was related to an earlier riot, not the shooting.

If you want to go on that Rittenhouse tangent, then I guess the records of the three guys who got shot while assaulting him are relevant. That would be one child molester, one domestic abuser, and one burglar.

LOL…Snopes said it was “unproven”, not “false”.

“”While we can’t say definitively that this person is Rittenhouse, there is plenty of circumstantial evidence to support this claim.””

And I was talking about an earlier man, just yesterday morning who people were saying was the shooter. He was not. But not before his picture was plastered across the web as the shooter.

A man who was “identified” by his tattoos. Which..ooops, was wrong. I said the current “person of interest” has not been charged. Is this not true?

Though, come to think of it, even IF it isn’t Rittenhouse, that should serve as an example of internet vigilantism. Much like what is happening in PDX.

If the person of interest is found to be the shooter, then he should be charged.

Find your headlamp! Lets Ride!
Reply to  Who Cares

You forgot delusional. Time for night patrols? I guess a lil more meth might be ok given the gravity of the situation. Make sure to watch a rerun of Kimberly Guilfoyles speech, then play Flight of tje Valkries as you leave the trailer park on your bike.

Who Cares
Reply to  Find your headlamp! Lets Ride!

Sorry. I don’t fit into YOUR supremacist delusion….

If the hay is not cured properly it can heat and combust – I’d be curious to know if all they hay was from the same source.

My grandpa used to say that to. If it’s put away slightly damp it can cause a fire. Perhaps the farmers bought the hay from the same place

When I was a little girl in North Dakota, the farm family next door would always pull out a handful of put-up hay to smell for heat, every time they went in the hay barn. And the hay itself was carefully cured and inspected to cull moisture-holding weeds. Just like a poorly monitored compost pile, hay will spontaneously ignite a fire. Let’s consider that cause before arson.

I was 47 degrees when we woke up this morning in the bottoms. From posted comments I guess it starts during the heat of the day. Even in 70 degree weather?

Well hold on everybody!
Reply to  Lee Torrence

🕯🌳Damn conspiracies, logic, then more conspiracy then paranoia shit Kym your people need some help,not all you got some pretty righteous one here that aren’t trying to push there own agenda or jump from one side of the fence to the other huh woody boys.

But why Arcata? There are hundreds of hay barns all over with more likelihood of fire.

California hay barns have a monumental heritage to a bygone era. Imagine the hand craftsmanship devoted to their build. Books are in print showing their beautiful stature.

Monuments are under attack in the USA.