‘This is Our World’: A petition calls for the renaming of Arcata streets, removal of historic plaque

A petition with more than 1,000 signatures calls for the renaming of Arcata’s LK Wood Boulevard. [Google Street View]

Watching Black Lives Matter protests sweep across the country, toppling Confederate statues in some cities and spurring America to reconsider its past, Sean Armstrong saw an opportunity to confront legacies of historic racism in his own town.

Armstrong, an Arcata resident and the managing principal for Redwood Energy, created an online petition calling for the renaming of multiple Arcata streets and the removal of a plaque at Camp Curtis. 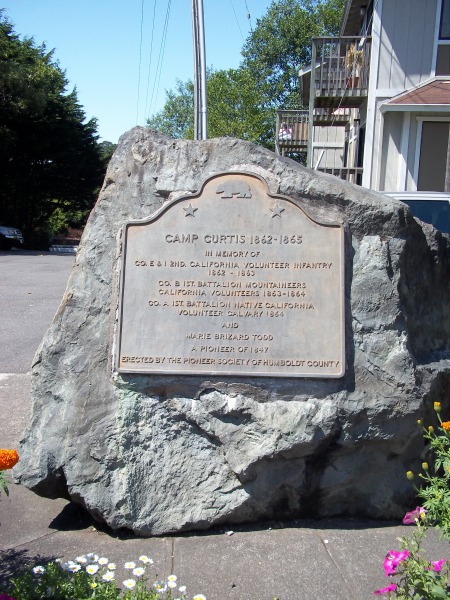 With more than 1,000 signatures, the petition asserts the people commemorated by the landmarks — Lewis Keysor Wood, a farmer with the last name of Janes and the Civil War battalion that was stationed at Camp Curtis — supported the genocide of Native people. On its face, the petition poses a question: What will Arcata do with street names, a plaque and an historic house that commemorate people who promoted genocide? But below its surface, some see it as the beginning of a long conversation about how a town, a community, a county and a country can address long histories of racialized violence.That Humboldt County’s history is steeped in such racist violence is no secret. The 1860 massacre of as many as 250 women, children and elder Wiyot people at Tuluwat Island by a local militia is the most widely known example, but that was part of a long series of massacres and murders, as well as a system of human trafficking, that were part of the attempted genocide of Native people between 1846 and 1873. There are other examples, too, like the 1885 expulsion of hundreds of Chinese from Eureka. Armstrong’s petition consists of three basic assertions: that Janes Road and Janes Creek were named after a farmer who hosted and supported a genocidal militia in Arcata; that LK Wood Boulevard honors a man who managed slaves in Kentucky before coming to Arcata, where he vocally supported a campaign of genocide against Native people; and that Curtis Avenue and a plaque honoring the 1st Battalion California Volunteer Mountaineers should be replaced with a street name and plaque “that grieves for the genocide.” For this story, we consulted local historian Jerry Rohde and local history enthusiast Lynette Mullen. Though they did not vet or take a position on the petition itself, both indicated aspects of its assertions seem to hold true, though others don’t appear fully supported by the historic record, which is a bit thin in places.

For much of the petition, Armstrong cited the 1979 book, Genocide in Northwest California: When Our Worlds Cried, by Hupa scholar and former Humboldt State University professor Jack Norton. Armstrong also used articles by Rohde and a series of letters presumed to be written by Wood.

To start, the petition states that Arcata passed a property tax in 1858 to fund a genocidal militia that camped on Janes Farm and Camp Curtis.

Armstrong cited a webpage indicating the militia housed at Camp Curtis originally had camped on Janes Farm but the page cites no sources, and Armstrong said he needed to do more research on the Janes family — making it the least verifiable assertion in the petition.

Norton’s book — which is out of print, though the Journal reviewed a number of pages provided by Armstrong — notes the property tax. But the book doesn’t appear to specify when the militia formed or what it was called. Rohde, a public-school-teacher-turned-historian, said that after checking his records he could not find a militia formed in Humboldt County in 1858 and funded by local taxes. A group called the “Arcata Guard” was established in 1862, he said, and another located in Arcata dubbed the “Humboldt Guard” was formed in 1874. In the county’s eastern stretches, a group called the “Trinity Rangers” was formed in 1858, he said, but appears to have been funded by the state. The “Humboldt Volunteers,” formed in 1860, were known to murder Native people, Rohde said, adding that the group was never funded by a property tax.

The petition then argues that LK Wood Boulevard commemorates a man who supported genocide.

In 2008, Rohde wrote “The Sonoma Gang” for the Journal, which touched on Wood’s association with the Union Company, which had several members known for murdering Native people. At one point, Wood wrote in apparent frustration against those members of the company and later, as Humboldt County clerk, Wood proposed renaming the town of Union not to Arcata, but to Ki-we-lat-tah, the name of a Native man he seemed to respect.

But Armstrong, who once rented Wood’s house (which still stands in Arcata) shared a series of letters from HSU’s library identified by Mullen that are believed to be written by Wood. The letters clearly supported killing Native people.

“I hope every red skin may be killed,” Wood is believed to have written in one.

The petition then claims Curtis Avenue and the plaque at Camp Curtis honor the 1st Battalion California Volunteer Mountaineers, which committed acts of genocide. Multiple sources and accounts verify this point.

The last part of the petition states that Arcata’s Phillips House Museum commemorates a man who enslaved two Native children. Armstrong cited a list from Norton’s book of local people who held Native people as slaves, which included William Phillips. Armstrong voiced particular frustration about this house, the website of which includes a 1993 local television news video that only mentions “a legend” of Natives who “retaliated” by firing a musket at the building.

Throughout Humboldt County, there are numerous other places named after people who committed atrocities on Native people — Henry Larabee, Seth Kinman and James Henry Brown, to name a few — that are not addressed by the petition. Armstrong said he knows of these but, as a resident of Arcata, wanted to focus on things within city limits first.

Armstrong said it was his Native heritage, in part, that pushed him to create the petition, saying he couldn’t accept that anyone of Native descent might have to walk through a town with the names of people who contributed to their attempted genocide posted on street signs or commemorated on a plaque. 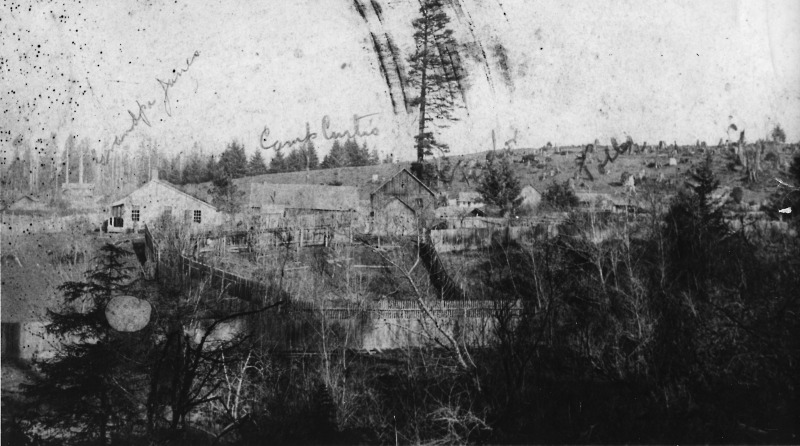 A historic photo shows Camp Curtis, which sat in the hills of Arcata from 1862 to 1865 and housed the 1st Battalion California Volunteer Mountaineers, which committed acts of genocide. [Image from Wikimedia Commons]

Despite the petition’s more than 1,000 signatures, some question its approach.Kerri Malloy, a Yurok and Karuk Native American studies lecturer at Humboldt State University, didn’t oppose the petition. But he did challenge it.“I’ll say the same thing as when the McKinley statue was taken down: Did it really change attitudes and minds? I don’t think it did,” Malloy said. “I mean, it’s gone. That’s fine. But what’s the follow-up action to that? Where’s the community dialogue?”Armstrong agreed that the community should do more than change street names — but said it is a start, adding that he also plans to donate some of the land he owns to a local Native family and supports broader reparations.Arcata Mayor Michael Winkler said he would rather the focus be on a reconciliation program like those implemented in South Africa post-apartheid or in Germany after World War II.

“I feel that with rare exceptions such as removing Confederate flags and statues of Confederate leaders and generals, that renamings are the start of an unendable process,” Winkler wrote in an email. “At most, I would support interpretive signs that, for instance, describe local historical figures such as [George Zehndner, a local rancher who commissioned the McKinley statue and participated in the enslaving of Native people] and LK Wood, who they were, what they did and the historical context in which they existed.”

Winkler said he fears the renaming conversation is a slippery slope and “if you take things to the ultimate extreme,” the “entire existence of the United States could be considered illegitimate.” But Armstrong and other activists might hope for that exact slope, or at least one that leads to the recognition of past wrongs and a return of Native land.

She pointed to the McKinley statue, noting its removal hasn’t drastically affected the community, and even further back to when Arcata changed its name from Union. To her, changing local names is neither pointless nor overpowering — it’s about bringing Native considerations to the table in a community and country that have historically only presented a “Disneyland version” of history.

As far as the plaques Winkler suggested, Risling Baldy said while learning history is important, she feels plaques focusing on white people who killed Natives would give the wrong spotlight.

With enough public pressure, the Arcata City Council could change the names or remove the plaque. Or it could put forward a ballot measure to let voters decide, as the council did with the McKinley statue. Or, if public interest wanes, the petition could disappear into the depths of the www.change.org servers — which seems possible, as the petition has grown stagnant this month.

No matter what comes of the petition, Risling Baldy, Armstrong and others said they will continue to push these issues forward.

“This is our world,” Risling Baldy said. “And we’re going to do whatever thing we have to do to move in that direction. And it might take a while. But we are signing up for that because this is our world.”

James Wilde (he/him) is a freelance journalist living in Arcata.

Editor’s note: This story has been updated to correct an inaccurate paraphrasing of local historian Jerry Rohde’s comments and to make clear that neither Rohde nor local history enthusiast Lynette Mullen conducted a thorough vetting of or took a position on the petition. The North Coast Journal regrets the error and any confusion caused by the prior version of this story.

The Community Voices Coalition is a project funded by Humboldt Area Foundation and Wild Rivers Community Foundation to support local journalism. This story was produced by the North Coast Journal newsroom with full editorial independence and control.