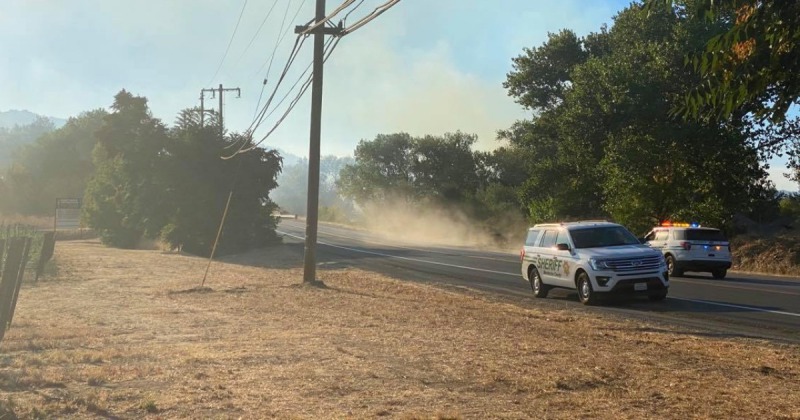 Law enforcement at the scene of an arson fire near Ukiah. [Crop of a photo by Matt LaFever]

On 08-12-2020 at 4:55 PM Mendocino County Sheriff’s Deputies were dispatched to a fire on South Dora Street near the intersection of Fircrest Drive in Ukiah, California.

As Deputies were arriving at the scene, a separate fire was reported on Gobalet Lane near South Street Street approximately 1.5 miles to the south.

As Deputies were also arriving at this scene, they noticed another fire on Highway 253 near South State Street which was approximately 1/2 mile to the south.

Deputies began providing evacuation warnings to the public located in these areas when another fire was reported on Plant Road near Taylor Drive in the approximate area to the fires on Gobalet Lane and Highway 253.

As Deputies were contacting the public they learned several people had seen a person who they believed was intentionally starting the fires.

This person was reportedly a Native American or Hispanic adult male.  He was described has having a ponytail, wearing black clothing and riding a bicycle.

For approximately two hours, several people matching the person’s description were contacted by law enforcement personnel but the contacts did not yield the person suspected of committing the acts of arson.

During the two hour period, there were three additional fires with two being located at the end of Airport Park Boulevard and one being located on Babcock Lane near the Talmage bridge.

Personnel from CALFIRE, the Ukiah Valley Fire Authority and Hopland Fire Department responded quickly to each fire scene.  Once arriving they were able to quickly contain the spread of the fires and were successful in get them extinguished.

Sheriff’s Detectives are continuing investigations into the fires which are believed to be acts of arson at this time.

Investigators are asking for the public’s assistance in identifying the person who is believed to have committed these acts of arson.

If anyone living in the following areas has security camera footage of the outside of their home depicting the person described in this press release, during the time frame of 4:50 PM to 6:57 PM on 08-12-2020, then please contact the Sheriff’s Office Tipline by calling 707-234-2100.

The areas of interest for security camera footage are:

UPDATE: Man Accused of Lighting Six Fires in and Around Ukiah Yesterday Arrested This Morning