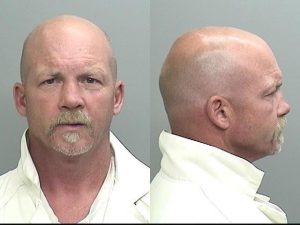 On 07-04-2020 at about 8:10 AM Mendocino County Sheriff’s Deputies were dispatched to contact an adult female regarding a physical assault in Laytonville, California.

Upon their arrival Deputies located the adult female being treated by Laytonville Fire personnel. The adult female had visible injuries to her face and body which were bleeding, consistent with being physically assaulted.

The Deputies learned the adult female was in a romantic dating relationship with Aaron Gomez for numerous years and the incident took place at a residence in the 59000 block of Bell Springs Road.

On 07-04-2020 in the early morning hours, the adult female and Gomez got into an argument wherein she tried to leave the residence.

The adult female stopped her vehicle and Gomez reached inside and grabbed her by the hair.  Gomez then struck her with his fist.

The adult female fled the area in her vehicle and drove to Laytonville for medical assistance.

Deputies also learned of an unreported domestic violence incident between the couple.

Reportedly in June 2020, Gomez got upset because he could not find his duct tape. There was a verbal exchange and Gomez pushed the adult female into a wooden railing on the porch of their residence.

Gomez pushed the adult female down onto her back where he put his hand on her neck and choked her.  The adult female fought back and Gomez struck her one time with each of his hands causing her to lose consciousness.

When she woke up Gomez’s boot was on her face and Gomez threatened to hit the adult female’s dog with a shovel. The adult female got between the dog and Gomez and he hit her in the right side of the body with the shovel.

The Deputies noticed injuries on the adult female’s body consistent with the reported physical assault from June 2020.

On 07-05-2020 Deputies were able to locate Gomez at his residence and placed him under arrest on the listed charges.

Gomez was booked into the Mendocino County Jail where he was to be held in lieu of $30,000.00 bail.