Woman Arrested for DUI After Fatal Crash on Hwy 3 Today 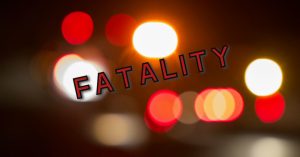 Press release from the CHP:

On 05/23/2020 at approximately 5:55 PM, California Highway Patrol Dispatch was notified of a solo vehicle crash on SR-3 south Slate Creek Road. California Highway Patrol, Trinity County Sheriff, Trinity County Life Support, and Cal-Fire all responded to the scene. Upon arrival, it was determined that Romero-Garcia was driving a 2008 Chevy pickup southbound on SR-3 at at unknown high rate of speed. Romero-Garcia allowed the Chevy to cross left over the double yellow lines and then back to the right where the Chevy left the roadway and collided with trees. The right front passenger was pronounced deceased at the scene (identity pending notification). Romero-Garcia was transported to Mercy Medical Center in Redding for injuries sustained in the crash. Romero-Garcia was placed under arrest for suspicion of driving under the influence of alcohol and causing injury or death.
The CHP Trinity River Area Office is continuing to investigate this collision and asks anyone who may have information to contact the Trinity River Area CHP Office at 530-623-3832.