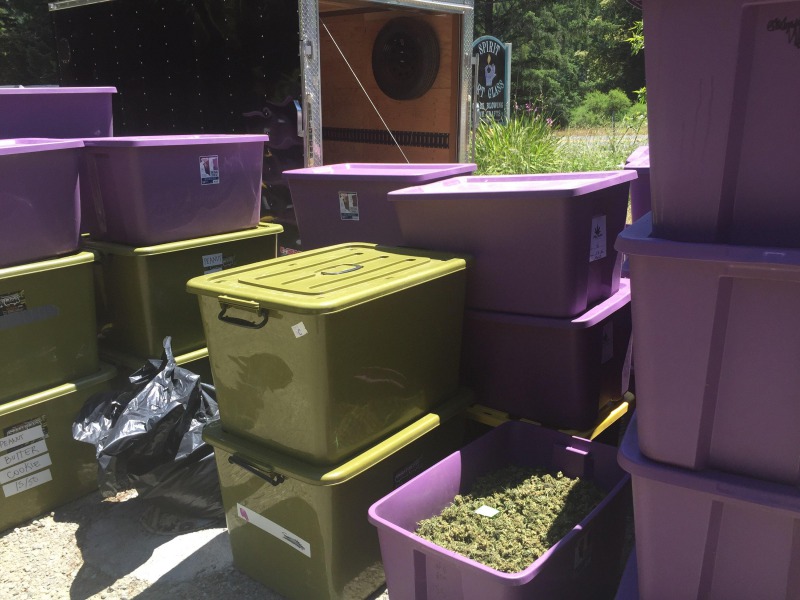 Marijuana, found during a traffic stop near Miranda in Humboldt County, shown in an open tote. [Photo from a reader]

This is a press release from the California Highway Patrol. The information has not been proven in a court of law and any individuals described should be presumed innocent until proven guilty:

On May 21, 2020, at approximately 1205 hours, Humboldt Communications Center received a call reporting a vehicle towing a cargo trailer, driving recklessly on US-101 near Redcrest, causing a minor collision. Garberville Area officers located the vehicle and conducted a traffic stop on SR-254 at Maple Hills Road. Upon contacting the driver (Manuel Turchan) an investigation was conducted where approximately 778 lbs of processed marijuana was located inside the cargo trailer.

Deputies from the Humboldt County Sheriff’s Office assisted with the traffic stop The driver was cited and released.

UPDATE: To clarify and quell some rumors, the marijuana was confiscated and the vehicle and the trailer were released to the driver.

After you work your ass off to grow that much weed be sure and hire a non-idiot to transport it.

Eh. No big deal, just well over a million dollars in product, the season is still young.

🕯🌳All I can do is laugh. I smoke and hate to see so much good shit go to waste but there’s so many stupid criminals in Humboldt this is what happens. They drive trailers that can be picked up by satellite’s. Then they drive stupid. What a waste. 🖖🌍🐸And what’s with all these totes, you people don’t think they haven’t looked into large sales of them,idiot’s. 🇺🇸🇺🇸🇺🇸What’s with the purple totes.🇺🇸🇺🇸🇺🇸

Can bread be stupid? I thought bread was just bread.

Totes are the least of the problem. They work well and prevent crushing and moisture damage. It’s legal to buy them and no paper trail if you pay cash and buy from different stores. No record or reporting requirements. No problemo.

What IS idiotic is hiring morons for drivers or having unregistered rigs or not having regulation lights like brakes, turn signals, plate lights.

🕯🌳There you go they look suspicious going down the road. To plain. Need to make them look more like a work trailer than a weed trailer. 🐸🌍🖖

I always thought that the clean cut guy with a new giant truck, with no tools and no dirt was always a dead give away.

You realize uhaul charges 3-6 bucks for a cardboard box, right? At $8 from Costco, and now everywhere really, it’s a realistic move if you’re moving and would rather invest a couple hundred bucks into stackable totes for your stuff than cardboard you’ll likely recycle because it doesn’t move or store nearly as well. So the idea that they’re being tracked is a jahaooke.

Also, it’s hard to tell by the wording, but they fled the scene right? Caused a minor traffic accident and then were located? Am I correct Kim?

So of course they searched it lol

That is my understanding of the press release.

Might not even have been aware of the accident he caused.

I guess you’re new to the game. Buyers don’t like the smell of cardboard on the weed and if the weed is properly cured it will soak more moisture out of the Properly cured weed and make it to dry and it will smell like cardboard they don’t even want you using paper bags wake up.

You need a Bulgarian flag willi….

Is that a new brand of chips?

Guest
The Collector
Reply to  thesteve4761

I’ve been hooked on heroine since I was a kid, her name is Wonder Woman.

Guest
FanOfGuest
Reply to  The Collector

No soup OR bread for THAT driver!

What happens to the confiscated marijuana? Can the law enforcement agencies sell it?

Get pulled over in Utah hauling that load and see if cannabis is legal.

No. California did, idiot.

I love these totes. Such pretty colors. Where to get them at???!!!

Technically, it doesn’t matter if the cannabis was grown legally because the growers can not transport it without a distribution license. These legal and semi legal farms are having trouble doing things the new way. Take for example my neighbors. County permit, no state. Drives in clones bought outside of the mtrc system, plants in a deforested dirt patch, runs generators at night and lights with no cover. They also don’t have permitted water. Why does the county not enforce rules? I know the answer. They want that tax money more than they want compliance. The county should be held liable for the environmental damage they have allowed to take place and in most cases permit such damage.

It might not be true but from what people say that live really close that they were so bummed sitting there for hours trying to make sure that the count and paper work was wrong, but they weighed the totes one by one and and then got to Watch them load em back up and drive away not in the sheriff trailer, and with a ticket in hand?!?!

So less than 800 lbs. fits some loophole in transportation laws?

This guy is an A-1 dirt bag. He and his chick are meth heads who tried to rob us. They lost custody of her kids. And spent a little time in state prison. Now he’s out doing the same thing. He deserves to be in prison. And quite frankly so does she.

That’s Skip. He will never change.

60-Year-Old Ukiah Man Found Not Guilty of DUI Because...He Had to Do It

Love the part about “preventing evil”

60-Year-Old Ukiah Man Found Not Guilty of DUI Because...He Had to Do It

“6. The defendant did not substantially contribute to ...

Must be all of that dangerous left wing inflammatory social ...

It’s an interesting question. I do get the sense, fro...

Supply and demand. You should have paid better attention in ...